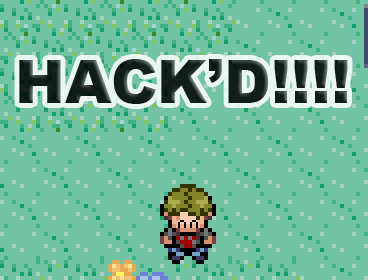 THAT'S RIGHT, MY AWESOME HACKING SKILLZ GOT ME INTO SMARTSPRITER'S ACCOUNT! NOW WE'RE GONNA HAVE FUN WITH THIS! ;O

Oh yeah, in case you don't know who I am, the name's Peter, an Internet buddy of Kyle, who doesn't know I hacked him. Hee hee hee.

Also, why don't you go view some stuff I've done. It's not like this comic will ever update. Besides, my comics beat his comic in every single way! =O EVERY… SINGLE… WAY!!!!!

My Mario Comic: What The Fucking Shit Fuck Ass Fuck Is Mario Gonna Do Now

My Comic Short Collection: I pretty much wanted it to be nameless, however. D=

Oh, and also check out my DevArt gallery while you're at it: DO EET!


PS. I haven't really hacked into Double S's account. He accidently told me (and Kevin) his password, and he didn't mind me doing this. (And I couldn't resist either. xD) Ask Kyle himself, he can confirm it.

EDIT: He also said he'll stop updating this, and will eventually delete it. ;O

[quote=Dix]Oh, in addition: I don't even frequent DD any more. My only interest in DD at all is to check Kevin Clifford's guest comic of the day, and you can find me commenting there.[/quote] Dix's new account can be found at: [url]http://user.drunkduck.com/SoulSymph[/url] Not sure why he hasn't posted this here yet, just noticed it myself so I figured I should :(

Ohai can i has money

No son, I am disappoint.

What was the point of even bothering to reply, Omega? You were more than half a year late.

Oh, in addition: I don't even frequent DD any more. My only interest in DD at all is to check Kevin Clifford's guest comic of the day, and you can find me commenting there. Heck, that's the closest you're gonna get to seeing me possibly sprite or draw a comic any time soon: guest comics for Kevin's Pokemon Heroes. I've already made one and who knows, I may make another some day. No, I'm not doing to delete this comic. It's staying up in case anyone wants to read it, and nothing's going to bring it down unless an admin decides to do some cleaning up or the DD database crashes. No, I'd prefer nobody did the comic for me. As for Pokemon sprite comic-ists who may want to base anything off any of my ideas, please only do it if you're confident, CONFIDENT that it's not gonna suck. Please. Let's be modest and realistic, guys. And you do decide to use any ideas, please give credit. Or at the very least say "I didn't make this stuff up myself, I'm basing it off of something else." Let your readers know you for who you are.

In case anyone happens to stumble upon this: No, as far I have planned, I am not updating this comic ever again. Yes, I've quit spriting for good. No, I'm not starting WWIV again (I did want to, but my mind has changed.) Don't expect any comics from me for a long long time. If anything I might start doing comics in a year or more from now. So...if you can wait more than a year, come back and bother me then at Pixelpro20 (that's my AIM.) Now stop wasting your time commenting on this dead comic, guys. -Pixel

[quote= OmegaProtoman] y dont u do the comic 4 him? [/quote] Sure, I'll do it. That is, if you want a good comic ruined! I was being sarcastic by the way.

i was just kiddin it was a south park joke

Shut the fuck up you racist cunt, Im half Jewish, If I knew where you were from, I would Hunt you down and shoot you.

Kyle quit not only the comic, but he also quit spriting period. There's no reason for him to keep up his sprite comic. Supposedly he's gonna start drawing one of his old comics about... World War 4 or someshit, so look for that, I guess.

He better not delete this comic, that'd be about the dumbest desicion he's made. Why would anyone delete their comic? Unless if it was absolutely terrible, then there would be a reason to delete it. This comic is not terrible, I know, I've read the entire comic. DO NOT DELETE IT SMARTSPRITER!

This comic's really gonna be gone? He don't have to keep it going, but don't delete it.

..Since I knew his password before that, does that mean I actually did hack him? D=

tell him to update NOW !