(online) posts: 29 joined: 1-24-2008
Ah awesome, I need to come up with a scene then as soon as i get time (doing homework atm ;_;), so the next person under will be assigned the scenes I pick out? And does the character appearing in Pit's comic has to be the same that the next replaces? (:

Use whatever character you like. Doesn't have to be the same. It's up to you.

TLDR setting: You find a homeless man in the park and he's being attacked
by a random guy hating on homeless, so you kick his ass (or whatever reaction you want) then proceed to carry the hobo home after he pass out.

The character you're swapping with is Crystal Belune (the girl, she's a transwoman but its not really super important for your character to be it since saying ‘you’re no woman to me' can be used on any girl/guy as an insult).
If you want to just do the first page that's ok too. 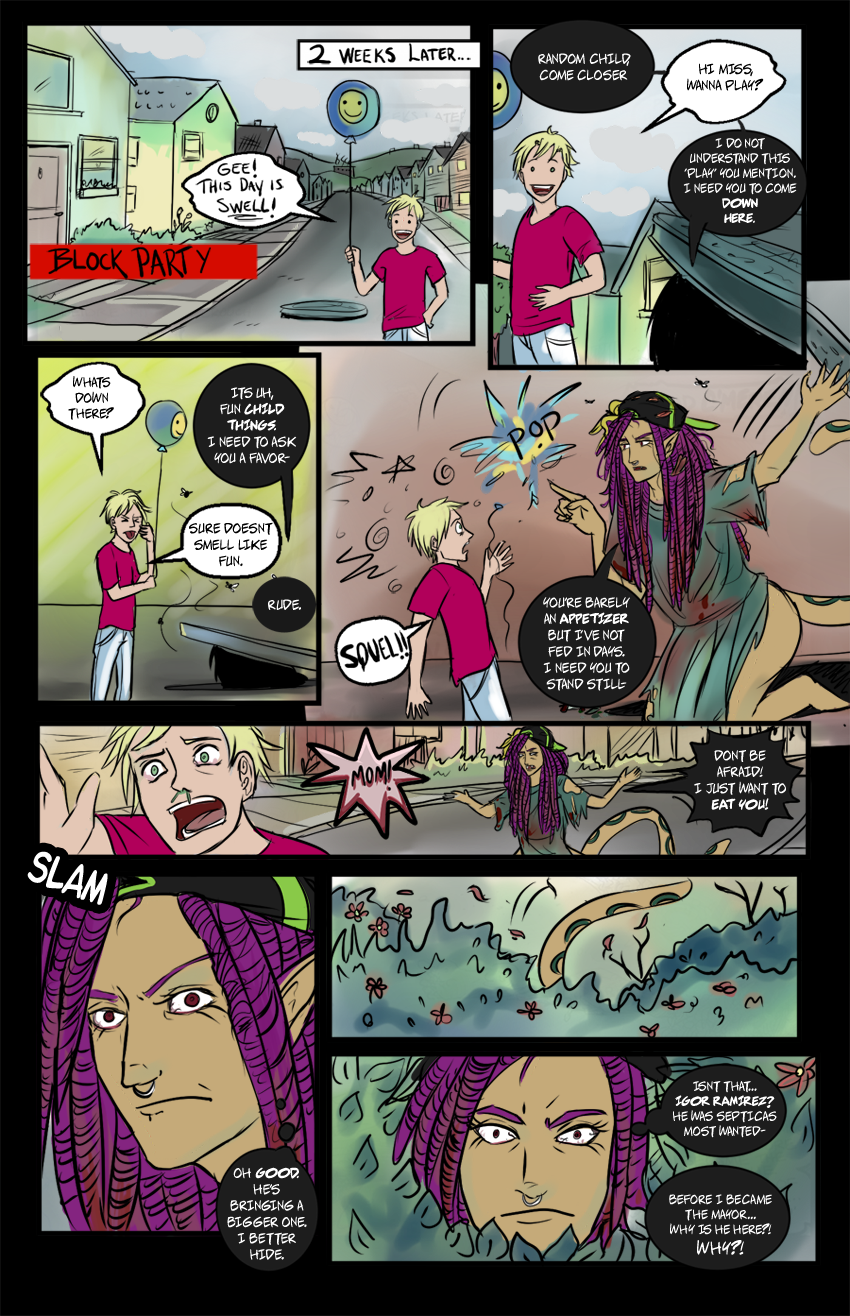 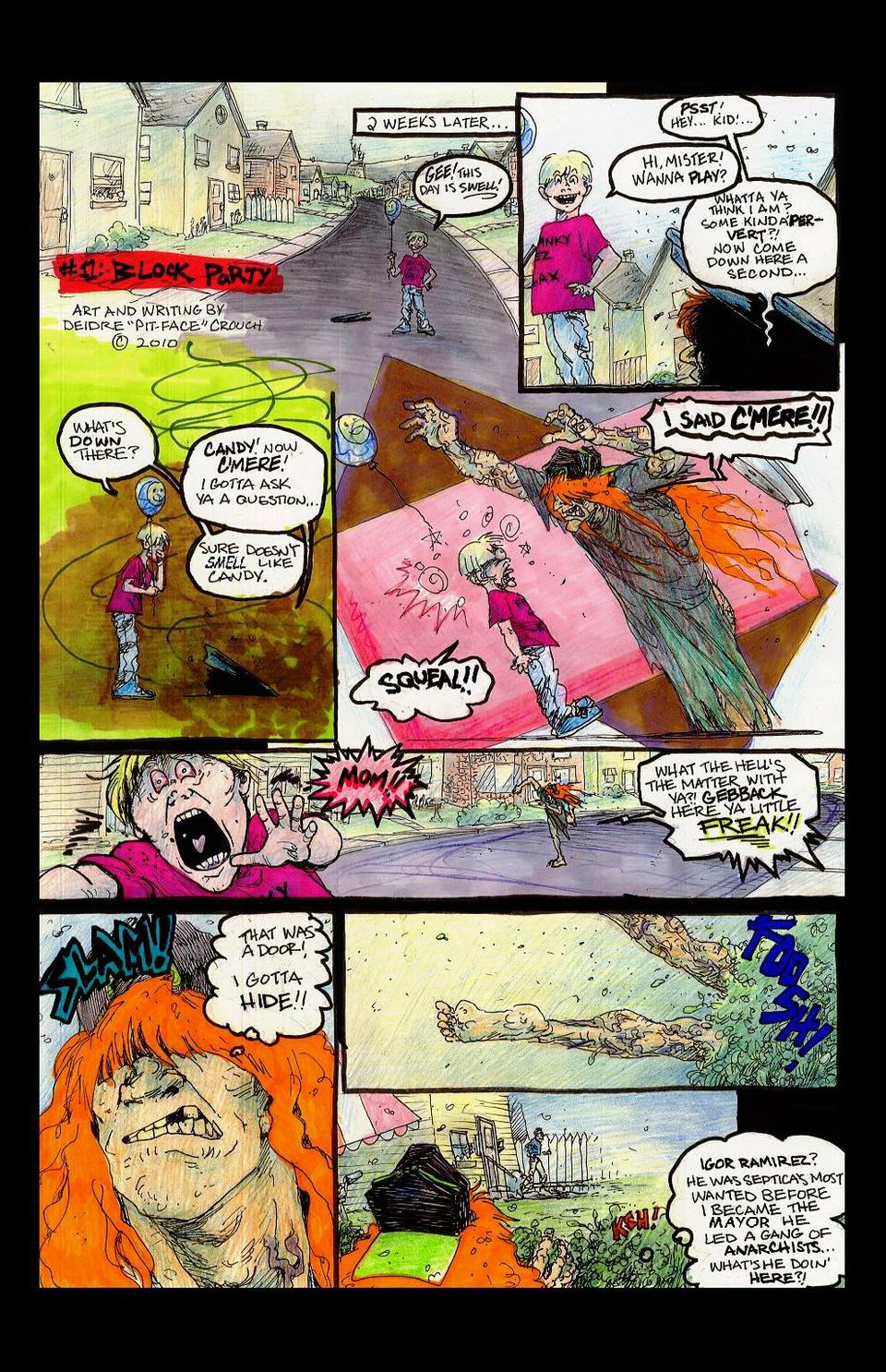 Here is my second page.

It's “a scene” assignment, which everyone has translated as around two pages. (Typically, one page sets it up and the second is more of the reaction – which is more likely to change drastically depending on the character.)

Also my two pages would be:

Just because I like to watch the world burn.

I remember that scene from Putrid Meat and I still didn't recognise Urdyr's version at first. xD

EDIT: I remember that scene from Torn Vines too and look forward to seeing what comes of it.

(online) posts: 29 joined: 1-24-2008
Haha! I read Putrid meat first to get the entire point of the scene, at first glance of those pages i was a bit confused why he yelled at that kid and then after reading the story It made alot of sense…
The next page is a bit on hold right now but ill put it up when I can!
link
cdmalcolm1 at 6:02PM, Sept. 15, 2016

(online) posts: 2,774 joined: 4-21-2007
Wasnt alot of time to color these right now, so sorry about that. But the next one I'do it! Here's Bones in the place of Seiko for Used Books pages these: Your text to link here…

and Your text to link here…

(online) posts: 2,774 joined: 4-21-2007
Ill take Internecinevisuals. I actually have a character named Charlotte in PM, so Ill swap Charlotte for a Charlotte, lol.

The pages i'll put up for auction aaaarreee—-

and for this, you get to swap out TWO characters. In the scene, Bones imagines a confrontation from his personal hero while trying to deal with the possible loss of his city. Yer…ehr…quest…is not only to replace Bones, but also Paul Baloff with who your character that you'd select would look up to and appear to em in a time like this. What would THEY say or do?

usedbooks wrote:
Hahaha. I love it. I could see that happening.

(Link http://www.theduckwebcomics.com/PUTRID_MEAT/5226069/)
Here's the first page, I have to see if i get the second done too eventually.
I decided to put Celia as Bones from Putrid meat.
I didnt get the tshirt the kid wore (text) so i left it blank.
This was fun!

usedbooks wrote:
Hahaha. I love it. I could see that happening.

Sometimes. Non-threatening is not always problem-solving. Having meaner friends helps. XD (Not pissing people off is her only talent.)

I thought these pages would be perfect for my Character SolarCell. I couldn't ask for better pages; action and getting the feeling of Udyr writing style, perfect. I love drawing this page. Sorry I took so long. Just hope you all like it. The second pages will be delayed as well. But I will post it ASAP. So, Enjoy.
link
PIT_FACE at 6:23AM, Nov. 12, 2016