(online) posts: 3,248 joined: 2-24-2007
I'm watching Innerspace, which is a childhood favorite of mine. I just realized that in the first five minutes, various characters say the full name of the main character, Tuck Pendleton, at least half a dozen times (including Tuck himself, twice).

It got me to think about revealing characters' names in works. It's something you generally like to do for the main character(s) near the first scene (usually delayed in media res), and it made me think about how that affects the first scenes of a work. I mean, we need to know who these people are, have a label in our heads for them. It's kind of a crucial step to the empathy and immersion process. In comics and TV shows, names have to be recalled on a regular basis for new readers and viewers.

Full names aren't used that often in real life. Most works have the characters called by a first name or nickname early on, and add the full name by a natural means later. If the full name is needed, it is often done through introductions at a social event or announcing a speaker or the character third-personing himself (“No one messes with Tom Whozits!”) or have one character use his first name and then another call him Mr. Lastname. 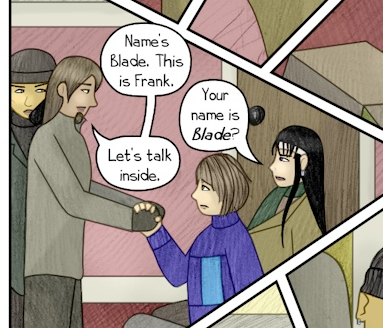 Some go overboard. I watched an anime series called Get Backers where every character has both a full name and a claim-to-fame nickname (The Lightning Emperor, Lady Poison, etc.), and I swear every character has to say both of them in every scene. And other characters will say both names of each of their companions on a regular basis. It is beyond excessive.

When reading others' works for the first time, I notice myself sometimes flipping through many many pages of archives trying to find a name to refer to a character so I can mention him in a comment (or if I'm doing an art trade). I love when comics have character lists/bios to supplement their work. Even if it's only a cast of two or three, it helps immensely with having that identity to be able to discuss or comment on the work as a new reader.

I don't put conscious thought into when my characters use names first or how often. I try to have them speak naturally. But now I'm starting to wonder how often I “remind” readers of characters' names in my work and how long a new character exists before he is identified by name. (I maintain character lists/bios for my comic as well.)


What are your thoughts on this? Have you ever noticed how and when your characters address each other (and themselves) by name?

Does the first person who addresses a new character use his name?

Do other characters talk about the character before his intro, giving him a name before he has a face?

Is he introduced at a party or to someone else using his full name?

Does the character use his own name before anyone else (and what could this mean about the person – is he self-absorbed like Tuck Pendleton ;) )?

Does the character remain mysteriously nameless for a scene or two? (I noticed this happens in action scenes, especially for the mysterious badass who saves the day.)

How often do you remind readers about your characters' names?

(online) posts: 795 joined: 5-15-2012
I have characters use names during speech much more than happens in RL conversations. When reading other works that have many characters, even ones that I've followed a long time, I've found that frequent mention of names helps me keep the characters straight in my head, so I follow that rule myself (plus, for some reason the conversation sounds cooler in my head to do it… :))

(online) posts: 3,248 joined: 2-24-2007
Frequent use of names is definitely less distracting in comics than it is on TV. Maybe the problem with anime is when it is taken too directly from a manga.

(offline) posts: 5,284 joined: 1-21-2008
One way around it is to use military settings where you're constantly called by name. At least two comics I have done had characters whose first name was never revealed.

A good way to reveal a character's name is formal introductions as said before or someone calling out to them, as a warning perhaps. “Hey Joe, watch out for that!” When you introduce a setting, introduce the characters native to that setting.

The protagonist walks in and greets people. Or is greeted. Introductions. And every time they go back, they'll ask the person there what's going on and call them by name because that's what you do if you want a specific person to answer.

You know in customer service and good communications, if you learn someone's name, you should use it to establish a bond with that person. So calling someone more often by nameis actually a good habit to get into.

(online) posts: 3,248 joined: 2-24-2007
An interesting gimmick is a character who has no name or you don't get to know it. Like 99 from Get Smart or MacGyver's first name (until the last season). Honestly, it's kinda aggravating. In a series, you can see how awkward it is to write for an extended time. At least after a few seasons, Max could introduce 99 as “Mrs. Maxwell Smart.” At least those examples have something you can call them.

There are also espionage stories where you are introduced to an alias or two before you learn the character's real name (if you ever do). Or you find out someone had a different name once. (I watched the classic Charade last week. The main character uses four different names.)

It's really disorienting to read/watch a story where a main character has no name or even nickname to be known by for a few scenes in. (And in webcomic, that effect can happen at any point to a new reader.)

(offline) posts: 5,284 joined: 1-21-2008
It's a trope in war movies (because it happened time and time again in real life) the guy who saves your life or you fight with for a whole campaign and you never knew his first name or his real name until you collect his dog tags or bundle up the belongings for the next of kin. That's real life. No one outside my family called me by my first name until high school. Some kids actually thought Willoughby was my first name !

Knowing the name of someone or everyone is a literary convention so the audience knows and identifies with characters. It's not necessarily what we do in real life. I was taught to for good communications and personal service but think of all the people you see every day and how many do you know their full name?

Just as it is in real life so it can be in a story. You never have to know if Ash is his first or last name to identify with the protagonist in Evil Dead So many iconic fictional characters only have names in the script and the author's notes. It's never in the movie or series.

Think how many first person narratives (And others) have an unnamed protagonist?

I even parodied it in Attack of the Robofemoids where one soldier complains that he doesn't even have a name in the script so how could he possibly survive.

Just things to think about. I'm not really on one side or the other. I have lists for my own use and my most recent comics all had cast lists in them but I read War and Peace twice without keeping track of the names. After having seen five film and TV adaptations I finally have them all straight. Before that just went with faces and enjoyed the story. It's fiction. I come prepared to buy into whatever the creator is willing to give me.

(online) posts: 27,520 joined: 1-2-2004
I think it's really a cultural thing, how you use names.
With a lot of cultures close friends and family will never call you by your given names, instead you'll have a familiar name (nickname) they you would have been given as a child or picked up along the way. Only strangers will use the full name.

My Dad, for instance has always been “Damien” to my family and to his friends- or Damie, or Damo. Maaaaybe “Damien Morris” if people want to get formal.
But his real name is Robert. Only complete strangers call him that.

For me most of my online friends call me “Oz”, “Ozzy”, or “Ozone”. Even when we meet in real life. It's comfortable. Calling me “Michael” or “Mike” sounds really awkward.
My family has always called me “Tod”, or “Toddy”.


In comics I like characters to use names to refer to each other, but nicknames are often more natural to use.

(online) posts: 3,248 joined: 2-24-2007
My supervisor calls me Victoria. It drives me nuts. Especially since he asked the first day what I liked to be called. I even sign all my professional correspondence “Vickie.” If it was just his calling me that, it wouldn't be so bad. But he ordered all of us new name tags… I wear my old “Vickie” ones. -_-

A couple of my Used Books characters have acquired pet names and nicknames. Plus, one antagonist calls all women things like doll, sweetheart, darling, etc.