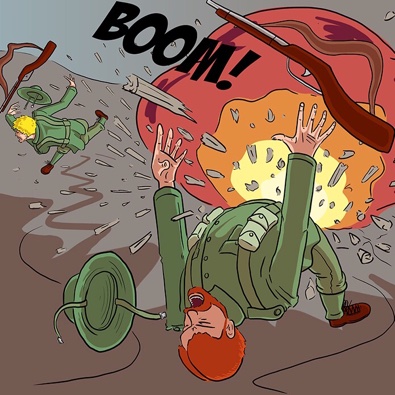 The backdrop of this comic is the Marne River in France, 1918. A group of WWI soldiers hear the sounds of bombs blasting outside and prepare to enter the front lines of a battle. In an interesting team, we have Finnegan, the red-haired and bearded gentleman, and the blonde haired, blue-eyed Hertz. Immediately after arrival, an explosion goes off leaving the two covered in shrapnel and Hertz badly wounded. There is a twist, the doctors are about to uncover a secret Hertz has been hiding all along.

This collaboration comic is drawn by a two person team, Nic and Ben. A lot of one hundred year old research on WWI has been studied for this comic. The art is drawn and colored digitally.

Discover the recently revealed secret of Hertz and read Potato and Kraut by NicAndBen, rated T!

Wow, thank you SO much! We are both a combination of humbled, flattered and honored that you would feature our comic! And thanks to everyone who reads it. You lovely folks make our day :D

I definitely gotta read this!

Ive been following this one on and off for a while. Very appropriate to feature it on ANZAC Day for New Zealand and Australia 😁

This looks very interesting! Congratulations! I'll be checking it out.