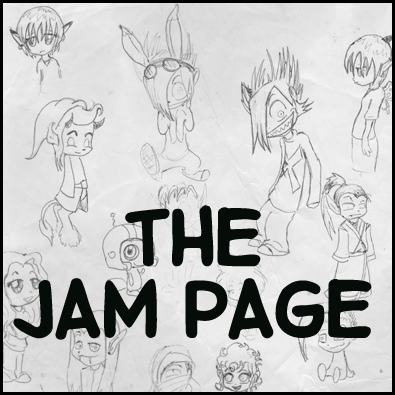 Not all ideas start fully formed. Look at any character which is drawn over a long period of time and you'll almost always see changes, refinements and evolutions in how the character is drawn and the overall style surrounding the character. Frequently these changes are gradual as result of the artist honing their skill and shoring up what is perceived as the weaker elements of their art. In rare instances the changes are sudden and dramatic as an artist is inspired and floods their new favorite techniques and styles into their work. And sometimes as the artist gets too busy you may see things go in the opposite direction, as art and designs are simplified to allow them to be drawn more efficiently to turn out art on a schedule, and turn in things on time. (Perish the thought says I!) But regardless, these things don't happen in a vacuum, so where do these refinements come from? How do I refine my own style?

Well most of them come from looking at other people's work with a critical eye, breaking down what you enjoy about them and thinking about how to incorporate them into your own work. However, while one cannot help but be influenced by things they experience and appreciate, not everyone wants a direct line to the things that inspire them. Most artists want their own unique voice to come through in their work, not the voice of someone else. Most artists want to shine with their own unique little lights, not live in someone else's shadow. So how do you inspire yourself, then? It's next to impossible to shed the little particles of inspiration that will attach themselves to our own ideas, but you can still try and mold them more fully into your own thing.

When my comic was just beginning, back in 2002, a lot of the small ideas that became integral parts of the story came from things I like to call “jam pages”. The idea is very simple: take a sheet of paper, and fill it with as many small illustrations as possible. It's not about making great art, it's more like a single-player game of telephone. You let the previous drawing inspire you into the next. Even if you start with something unoriginal, by the time you get the page filled out, something of your own can be found in those final few drawings. Starting with a prompt or theme is helpful for those who can't find the inspiration, but I prefer to start by drawing a shape and proceed to mold a character in a stream-of-conscious sort of fashion. It's all about using your imagination and moving yourself out of your normal ruts. Try drawing characters in different outfits, giving off different impressions or doing things you haven't drawn before. It's best to start with a broad, high-level theme if one simply must, than to try to put too many restrictions on yourself.

Don't get caught up in making the art great, the jam page isn't really about practice and happy accidents can often be one of the benefits of “jamming”. That's what separates it from a “study”, where artists fill a page with one subject or a theme, like working on the anatomy of a hand or legs. The jam page is not in service of improving the art but rather the ideas. Avoid references or art that is currently influencing you and trying to draw what comes out of your own mind. Embracing mistakes and forming something new and interesting, new characters, or new ideas for existing characters.

I'll share a little personal example of the process as it worked for me!

Many of the reader favorites in my comic rose from the primordial ooze of a jam page. While their designs changed dramatically by the time they were introduced to the story, one character has remained rather close to his first illustration, Mannick. You can see him right up there in my old jam page at the start of this article! He was the only one on the jam page that got two illustrations, but they immediately said enough to me to inform what sort of character he would be and where I would ultimately take him in the story. The first illustration was more along the lines of some shark-toothed demon with a big X on his oversized shirt, his expression making him look a little unhinged. The second was him wearing a pair of goggles and rabbit ears, since the illustration of the faun to the side made me think “what about with a hat?”

While drawing, I suddenly recalled a Looney Tunes short where Bugs Bunny's personality changes with different hats, hence it being a rabbit's ears (which looks stupid with the goggles, I know!) I also remembered an episode of Batman: The Animated Series where the Mad Hatter uses hats to mind control victims into thinking they're in Wonderland. Recall what I said about it being nearly impossible to remove those small influences, but to try making it your own? They will come unbidden, but that's not always such a bad thing.

Aware of this, I began to alter things, and came up with a different approach to “gains mental powers from themed hats”. Things spiraled from there, questions I felt would need to be answered for a fully realized character such as: where the hats all come from, why there's a big X on his shirt, how one ends up with a hat-based superpower and how it works, and does it necessarily have to be always hats… much like the illustrations themselves, one idea begets the next idea. 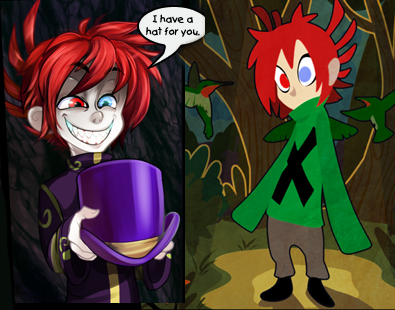 Where he is now, in case you were curious.

Mannick wasn't the first illustration on that page, but a result of where the whim took me after drawing a few random monsters and fairies, and he wasn't the only character I got from that jam page either. Not every idea that comes from a jam page is fit to use for your current project, but sometimes it can get your gears turning on something in your story that was holding you up. It's like an exercise for your art skills as well as your creative writing.

I don't do them as often anymore (I have enough characters already!) and I used different creative techniques for refining and developing, but I do still indulge in a jam page on occasion, usually for endeavors outside of my main comic such as Tabletop RPGs! Many a memorable NPC started from a jam!

Have you ever done a jam page, and did you find inspiration for your work there?

@Amelius, I'm talking to Alexey about that at the moment.

You can't overestimate jam pages. Back when I was a student this kind of focussed doodling was my main means of not falling asleep during exceedingly boring lectures (I have it on good authority that I can snore like a freight train - it was an authority on linguistics, and it was not an experience I'd like to repeat). It partly failed, because way too often I'd just stay in my seat afterwards to finish the pages I was filling, which apparently didn't sit too well with these selfsame authorities either. Some of my background characters came into being that way, but most of all it'd help me figure out the charater constellations for certain scenes in my comics, allowing me to try out all kinds of different viewpoints.

I wish replies were integrated into this section! Gunwallace, you got my reference!

Get everybody and the stuff together.

Wow! I used to sketch a lot like that back in the day. There wasn't any particular intent... it was when I was bored usually and felt like just exploring some vague ideas, poses and creations. And that led to some interesting things that I'd pluck out, take away and develop later :)

For some reason, this made me think of something from the commentary tract of Gravity Falls. The creator, Alex, sometimes drew little doodles and sketches of different characters either around the office or to pitch things at meetings. Admitting he's not an artist, he said they were all really ugly but some of the concepts ended up on the show. And the team loved his horrible drawing of a unicorn so much that they decided to use it basically as close to what he drew as possible for one scene. (It was a hilarious scene.)

Sounds like an interesting and fun exercise. I've never tried it. Not completely freeform anyway. (Sometimes I experiment with different character or outfit designs, but I have a distinct goal in mind.)

Cool article, and the "jam page" it's a great idea. Really, I enjoy looking back to my old arts and drawings and see them with a more critical eye. Sometimes you have a treasure chest ready to be opened.