Quackast 399 - How many characters is too many? 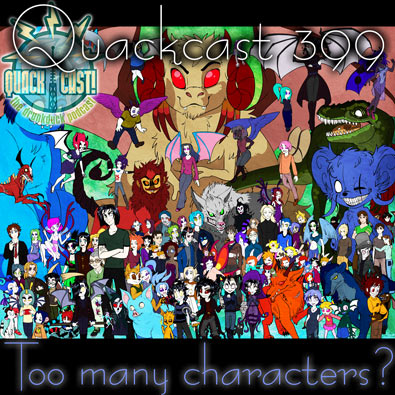 LISTEN on our new player!
Listen on Stitcher ​​- https://www.stitcher.com/s?fid=224306&refid=stpr
Or TuneinRadio - https://tunein.com/podcasts/Books–Literature/Drunkduck-Quackcast-p1150194/

How many characters is too many? Ensemble casts can be fun and the interaction between characters can be more interesting than the actual plot of a story! But keeping track of characters from the audience point of view or even from the creator's perspective can be hard when you have a lot. Characters can copy each other and just become bad clones or you can forget what some are meant to be doing and create plot holes, audiences can stop caring about some of them or just become really confused. So how do you keep track? I think breaking them into small groups can be one good way to do it… What are some others?

This week Gunwallace has given us the theme to Ray Gun: This one’s a slow burn, like the rise of a distant star over the cold, crater-pocked landscape of a desolate grey moon… This sound is as cool as the environment outside your spacesuit. Blast off and enjoy the view!

VIDEO exclusive!
Only for Patrons who donate $5 or more, here:
https://www.patreon.com/DrunkDuck

Cover pic by Amy from - https://www.theduckwebcomics.com/Charby_the_Vampirate/

Too many characters: Naruto. Dragon Ball Z. Any shounen that sells toys. X-men too. The Walking Dead. You can have many characters, since they have their own time to "shine", I think.

With Log Horizon- I loved that show and recently rewathed both seasons again. It really needs more episodes, it's so much cleverer and more original than things like One Piece and My Hero Academia :( But they're shojo so will always be more popular :(

How weird! :D Thanks for that.

@ozoneocean Ah ok, it's been a while since I've heard of Log Horizon tbh (trying to get back into Yugioh and currently starting Hero Academia myself) but I know how that can get with anime, with only One Piece coming to mind for me in terms of overabundance of ancillary characters. "PPG D" is a doujin (Japanese fancomic) by this artist named Bleedman which, much like the Simpsons, had its heydays after a decade in before it lost touch. I only recommend up til the Mandark arc. After that it's all loquacious garbled. XP

Oh anime is actually what I was thinking about when I came up with the topic, haha! There were a couple in particular: Log Horizon, which is great and splits the characters into groups but even so it just kept adding more and more and more to the cast and it was so easy to get lost. And Horizon in the Middle of Nowhere. That hits you with many characters all at the same time and you never recover. I suspect you have to read the anime to get it.

@Amelius It IS heartbreaking. Before the turn of the presidency, he made it ok for me to envision crossovers with my favorite characters in creative and inspired ways. *sigh* -.-

@JaymonRising: ohgods that thing is still going and people still follow it knowing what a pedo creep the author is?!(ಠ︿ಠ)

How many characters is too many? I'd say 135 in my opinion, seeing as some people still follow PPG D. -_-

It kinda depends on the length of the project too. There is a natural rate to characters appearing, getting acclimated into the plotline and becoming a part of the world. A story shouldn't START with two dozen characters. I think that's where a lot of anime suffer. Some series will be 12 episodes long and every episode introduces two new characters. Doesn't make for a good plot. Short, self-contained stories benefit from small casts. If you are writing, say, the Simpsons, you don't start with a hundred characters. Eventually, you find yourself there, but it's still feels natural and manageable (except to a new viewer who is bound to be a tiny bit overwhelmed).

Also, large ensemble casts are really something for a certain type of comic. If it's supposed to be a small world with small stakes, a small cast fits better. I've been asked how I keep track of everything with so many characters, and really for me it's super easy. I think about the story constantly, and re-read my archives to keep everything fresh besides. The plotlines of these characters are indelibly entwined together... no "new" character or resurfacing of a character who appeared in the background hasn't been a part of the story that's in my head/notes/concepts for years before I post the page. It's easy to know where you're going when you've already been there!

I think a cast of character is too many when certain characters contribute nothing to the story. I also never liked "monsters" or "characters" of the day. In my experience, less is more and even a character has left certain arcs, it's best to bring them back.

While I'm (obviously!) an advocate for large casts, I've seen it done incredibly poorly too. I'm not mean and so I'm never going to publicly drag a comic for it, but I have an example in mind (not on this site!) of one with too many characters that are taking up room and bogging down the story, and feel like they're simply there for set dressing. Too many fill the same role, and the writing is so sloppy I don't know who half of them are supposed to be. Characters don't always NEED a super-important role, but when they're more than passing strangers, they need to have an affect on the proceedings. Things should tie together at some point. Characters SHOULD have memorable designs that set them apart, but it should not feel like we're looking at your concept gallery instead of seeing real, breathing characters populating your world.

And I definitely agree that organizing them into groups is helpful. I did that with my character bios: http://www.curiousv.com/usedbooks/?page_id=41

I basically follow two rules for managing my cast and arcs. Rule 1: No redundancies. As species in nature, each character has a unique personality, social niche, and purpose. (I killed off some prototype baddies before recasting their niches.) Rule 2: All story arcs advance plot for one or more of the three central characters. (The first step of writing an "episode" for me is to define the goals. The world must be altered in some way with each arc or there's no point to it.) -- And now that I have a rough finale, I always keep that in sight. So arcs are moving toward an ending.

Tbh, I haven't actually figured out who my main protagonist is. I have a couple good leads. I consider my world and cast as a bit of a sandbox. I have a lot to work with. I have pruned out a few characters whose purpose was spent. A large cast gives that flexibility too.

And it just slips out of the control of the creator and I'm lost in a maze of subplots with minor players and I get bored as a creator because nothing is happening.

Too many characters and the protagonist gets lost in the sauce. You wonder just who is the story about and the story loses focus and it degenerates into a melange of short stories about the supporting cast. Lots of anime have gone this way and I wonder why I follow the thing. Then they conclude that and there's a recap episode because everyone forgot the original story. 😀

I love doing things with many characters. I guess it would have something to do with me growing up reading stories like X-Men and the Avengers. The chemistry is not only the getting through the story you are trying to tell but more of a journey as you play out the story. Each character brings their own baggage to your tale. Having a great understanding of each character helps in creating lots of subplots. Knowing that a teammate has issues with one or a few team members can show how helpful it would be for your tale. I love making action type comics with some major conflicts and drama to mold characters to change for the better or worse. It’s one of the reason love drawing Heroes Alliance. As a writer, knowing which major and minor characters will create interest for the story.