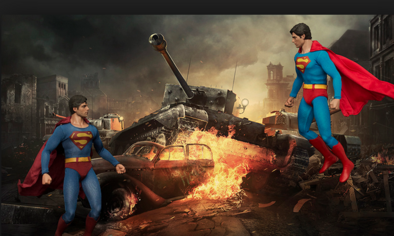 When Superman returned to the big screen ten years ago or so in “Superman Returns”, the movie was intended to be a direct sequel to the two original movies with Christopher Reeve. I was surprised at how mopey and depressing the movie felt.

Which is to say, the movie felt that way and Supes himself was kind of mopey and emo. I haven't seen it since the theater, but that was my strong impression. The thing was supposed to be a new and improved part-three that replaced the goofiness that took over the movies back in the day.

Thanks, but I'll take the Superman 3 with Richard Pryor and the Superman who turns into dark, selfish, lady-seducing, Tower-of-Pisa-straightening Supes in the end, before fixing it all when he returns to normal!

The newer Superman movies, which I've seen bits and pieces of, is even further away from the character's roots, with this flavor of a depressed Clark Kent who views saving the world as a burden and has themes of “not owing the world anything”, and is taught that protecting his secret identity, even at the cost of allowing someone close to him to die, is the most important thing.

It's a different take, but it never felt like Superman to me.

Another “white hat”, “goody-two-shoes” heroic character who suffered recently is Luke Skywalker. That's a different thing - I believe there was a purposeful agenda to make the character look bad. More great decisions from the Lucasfilm brain trust! But I digress.

In Superman's case, I thought it was an effort to make the White Hat Superman character ‘cooler’ or more modern, or to match some of the grit of the popular Batman movies. Or that filmmakers thought the classic Superman was too corny for modern audiences.

It may run deeper than that. Here are some fascinating Wisecrack Edition videos on the ‘new’ Superman and philosophy, and how changing Superman's original philosophical underpinnings messed things up:


In any case, the darker, edgier stuff has its place. Personally I think we've gone too far in that direction - it happened in the comics, and then in the movies.

I think that in modern times that feel complex and morally uncertain, the White Hat is needed more than ever. It's worked out well for Captain America, who has a pretty clear morality in the movies, even if he seems dorky to some of his friends.

After all, if everybody's an edgy rebel, then no one is!

Exactly that. I agree with everything you said (except the think about Luke Skywalker; I loved what they did with him… but that's another conversation for another time). Originally, Superman was the antidote to dark times. Now he's dark too? It was exactly Superman's "white hat" attitude that made him an interesting foil to Batman's "dark justice" in the comics. In both of the recent Superman movies—and Justice League to some extent—Superman is almost an anti-hero.

Funny! I watched Superman Returns just a couple nights ago, and everything you just said struck me like this!! I found myself agreeing with Lois Lane's article she wrote while he was gone: The World doesn't need Superman! He really emo and mopey, and honestly I never did love the uber-nerd Clark Kent they went for in these movies... And then, combining all this with the blatant Jesus analogies bugged me (flying up in the sky, listening to cries for help, like hearing prayers... when he fell to earth after shoving the krypto-continent into space, he took on the shape of being on a cross...). Of course, I'm one to talk - my character Kimber Lee can be quite the dark mopey one - but I'm gonna try to work on that!! :D But like Banes says, Dark, Emo, Edgy... they have their place!

(And autocorrect changed "grim characters" to "from characters." My phone's vocabulary sucks.)

Mood is really important, more than individual characters. It's kind of hard to define mood. It's a product of setting, story, and characters but also somehow exists independently of them. You can have from characters with an intense plot and dark world and somehow still have a light mood. (Like A Series of Unfortunate Events.) I don't know how to really explain it. I like light moods. Narration can make a mood lighter or sarcasm or pacing. The best stories (for me) manage to combine dark and light. The intense character in the light-hearted world or the unflappable optimist skipping through the apocalypse.

It feels like they think they shouldn't be for kids at all. No sir-ry these are adult comics and stories totally made for adults!!! And that means we must cram it all full of dark ADULT colors and serious ADULT dramas!!! Only kids want super heroes. Adults know it's all bleak and there are no heroes in the world!!! :rolleyes: DC can be pretty dumb. We want accurate depictions of our super heroes! Larger than life, fantastical. It would have made the team up of Batman and Superman that much cooler if they were not both brooding murderers!

Movies and comics do reflect the times, but some characters or universes just aren't cut out to swap their white hat even to a light grey one, say. You'll just get a clash of concepts that does nothing but make it all look inconsistent. The Star Trek franchise has struggled with that, too, ever since they tried to introduce some more darkness and edge in the 90s. They somewhat managed to save the day by introducing new, more fitting series concepts as well, but how much of it really worked out is debatable.

Movies reflect the times. People today are weary of "white hats" in real life, so they don't go over so well in movies either.

dpat- me too! That's a pic of figured based on the good superman vs the bad superman in the Superman 3 movie I mentioned!

Used books - I've liked the antihero type stories or characters here and there, and the deconstructions once in awhile. I think it's the imitators of the great stuff that ruined it. The badly written antihero or deconstruction is as bad or worse than the 'corny' heroes and stories. i like a good character who might stumble and fall for a bit in their worst moments but then get themselves back!

Seeing that pic, I wanted to read that comic. It suspect it might be better than any of the Superman movies.

I love super optimistic "good" characters that don't falter (for longer than one act anyway). The best ones of recent times are Steven Universe and Mabel from Gravity Falls. I am completely uninterested in the vast majority of live action TV (and movie) selections in recent times. The anti-hero, dark, brooding craze is not a fad I can get behind.

My mistake. It's a World Of Tanks background with two superman action figures superimposed and not well blended in.🙄

Where did you get that picture? Two modern action figures square off against a World War 2 background? 🤔 It's a Cromwell tank crushing a 1930s car!

I was running late - I'm rereading and this one's a bit all over the place. sorry 'bout that!