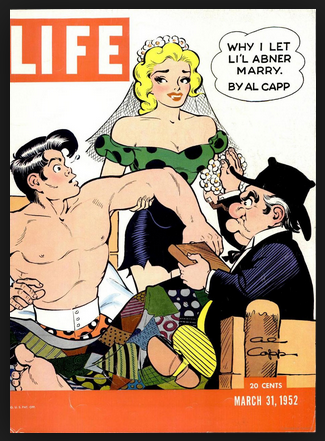 “Don't worry, Bart. It seems like every week something odd happens to the Simpsons. My advice is to ride it out, make an occasional smart-aleck quip, and by next week, we'll be back to where we started from, ready for another wacky adventure. ”


In most series fiction, the status quo rules. By the end of each episode, or occasionally the two-parter or mini-arc, things will return to the normal setup of the series. Even if there's been some upheaval, enough time will pass “offscreen” to allow a return to the basic setup.

This doesn't apply to ALL fiction, of course. Not even close. But the majority of longer-running series on TV or in mainstream comics will have a basically static situation.

It was a comedy strip about hillbillies starring the strong (and dumb-) as an ox Li'l Abner, and the beautiful Daisy Mae. For over twenty years she pursued him and he resisted her marital desires. But then the two married in 1952 (um…spoiler alert…?). I read somewhere that when someone commented that creator Al Capp had ruined the central tension of his strip, the fiery-tempered cartoonist blasted the critic viciously.

It's hard not to see the critic's point - although the strip ran for another 25 years, so I guess things went along fine!

A somewhat more recent changing of a series' status quo happened in Moonlighting, when the will they/won't they, firecracker-dialogue couple of Private Detectives got together in about season 3 (I think). The show went from a witty, back-and-forth snappy dialogue-heavy comedy action show to this maudlin, depressing thing as the characters spent many episodes on end sharing no scenes together and working out their complicated feelings for each other.

It might have been a realistic way to approach this kind of situation, but it derailed the show completely.

I've wandered off topic here - the point is that series will have a certain set of limitations on what it's about, what the characters are about, and what the essence of the series is. Even shows with rotating casts have this - The Walking Dead is about surviving and rebuilding the world, and fighting zombies and other groups of survivors.

The X-Men is about superpowered mutants who are heroic warriors who protect humanity but are also hated by humanity.

Sometimes, it's the CHARACTERS who people are tuning in to see. A complete change of circumstance can be a good thing - Archie had massive success with the zombie apocalypse series “Afterlife with Archie”.

Of course, web comics do not have this responsibility to maintain this kind of thing, and probably violate it often, since they're controlled by one or just a couple people. But if it goes too much off course in the wrong ways, readers can still end up confused and tuning out if they don't know what the series IS.

What do you think? Are there particular characters or circumstances that must be kept for your comic to still be your comic? Have you ever abandoned a series that lost its focus? Or have you stuck with them? What are the biggest changes you've seen a series pull?

Have a fine day, status-quo or no!

The Simpsons are special, because a) it works the same way there and b) the status quo could be added to and is extensive enough that the creators have enough leeway to make their ideas appear not too repetitive.

I think what really kills most series are network executives who just don't see that some shows can't run on forever - the more specific their setup the less. Just as JNP basically said: if parts of the connecting plot aren't resolved at some point, the whole thing becomes farcical. If that's not the case, some of the favourite characters will have to be written out sooner or later because actors are just human too, and they may get fed up with doing the same sort of thing for years. Your webcomic characters never get tired of their roles, unless you do, and that makes the difference. Moreover, you can just take a break and pick it up again, later. In my case I wanted my comic to be one that can be read out of sequence, which effectively rules out a developing plot and reguires a strong status quo. Nevertheless that doesn't mean that the status quo can't evolve, just as the comic evolves, provided it does so slowly enough. Unlike a TV show creator you've got the time for that.

I’d imagine that standalone, episodic thing is more rare in webcomics. Not sure but that’s my guess!

Unless it's a show that literally resets per episode I'm typically not too fond of keeping the status quo if it's the hook that it'd be broken. Will they/won't they gets on my nerves after a few seasons and so does certain "goals". Like a char spends the entire series trying to solve or fix something but it'll never happen as the whole existence of the series depends on it not happening. My status quo is intended to change often in my series for better or worse. Hopefully better!

@Abt Nihil - True! A lot of webcomics just don't work that way, and movies can't really do it (and it probably wouldn't work if they tried). I've been wondering if, whenever the X-Men are rebooted by Marvel, if they'll do it as a series on their streaming service. I kind of hope they do, so they can do the kinds of stories out of that consistent base that the comics were able to do.

@usedbooks - Yeah, that seems like it could collapse everything. Unless it's a fantasy or sci fi series that's got a "Multiverse" as its setting - or a series about one or two travellers where the characters are the only consistent thing to begin with.

@bravo - all true! I agree with everything you said. I've heard of the Thin Man and heard great things but I've never seen it.

I think a main challenge when making a webcomic is to reach the point where there's something you can call "a status quo" to begin with ;) In fact, I've recently been thinking about how there's all these superhero movies now, and even the most "serial" among them, i.e. the MCU, barely portrays something akin to a status quo. Of course, movies always have to be about upheaval, about that point where the status quo is changed... but I miss a movie which would just portray something like a superhero routine. Superman saving a cat out of a tree every day, that sort of thing. (Sorry, I digress.)

Btw, the one change that almost always kills a series seems to be a change of setting. I can't recall a time that it ever did anything but destroy a series.

It's always a risk to make a big relationship change, but it can be done well. It can improve a series. It can create new opportunities for plotlines. The risk is changing the mood or, if a series is built entirely on that one thing, it can crumble. It depends on how strong it is to start with. Marriage and babies didn't hurt Get Smart because the series plotlines didn't hinge on relationship tensions. It may have even improved because it added the domestic angle to the weird espionage dynamic. Healthy series grow with changes. But changes made as an attempt to revive a dying series usually only ruin it faster.

Al Capp had run out of stuff to do so to get it to move along Abner and Dasiy Mae got married. Besides right after the marriage came the Broadway Musical which was then a movie. The comic got better because of how crazy and kooky married life was in Dogpatch USA. Some of us are old enough to have read the comic in the funny papers as well as seen the movie. Beverly Hillbillies was inspired by Lil Abner. Oh the satire, oh the marvelous silliness that was Lil Abner. Sometimes things get better if you let the characters grow. I haven't seen the Simpsons in years because I think the series has stagnated. Some things move forward and get better. Like Farscape allowed relationships to grow and that made the series. moonlighting could have become a great couple show like The Thin Man if only they'd let it. But instead it got all angsty.