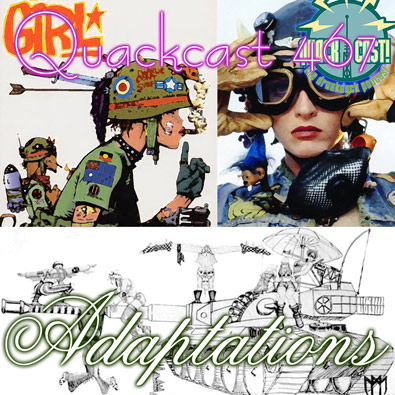 The process of adaptation is quite interesting. Stories go through all sorts of changes when they're transferred from one medium to another. A lot of the time we bemoan that as “not staying true to the original” or “the book was better”, but there are many times where the adaption is really interesting in its own right, even though it's quite different from what it started out as.

A straight out bad adaptation (in my opinion) is Peter Jackson's “the Hobbit”. Instead of simply transforming the story to better fit the medium of film, it was changed to accommodate current fashionable Hollywood tropes- an A, B, C, and D story structure, romantic interests, tragic heroic characters, nemesis characters, high speed action sequences etc. It didn't retain any of the spirit of the story it was based on. Retaining the “spirit” seems to be the important part of making a good adaptation, details don't matter so much.

In that vein, Conan the Barbarian is considered to be quite a good film. It's the only successful Conan adaption from the original stories apart from the comic series. For the movie they changed details about the character (supposed to have square-cut long black hair instead of ragged brown hair, supposed to be swarthy skinned, and his origin was changed massively). The story in the film was loosely based on a few different Conan stories, but mainly it was its own thing. The story of the film stayed true to the theme of Robert E Howard's philosophy and character even though the details were all wrong, this made it a very good adaptation because it's the theme of the stories and character that makes Conan so good, NOT the details. Later adaptations in the form of other films, games, and TV series never managed to get that same vibe.

In the Quackcast we cover things like War of the Worlds, Robin Hood, the Marvel Universe, DC movies and so on.

What are some good or bad adaptations that you've seen and why did they succeed or fail?

This week Gunwallace has given us the theme to TRUMPed, or rather the “making-off” the theme for TRUMPed. You can see what boundless taste and sense of style this fellow has in his choice of theme tunes, no Eleanor Rigby style classical sounding stuff for the blonde haired buffoon, Heavenly choirs and stately piano pieces are far too serious, subtle, stylish and sensible! Nothing less than a bubblegum jingle will please the Pres!

TANK GIRL yAY !!!!! THATS WHAT GOT ME INTO COMICS

I love the Princess Bride! I haven't read the book though. Your descriptions remind me of Twenty Thousand Leagues Under the Sea: The book gets bogged down at times over technical stuff... descriptions of undersea flora and fauna. It's interesting but it's a complete departure from the narrative. All adaptions avoid that XD

I have that TG book too :D

OMG! I love 'Tank Girl'! I think is a good adaptation, but heavily censored. BTW, @ozoneocean I have that very same Tank Girl 2 book you used for the image. :)

Since usedbooks brought it up, The Princess Bride is an interesting case (perhaps because William Goldman wrote both the book and the screenplay). The book is "the good parts version" of a fictional bigger book (by fictional author S. Morgenstern). Yes, the prologue explaining the reason for coming up with "the good parts version" is tedious and overly long, but the rest is hysterical. I read it for fun during college, and, as an English major, the explanations for the bits that were "cut" from the original text--especially with the literary analysis by a scholar--were spot on satire of the hoity-toity literary criticism I was reading a lot of (and rolling my eyes a lot at) at the time. The movie was a perfect translation of the "good bits" in the book, and knowing there were substantial bits the grandfather had to skip over gave all of Peter Falk's pauses and searching for where he left off a fun subtext for those who've read the book.

I think probably among the most adapted books is A Christmas Carol. Some are very enjoyable, some true to source, some deviate but are still likable, some weird, some awful, many choosing to lean toward a "heartfelt" tone, and others toward the "creepy." (It is a ghost story, after all.) It's such a short story with a firm but adaptable framework that it lends itself to adaptations.

Also, mini-series make for much better book adaptations than movies do. The Tenth Kingdom was excellent. The 1996 Gulliver's Travels miniseries with Ted Danson was probably the best version I have seen. The 2009 adaptation of the Color of Magic was very good. And the very recent adaptation of Good Omens was stellar -- not because it was true to the book but because it kept the story and also deviated from it in surprising but enjoyable ways. (Neil Gaiman was very much involved in the process as well.)

The Hobbit is obviously the worst. Among the best, in my opinion, is The Princess Bride. Not because it is a SPECTACULAR movie. It's a good movie (despite Buttercup being completely unbearable). It is however, MUCH better than the book. The book was okay, but it had glaring issues with pacing -- much like The Hobbit movie. Opening with many pages of exposition in run-on sentences, rambling descriptions of Humperdinck's underground zoo and the most tedious, technical, boring descriptions of swordfights I have ever encountered. The movie managed to be concise, clever, and well-put together. It captures the story pretty much in its entirety with all the tedium removed.