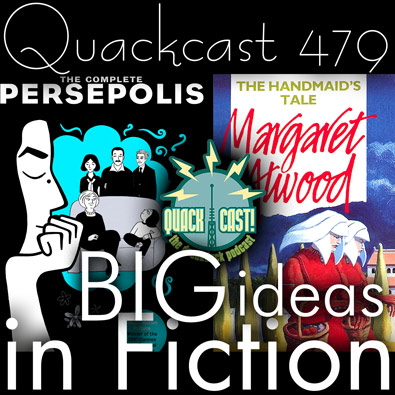 My original idea for this Quackcast was: “Genre fiction is the best place to explore ideas, straight fiction doesn't do it as well”
What I meant was that diverting from straight reality in fiction makes it easier to conceptualise, simplify and explain complicated ideas to a general audience for a whole number of reasons. There was some disagreement between Tantz and I because I expressed myself poorly so she'd thought that I was saying it was much easier to write SciFi and fantasy (Genre fiction), and it was easier to write about big ideas, while straight fiction wasn't good for that- Which is fair enough! My initial statement is so badly worded that's a valid interpretation!
Fortunately Banes and Pit were on hand to smooth things out and explain things properly. Pit mediated between us and Banes conceptualised my concept FAR, far better than I did! Unfortunately you don't get much of that disagreement on the Quackcast. You DO get a bit of it on the PATREON only video however ^_^

To get back to things though: Diverting from straight reality in fiction, whether that's into a full on genre style or just adding unrealistic elements, allows you to symbolically handle big ideas like death, mortality, racism, slavery, predestination, religion etc in a way where you can be very specific about what you want to say about those ideas, more so than in straight fiction because you have more control over the world you're presenting. That's not to say that all “genre” fiction tackles big ideas or is always good at doing it when it does, or that straight fiction doesn't tackle big ideas or does it badly when it tries to. “Genre” fiction also has the advantage of being able to separate its ideas from current realities of politics and culture which might get in the way of people being receptive to the ideas that it presents.

A Handmaid's Tale (Margaret Atwood), is a good example of this: The big idea presented in the book is that women's place in society, their rights and humanity, can so easily be wiped out overnight, the experience is dehumanising and horrible, and it can happen anywhere at any time. It uses a Scifi setting to do this, which makes the scenario seem very possible but also accessible to a mass audience. There have been numerous realistic and true stories written about the experience of women when Shah of Iran was overthrown in 1979, or when the Taliban took over in Afghanistan in the 90s, and yet none have had the reach or the general acceptance of A Handmaid's Tale.
The closest would be Persepolis (Marjane Satrapi), but in it's case it still employs diversions from reality in its style, and since it's specifically about Iran people are far less likely to apply those ideas more generally.

Early Star Trek and Twilight Zone episodes were goldmines for “Big Ideas”! What're some of your fave “genre” fiction that tackles big idea better than other kinds of fiction?

This week Gunwallace has given us the theme to Fated Feather: Come aboard me hearties! Cast off and sail away into the balmy tropical sunshine, as warm waters lap the hull, the bow wave glitters in the sunshine, the rigging creaks in the warm breeze, and seafoam floats by in our wake. Today is the time for adventure on the green seas.

I agree. Realistic fiction is often pretty stylised in its own way.

Even quiet, "normal" fiction can tackle bigger ideas through subtext. Hemingway did it a lot. "Big Two-Hearted River" is a prime example, where, on the surface, it just seems to be about a fishing trip, but if you dig beneath the surface, you can uncover a commentary on war and its effects on people. That said, genre fiction is probably the easiest way to write about "big" ideas, since a lot of sci-fi is plotted around the idea of a "high concept" instead of around its characters or being bound by a sense of realism. (Of course, whether "realistic" fiction is truly more realistic than more fantastic fiction could be a subject unto itself.)