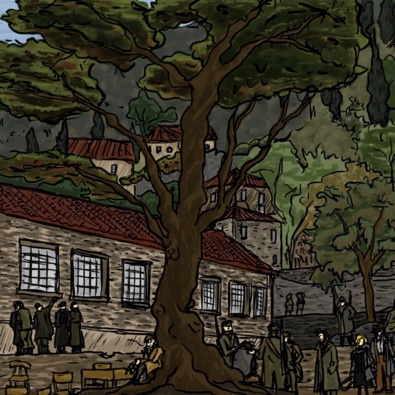 MILESTONE: Without Moonlight by Tantz Aerine

In a similar fashion, Tantz Aerine’s comic, Brave Resistance, which she co-creates with Pit Face in a collaborative comic also formed as a creative, collaborative brainchild on The Duck ten years ago in 2010.

In 1942 Nazi-Occupied Athens, Fotis and his gang of fellow war-stricken friends risk their lives to earn their daily meal,hoping to scrape by until the war ends, if it ends. But when a British agent vital to the success of a mysterious plan by the newly formed Greek Resistance against the Nazis goes missing, the children's routine is forever disrupted. Suddenly, Fotis and his friends will have to tell friend from foe and traitor from patriot in time, or the Greek Resistance will be crushed before it even makes its stance.

MILESTONE: The KAMics by KAM

Last Sunday night, KAM was uploading comics for the upcoming week when KAM realized that Wednesday, October 21, was going to be the 1,950th page for The KAMics.

KAM stated, “1950… makes me feel like putting on a leather jacket and riding a motorcycle down to the drive-in. ;-)”.

Congrats to you both!

Thank you so much!!

Congratulations on these impressive milestones to both of you!

Congratulations to both of you! Your dedication is admirable and inspiring ^_^

Congrats to you both.