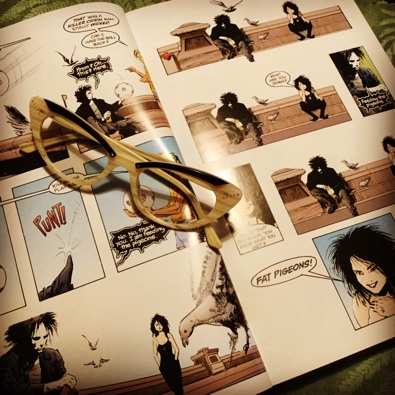 It is hard to predict when new content for television shows and the big screen will start rolling out. I jokingly once thought that we might all turn back the clocks and bring back old fashion radio shows where candy wrappers were used to imitate crackling fires and beans in paper towel tubes would be used for rain.

Which is why it came as a welcome surprise when Neil Gaiman made an announcement back in July 2020 that his graphic novel series, The Sandman, had been recorded and was going to be released on Audible at the end of the month. This was big news as there had never been a movie, TV Series, or even cartoon series made after the Sandman (although there has been a lot of talk and speculation on which actors would be cast). The voice actor cast was released with heavy-hitter, James McAvoy, cast as the main character Morpheus (aka Dream). I had only read the Sandman graphic novels after borrowing them from the library, so I do not have copies of the physical books on-hand. However, I was still very excited to revisit them in audiobook form.

How does a graphic novel transition into an audiobook?

This was the first question I had as a graphic novel was a purely visual masterpiece. On the other hand, an audiobook is completely void of anything visual. The workaround is that a Narrator took place of the visual aids in that fleshed out descriptions of each page were made as the original character lines were recited. Listening to a graphic novel is a way to strengthen imagination muscle, it forced me to create images in my head without having another artist’s interpretation to base visuals from. It also included backgrounded noises and sounds (such as the sound of a squeaky door slamming shut) that were unavailable in the original version.

The best part about having an audiobook created from a graphic novel is that there is no arguing over the source material or how accurately the work was translated from the original. Audiobooks adapted from graphic novels can work as long as time is spent preparing Narrator cues, the voice actors are invested in the source material, and time and attention goes into having extra background sounds woven into the dialogue.

-no longer than 5 minutes in length
-email the sound file to me at kawaiidaigakusei(at)gmail(dot)com
-Due no later than Wednesday, September 30th

@hushicho- I am curious to know whIch writers you find inspirational or considered to be exceptionally talented. I am always looking to expand my library of quality books, especially graphic novels, @ozoneocean- Thank you!

It seems like a potentially interesting idea, but you lose a fundamental aspect of sequential art by turning it into an audio book. Couple that with how much I despise Gaiman and his writing, especially Sandman, and this just seems like a terrible idea to me. It works for the written word, especially for the sight-impaired or the blind, but as far as comics go...no, I don't think so. The medium is a holistic whole that incorporates various visual elements intrinsic to it. It might be fun as a bonus to augment a comic, but I think this is a misguided attempt. Use your imagination and do your part in the creative process, meet the creator halfway. Otherwise it just becomes someone shouting into the void and someone else being shouted at.

Translating between media is always a challenge. I picked up MotionArtist several years ago with the idea of creating an audio/visual version of a graphic novel. It would basically be the audio book using MotionArtist to guide the reader's view across the page. Turned out to be a much bigger project than it initially appeared.

Sounds like a great idea! Like when we did Audio versions of people's comic pages on the Quackcast!

Very interesting! Yeah, the narration would be a big job for sure. But if that part is done well, it lets the audience to imagine the ultimate movie. McAvoy is a great choice for Morpheus, too.