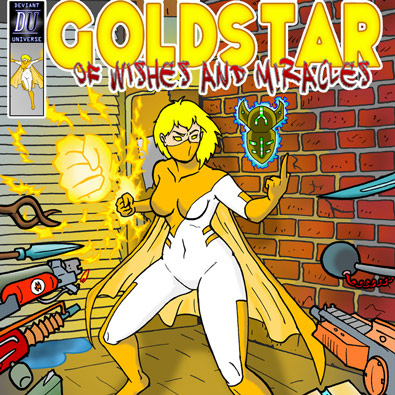 Emily Thompson is a college student, but also a super hero with incredible powers! We get to see what she can do in the awesome prologue to “Goldstar Of Wishes and Miracles” as she competes in a battle royal for her very life on a strange alien planet against a bizarre selection of super powered beings like herself. It's pretty exciting stuff! Goldstar is an interesting character, very forthright and straightforward, which is a nice way of saying she swears as often and creatively as Cheryl and Pam from Archer combined… The whole project is part of the DU or Deviant Universe. It's a little like the Marvel universe but made up from characters created by artists in a Deviant Art community. The prologue story comes from an event from the DU and the characters Goldstar fights are from other artists who contribute to the DU.
This is a superhero comic with SciFi, drama and quite a bit of comedy. All full colour digital art.

Read - Goldstar Of Wishes and Miracles, by TheViktor, rated T.

@PostProoduct - that is very interesting! I was always curious what LG came from.

@TheViktor- Glad to be able to feature Goldstar!

Whooo! I am so happy and honored! Didn't expect this to happen today!

Fun fact: "GoldStar" company later changed its name to "LG". Heo Sung-tae was responsible for TV sales in the Russian market and has a nickname "Gold Star King". Later he become an actor and played villain Jang Deok-su in "Said Game" series. Why I posted it here? Have no idea (´• ω •`)