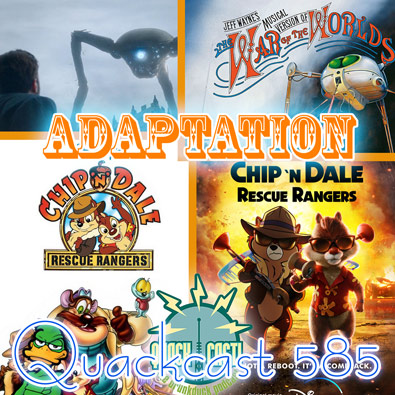 Adaptations of one thing into another is an interesting process. What's lost, what's gained, what modifications do you have to do to make it happen? As webcomicers we do it all the time in many ways, we have to adapt our influences into ideas, adapt those to stories, and adapt those to images and comics, which isn't trivial! It's often quite difficult to transform the written word into narrative sequential art- what portion of the writing gets directly turned into images, what's cut, and what becomes dialogue? For me about 20% is cut, 78% becomes art and 2% becomes dialogue or captions.

We chat about film and story adaptations as well of course, War of the Worlds (HG Wells) in particular, since it's become several different movies, artwork, video games, a radio play, and a really excellent prog-rock concept album among other things. All those adaptations take different approaches, Orson Wells' radio play version updated it from the late 19th century Britain to his present day and location and framed it as a developing news story, making clever use of the medium it was playing on. Most cinematic versions have followed Orson's style, but the concept album by Jeff Wayne stuck with the original historical setting which made the story much more interesting, tragic and compelling.

Another more current and different take on adaptations is the “Chip ‘n Dale: Rescue Rangers” movie. This is a live action and CG animated hybrid film version of the 1990s Disney adventure cartoon series which featured a crime fighting rodent team. The usual approach to those adaptations is to simply update the origin story, stating from 0 and set it in the present day using current animation technology to make the characters look as real as possible, the original media is treated as lore and inspiration but is not cannon to toe movie. This movie however took the opposite approach: the original cartoon is treated as a real TV show that the characters (who are shown as actors), stared in, and this movie shows their lives 30 years later. The animation is a mixture of 3d CGI and pseudo 2D cell animation, plus pseudo stop motion claymation and the film is largely used to parody and spoof animated adaptations in general, so it’s perfect for this topic!

So what are you fave adaptations? Where dp they go wrong or right? And how do you go about the process with your own work?

This week Gunwallace has given us a theme to Amie Armageddon. Hard to describe this one, it sounds like a great pop-song you’d hear on the radio or as the theme song to a big budget movie. Echoing tonal vocals, evocative, layered, sounds… It sets a scene and then expands upon it. Just a really lovely piece of electronica.

@Ozoneocean - I've got a wild fun fact for you. The TV show actually uses "Bright Eyes" as its opening theme! XD The brightly colored, kid-friendly, Saturday morning cartoon version made the decision to use a WILDLY tonally different song to open the show. It's part of what makes the TV show so fascinating to me, the people who made it are clearly fans, they love Watership Down and wanted to make a more accessible adaptation (to varying success XD) but a lot of the material doesn't fit. Like...guys...it's "Bright Eyes", you DO know what that song is about, don't you? Haha!

@Usedbooks - Yes, Sherlock in he books is a bit of a dick. He's a late 19th century intellectual superman, based on ideas and a context that really doesn't exist anymore so to do a real faithful version you have to do a lot more groundwork to establish that context first and then build the character and relationships. I like all the adaptations of him too.

@Usedbooks- I'm meaning to watch the Branagh version of Murder on the Orient Express, though just from a the images the strangest deviation is his silly facial hair! It's bizarre considering the character is described as having a small little strict piece of facial hair and that's massively emblematic of his personality, being extremely precise, OCD, and precious about tiny subtle details to the inth degree, rather than a preening popinjay peacock of a fop. He's about subtlety and care rather than showing off. But I will give it it a go XD

@Dragonsong- yes, everything is derivative XD

@Dragonsong I've only seen the first animated version and it made me too sad to want to watch it again or try another version. Haha, even the theme song (which is another sort of an adaptation) makes me soooo sad, though I do love it. Damn, even THINKING about the song makes me sad ;_;

...but to the second part of the question and how it relates to my own work: Everything I've ever written is in some way based on something else. Usually it's unrecognizable by the time it gets posted here, so it's hard to claim it's "inspired by" but in a strange way all my stories are adaptations. It's not hard to see how my first comic, Firefly Cross, was basically just a Gargoyles fanfic. Conscripted was inspired by something (a cartoon or a game, can't remember) where people were getting turned into monsters that the heroes had to save and I thought "wouldn't it be more interesting to follow the people who turned into monsters?" I think most stories are like that - born from a grain of something else, but grow up into their own unique thing. Adaptation is an art form in and of itself. It's fascinating to see what each person who views a work takes away as the important parts.

I love the book Watership Down and I love that there are multiple animated adaptions of it because it kind of shows how differently the same story can be told. The original 1978 is a classic. It's pretty faithful to the book and when it isn't you can see pretty clearly why that decision was made (Almost universally to condense the story and save time). The newest adaptation by Netflix is a fascinating mixed bag. While some of their changes had me scratching my head (why would you change Woundwort's final line when it was already perfect?) others I just adored (a re-imagining of Hyzenthlay as a bitter, grizzled war vet was something I never knew I needed.) The third adaptation is an animated series. Objectively the worst of the three, but my favorite one to think about because of all the changes they had to make - some of which I actually ended up liking - which really make it its own thing. (I'd go on, but character limit. I like talking about this though, haha.)

Also, in terms of new better than old... Little Shop of Horrors and The Producers. I just can't enjoy the older versions. I really tried.

Oh, I just remembered another one! The 2017 Murder on the Orient Express was beautiful! Tbh, I loved it so much more than the version with David Suchet. (Suchet is brilliant, and many of his other works as Poirot are excellent, but that one didn't strike a chord with me.) I know it had mixed reviews, but I quite enjoyed it. I think adaptations have a hard time when one version becomes a "classic," and the new one goes in a different direction.

@oz: And that's very true. A work should be its own. A good one is good regardless of whether it's an adaptation or how faithful to source it is.

@oz: Most of the original stories are either boring or weird (or completely implausible in light of what we now know scientifically). Holmes himself is a weird character. When he's depicted like the stories, the audience thinks that's the deviation. XD I am fond of the old b&w Holmes series but they get the character very "wrong" if they were going for story fidelity. I do like a try for accuracy too. I think Elementary captured Holmes really well, despite being modern. Sherlock was okay but that version of Moriarty was annoying and not intimidating nor had any sense of the original, so I tuned out. In any case, Sherlock Holmes adaptations are a unique/groundbreaking way of storytelling because Holmes is an entirely unrelatable protagonist, and Watson as narrator is the one audiences relate to. I think that's what I enjoy and what makes them stand out, regardless of what their gimmick is.

@Usedbooks - I like Sherlock adaptations too but I disagree that twists on the original material are better- only when the original is so well known that a strict retelling would just be uninteresting. In general any kind of adaptation method can be good if it's done well. I loved Scroodged too ^_^

I enjoy Sherlock Holmes adaptations. Twists are better than strict adherence to the source imo. Same with A Christmas Carol. I've enjoyed many versions of it. The one with Patrick Stewart was the closest to source. But Scrooged, Muppets Christmas Carol, and the musical version with Kelsey Grammer were extra fun.