Introductions: A Wall of Text! 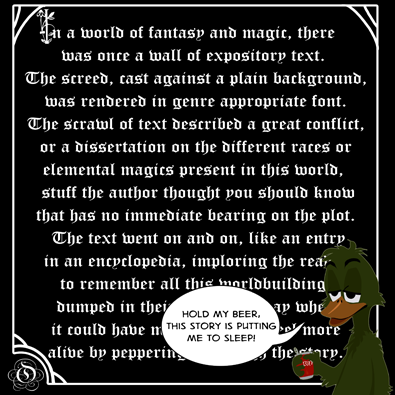 Hello everyone, I'm your new article writer here on DD, Amy! And while we are on the topic OF introductions, what finer time would there be to discuss that very thing than in this very inaugural article? No better time, says I!

Introductions are hard. It's the first impression we make on a prospective reader that makes or breaks our chance to keep their interest. As an avid reader of webcomics, I'm always searching for more to add to my reading list as a depressing number of my favorites eventually go on indefinite hiatus.
So as you can imagine, I've seen a lot of intros. I've also seen a lot of intros that dumped cold water right on my enthusiasm, because they opened with the worst possible thing: EXPOSITION DUMP TEXT WALL WITH NO ART.

When I crack open a novel, I expect to see paragraphs of text. When I open a comic book, or a webcomic in this case, I expect to see a story being told primarily through visual sequences. In neither case to I expect to learn everything about the story-plot in the first page!

“But Star Wars opens with a text crawl! It's iconic!”

Iconic or not, unless your comic is a parody of Star Wars, there are some things that do not translate.
Why the text crawl works in Star Wars is that is NOT, in fact, what the movie opens with. The movie opens with the title, punctuated by a blast of orchestral sting. And as the text scrolls, that same orchestra is ramping up the viewer's emotions. Even when I was a child and couldn't read that text I knew some serious stuff was about to happen, and it kept my interest long enough to see what that was. Once the music has set the emotional tone and ramped up the viewer the scroll fades and we move quickly into a desperate chase, a rebel last stand, the emergence of a dark wizard, the escape of the MacGuffin and the capture of a princess. In a few moments the whole stage has been set, the viewer engaged and we've been given a promise: The Princess is going to be rescued, the wizard confronted and the doomsday device dealt with. Before it rolls out, the setup has told us what exciting things we have to look forward to. Only then, riding the emotional high and exciting setup, do we slow down to introduce our protagonist going through the motions of his mundane and normal dull life.

In contrast, imagine your text being read in dull monotone over complete silence. There is no music to indicate what we should be feeling while reading your opening screed. No voice-over to add inflection or emotion. No art to give us an idea of what world this is taking place in– just words essentially without any context. We don't know your world yet, your characters, what's at stake so we have no idea what tone those words should strike, how we the reader should feel about them most of the time!
Star Wars' opening crawl reads a lot like the plot synopsis people post for their comics. Therefore, your comic description is your opening text! Have faith in your audience to be able to pick up context clues from your narrative and art to figure out “We are in a world different from our own!” or that the comic you described contains exactly what's on the tin.

“Show don't tell” is a mantra you'll hear repeated as good advice to follow. There's always a time for telling, even exposition, but not right when your reader steps in the door. You want to give the absolute minimum setup you can get away with before you engage them. It is like when your friend breaks out a board game and tells you, “It will only take me an hour or two to explain the game”. Get the reader hooked by opening with the most interesting thing you can. A history lesson about a world we don't care about at all yet is not that interesting hook. If your comic can't be understood without a wall of text explaining everything, then you need to change your approach to comics and storycraft. Usually in a pitch meeting you get one sentence to interest someone enough to say “Tell me more” and readers all too often are the same way.

Every story is different, but often the best opening is to establish your presence and try to get an emotional response from your reader. Let people know what you are about, and try and move them as close as you can to the edge of their seat by the time you've finished your intro (typically about 20 pages because that is the most a “sampler” will read before making a judgement call). If someone checked this comic out because of your premise, then start with that premise. If you're trying to slow burn to that premise or surprise your reader, then leave it out of your description– your audience has arrived with an expectation and will be frustrated if they have to wait dozens of pages for that to be evident. It feels like a betrayal when you check out a comic because of something in the description and 50 pages in we still haven't seen that thing you mentioned!

If your comic started with a wall of text, that doesn't mean your comic as a whole is BAD! Not every criticism is a condemnation and a misstep does not necessarily ruin the comic. However, every webcomic I've read that starts off this way would not be hurt in the least by deleting their text-wall intro, and that says something doesn't it? Let your new reader savor the first moments of discovering your world by inviting them to experience it through your character's perspective. The history lesson can come later.

Whew this was a tough intro for me, how about you? Did you find introductions difficult in your work or was it a total breeze?

Are you more forgiving of the text wall introduction, and have you seen ways that it was done well? There's an exception to every rule, so you are welcome to share!

I skip wall of text introductions and come back later, even if it's Frank Miller or Alan Moore (two good, but wordy writers...).

I did that once, because I thought it a great way to get going with the pages I wanted to draw without having to bother with stuff I didn't want to draw right now. I wouldn't say it was the worst mistake of my life, but it's certainly on the top half of my list of things I won't do again, ever. That's especially because my plan at the time was just to use it as a temporary placeholder to be replaced by a proper drawn introduction later, with most of its contents more like hinted at in the background rather than explicitly mentioned. That was nine years ago, it's still there. :/ Great article, Amy! Looking forward to reading your contributions. :)

I am fortunate to have a merciless editor in my wife who is constantly making me remove any unnecessary exposition. The original Dragons In Civilized Lands draft had a 20 page introduction to the lands, their inhabitants, maps and history. THEN the comic book starts.

A text scrawl as in Star Wars is like the old introduction to a Flash Gordon serial. It sets the stage. It is similar to the old storyteller strumming the lyre and singing "once upon a time..." or "in those days..." but the wall of text is like the begets at the beginning of one of the gospels. A tiresome mythical genealogy to tie someone present into the story through an ancestor. In this day and age unnecessary window dressing. None of us have a noble patron we have to establish a genealogical link to the story to get a bigger paycheck. We are only feeding our own egos as worldbuilers by spouting our mythological nonsense before telling the reader what he needs to care about. Any story with a wall of text inevitably isn't about that wall of text. The wall only sets up what is to happen. So set the stage as quickly as you can and exit to let the action come down to center. Let the words of introduction go up, camera pans down and ACTION!!

A great introductory wall of text to read Amy! Looking forward to more!

Just enough to set the stage. I mean throwing up a phrase or where and when is more than enough. Walls of text are books not comics. But even then it's good to start with an event rather an expository page of historical minutiae.

I think the Star Wars cral was originally supposed to be fake exposition, in that it sort of sets things up but it was really just a homage to classic 1930s SciFi space opera serials that referenced previous episodes. (going Full Bravo here). Later a lot of movies copied the text dump but without the homage part... Especially in fantasy and SciFi. Conan the Barbarian did it pretty well in that they have Mako narrating, and it's so cool just because of his voice, it gives the effect of an ancient story teller letting you know about a classic tale.

Hahaha, with no actual intro of Amy herself ^_^ A lady on DD that needs no introduction ;)

I do regret a bit where I started my story, but nothing to be done for it now. I feel as though a bit of world building dialogue could have been useful but I didn't want cause it felt to generic.

Great article! I look forward to reading more from you. And books suffer from this too. The exposition dump. The Princess Bride is one of the worst offenders I've read. My favorite intro of any story in any medium is the "cold open." Most espionage stories seem to start with the conclusion of a previous mission. It's a great way to jump into what the scope of the protagonist's career is. (On the other hand, I am NOT a fan of stories that start with the middle/end scene and then flash back to "it all started when." It's so tropey and kinda mucks up the surprise and suspense.)

Welcome to this new stage! I'm one of those who thinks that is better to put a lot of drawings over a lot of text. I mean, we do comics... not books. Great article :)

I never read any text walls… I just skip themXD

Excellent article, and welcome! I struggled with the intro exposition thing early on. It was before the great Undulation that shook the planet 5,000 years ago, when the Nine great Kingdoms were - er- there it goes again! But yes, the story has to start with something being shown, not told. Some kind of conflict that usually also establishes the tone of the story ahead. It's tempting to want to establish the history that's so cool in the writer's mind - but resist that temptation!

WELCOME TO THE ARTICLE WRITER'S CRYPT. YOU CAN NEVER ESCAPE. AWESOME ARTICLE TOO.