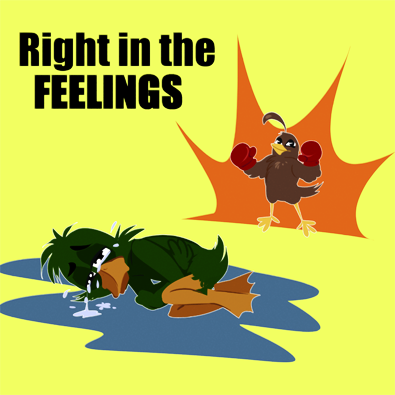 Have you ever read something and it gave you the “feels?” Something that was so intense that you couldn't help but feel the emotional truth of a fictional moment in time? In many ways that is the highest form of our art, and possibly any art; to communicate an experience and make it real to another person with nothing more than our craft. So naturally a lot of us aspire to give those feels out, quickly and frequently. And often this ends in cheap feels, narm and cliche melodrama rather than the emotional catharsis it aims for.

What I frequently see to generate cheep feels is a writing technique called emotional shorthand. The writers skipping right past all that pesky “character development” or “investment in the character's relationships” and going directly to the payoff, trying to manipulate us by drawing on experiences we either share or are socially conditioned to. For example, having something bad suddenly happen to a blind orphaned girl, it is so sad right?

Building emotional resonance, as opposed to emotional shorthand, does not mean you need to devote hundreds of pages to something before you can complete an emotional journey. Done well, a full emotional journey can be built and payed off in short order. One of the most often cited effective emotional gut-punches is the opening to the Pixar film “Up”, where we see the children we are introduced to in the beginning grow up together, and the troubles and triumphs of their life up until one is left alone. Contrast this with the opening to Guardians of the Galaxy where our protagonist's mother is dying of cancer, we don't know him and we don't know his mother so we have the shorthand of “it is sad when a relative dies” to associate with what is happening, and sympathize with the protagonist– but unless we have had our own recent departure we probably aren't as emotionally wracked as he is. Both of these deal with a death of a loved one, but the way Up frames it is very different from GOTG– because they want different things. GOTG doesn't want you to be feeling sad, only for you to understand space rogue Peter is because he lost his mommy, indeed they undercut this immediately with Peter being abducted and shifting our feelings to wonder. We don't really know his mom or Star Lord at this point, we understand it is a sad situation, but we don't really feel the same sort of sadness as the characters. This is emotional shorthand used effectively, we learn how this emotional event affected Star Lord which is important to his journey. For the audience though, this is only the emotional starting point, the pay off being the reveal of the second mix tap after spending over an hour with Star Lord. So when he opens that package we've journeyed from this starting point to arrive at the same destination when he sees the gift his long dead mother left him, this is the actual emotional payoff. UP by contrast wants you to feel the character's sadness and keep it in mind as we explore the story of the old lonely curmudgeon.

The key is everything should come at the right time and at the right pace, and you need to consider the emotional parts of your comic as much as you consider the other plot points. What are your character's relationships to each other? When two characters barely interact and suddenly they are deeply in love, it breaks your reader's suspension of disbelief because we the audience don't feel it even though narrative acts like we should. You have to work toward that goal, maybe by dropping hints and having characters interact more before you rush them into a relationship– or if the rushing is the point there should be consequences.

I like to call badly executed shorthand “Hallmark writing” because Hallmark cards are built around quick one-two emotional punches. We show an image like say a mother shielding her child from the rain and then get a pay off like “thanks mom for helping me weather the storms in my life”. Awwwwww! The card works because it exploits our pre-existing emotions. The card has not really created an emotional journey so much as parasitically piggy backed off our existing emotions. For a greeting card, that is about all it can usually manage, but with a comic we can and should do better. When used correctly, emotional shorthand can be effective, and emotional shorthand should be used to tell us how the character feels, a sort of emotional floor for us to build on. However, when trying to deliver an emotional journey, when trying to communicate something with your medium, when trying to be more than a Hallmark card, you need to do more. You need to take us on an emotional journey.

And like all journeys, it takes as long as it takes.

That was deep! I went on an emotional journey ^_^

Preach it! Emotion is probably the most important aspect of the plot for me, and I really hope I pull it off well