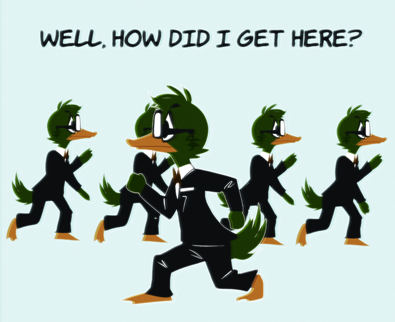 I read webcomics backwards, and maybe you should too. You might be aghast about spoilers, but trust me– almost every reader who happens upon your comic does this too.

I should specify–I don't read the entire archive backwards. It depends on the comic but typically I read back about 10 pages or so. When I'm checking out a prospective add to my favorites list, especially something with a large and established archive, I'm more interested in where things have gone than where they start off. As I said in my introductory article, beginnings can be rough and sometimes being sent to the first page of a comic's archive isn't going to be the best place to start, since one can't help but to improve their craft. Sadly, sometimes out first pages don't make a great first impression and do a poor job of showing who we are now. I recall picking up a volume of The Goon and reading the introduction from the author, it's more or less gently disowning the volume as not really representing the comic overall as it has evolved so far away from its original run. It's one of those series I know gets better, but !Woof! The author was not kidding! I can only speak personally, but I would much rather someone see my most recent work and become interested enough to see how it got to that point than have them see my first pages from 2004 as the introduction to my story, and decide that it's not going to be worth the effort to slog through years of rough artwork. I was so concerned about this when re-uploading my archive in 2006, that I had made new pages to start my archive off before getting around to reposting the old stuff.

When I click on a comic I've never read that has the first page of the archive as the default landing, I click to that most recent page anyway, heedless of spoilers. Authors may protest, “that's not how my work is meant to be consumed! Please read things in order!” But here's the thing, spoilers are not an inherently bad thing. Just about every trailer, teaser, preview and add ever put out has been a spoiler and people eat them up. I may land on a big fat reveal first thing's first, but if it is effective enough, it should grab my interest immediately and have me asking “How did we end up here?” It's a valid experience, as much as the “Where are we going?” and “Who are these people?”. When I arrive and the story is proceeding in-res, I am seeing how you use the tools at your disposal instead of seeing you set out pieces and read the directions.

To be frank a lot of media, even good media, have boring starts. I recall having to plead with people to keep reading A Game of Thrones the first few chapters. A lot of comics I now enjoy, I would have never made it past the opening if I hadn't sampled some of their recent work first to invest me in the comic and make me want to see where all this setup was going. When I skip right past all the fluff, prologue cliches, character introductions and slow buildup and see what characters are actually going to be doing, it retroactively paints a better impression of all that rough pre-game setup. I will look at these things more favorably if the character I saw on page 157 that is so cool I want to draw fan art is rather underwritten and lacking character development for the first 10 or so pages of the archive. Perhaps by page 80 or so, said character has improved and the series has “Grown the Beard” as TV Tropes puts it. So 10 pages from the current place in the story is going to be a better representative of the positive parts of the story than the first half of the comic!

So next time you are thinking of trying out a new comic, instead of clicking “start” instead click that back button a few times and just soak in the atmosphere and flavor of a mature comic before you decide if you want to commit to the whole enterprise. You might be doing yourself and the comic a disservice otherwise. And if you still thinks this sounds a bit crazy remember, Star Wars started on Episode 4 and after all this time that still remains the best place to start that series off.

Spoilers do not ruin a good work. If they did we'd never rewatch a film or TV series that we'd already seen. They still bug me though. xO

I’ve never really cared about spoilers. And I’m so encouraged to hear that people do this because my first pages were terrible but my latest ones have improved so much, or so I’ve been told. I don’t want people to see the first pages and not give it a chance. I should try doing this more myself...

Excellent article! I have applied this "technique" before (here on DD mostly because normally when you open a comic it directs you to the last update) and it works fine for me.

This is the way I fall into reading webcomics, too, and this post makes a lot of sense as to why it might be a good way to go about it! It's the odd way that webcomics are posted that make this a natural approach for readers. I try and remember that each page could be someone's first and I regularly make some kind of small setup/payoff work on the individual page. It's not always possible or desirable to do that, but can be something to think about.

My granddad was a fan of Agatha Christie. He always read the last page first. Studies show that spoilers don't hurt enjoyment and can actually enhance it. Although I'm not a last-page-first person, I almost always enjoy a book or movie more on the second read/viewing.