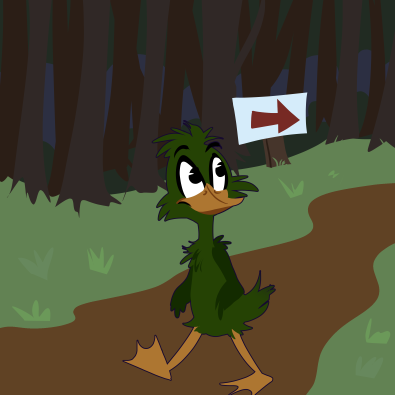 Last time we discussed how many new readers may read your work backwards on the first visit, and today I'm going to expand on that a little more. There's more to say on this? Well of course, because reading your own comic backwards also is a useful creative exercise! It's a decent way to catch continuity errors in your work, and to make sure the setup/payoff is being executed correctly. If things are being properly established, reading a comic the opposite direction should still make sense. A lot of webcomic authors find themselves stuck in a rut and unsure where to go, a common refrain of “I don't know where I'm going with this” before quitting. While JJ Abrams has proven that you can go far in TV and Movies being able to fake having some sense of direction, it rarely ends well for web comics.

If you don't know where you are going, a good way to get your bearings is to look at where you have been. Looking back through your work in the opposite direction is a way of looking at your own story from a different perspective, and it helps you look at it from the eyes of a reader and not just a creator. Even the most self-critical of us can miss our biggest flaws in the first pass. I think of this as the reader version of flipping the canvas– what looked great one way reveals our flaws from the other side!

I've read (and rather recently!) some comics where every page felt like it ended in the middle of a conversation, and expecting that conversation to continue on the next page was a lost cause. It felt like the authors had become impatient with the rate at which information was being revealed, and forgot what they were doing in a mad dash to get that exposition flowing. I read backwards and forward and still was scratching my head over what was supposed to be happening. Things that should have gotten reactions from other characters, conversations that should have logically been happening following rather interesting events, were treated as though they had not happened as we are carried well past the time where these conversations should have happened.

Typically in an ongoing narrative webcomic, your final panels need to “lead in” to the next page, even if it is a joke ending. When it does not, the reader is left to assume that time has passed between pages. Not all comics show a visible passing of time between pages with narrative tags like “Days Later” or “Meanwhile” or some of the gradient fades/broken blocks that I have seen some comics employ to show that a sequence is taking place much later from where we left off in a sort of fast-forward or scene transition. Star wipe to next scene! A major contributor to continuity problems is indeed having to reconcile the page-by-page update with an ongoing story. I think that a lot of these authors consider how they have to leave the reader with a satisfying “conclusion” for each page, but fail the follow up in the next page because they didn't properly set things up, sort of working on the pages in isolation rather than as a part of a sequence of pages. It feels like each new page is someone hitting fast forward when you hit the “next” button rather than feeling the natural progression. “Something happens on this page, then I will think of what happens after that when I draw the next one.” It's really obvious when this is the author's approach and makes things seem disconnected and random, and as said, often ends with defeated resignation over losing the plot.

Therefore I think it really helps to find that plot again by taking another look at what you've done in the past. But it's still easy to miss things in your own work, you already know what to expect next, and it makes logical sense that what follows is what you already wrote down. Reading it in reverse, it forces you to examine if things are really falling into place the way you intended them, if your pages are snapping together seamlessly like Legos or stacking haphazardly over each other. It might not be for everyone, and it's not something I insist everyone do, but this strange exercise has always helped me look at an old story with fresh eyes.

What creative exercises do you employ to read your own work from another perspective?

Do you ever go back and read your own work as a reader rather than an author?

Yeah, I remember my older work with a lot of negativity, but when I go back to refresh my mind on something, I find myself entertained -- and sometimes end up reading a few dozen or hundred pages (and comments) I hadn't intended to.

And going back to the stuff from "back in the day" it's like someone else entirely did it and it's almost decent, witty and clever like the creator had a plan and always quick with repartee. And I never remember half the jokes that are in there.

I do it constantly often to psyche myself up to continue as well as following the progress of the story. If I missed something before, and catch it on the reread, sometimes it'll go into a future page. Something that leads to wanting each page to stand alone is how often casual readers don't remember previous pages. How can I have a narrative flow over multiple pages when they don't remember the previous page let alone a point put forward ten pages ago. I've gotten criticism that I repeat stuff constantly. It may be a stupid piece about boobs and monsters but it helps to if you invest in following the story.

I did this as I was starting to piece together a finale (and still am). Having the framework for the "destination" together is really helping me put things together. I am now in a place where I read backwards. Then I read my end point stuff, and using the two of them, I assemble current pieces. It's kind of like building a bridge from both sides at once.

This is interesting advice; going to try it! I've been struggling with my comic - with epic space opera aspirations forced into a 4-panel strip that updates weekly, it hasn't been as satisfying for readers as I had hoped. When all the storylines synchronized, it (ironically) didn't snap together like LEGO. My problem, I think, was that I had so many ideas I wanted to work with right out of the gate that I didn't spend enough time developing any of them in particular, and then when I converged on one of the ideas, it wasn't that rewarding. Thankfully, I have some great readers who set me straight on my pacing issues, and I think the comic will start to feel more focused, and transition between threads more smoothly. Reading backwards seems like a good way to find the interesting characters, themes, and plot points. Then, you can sort of sort them out so when you finish one story, you have all the pieces for the next one ready.

That's a damn good idea... I've never quite thought of doing this before.

Funny, awesome owl 98's recent post inspired me to browse both through old drunkduck and my long deleted deviantart accounts from earlier this decade...it was like walking into the ruins of an empire that you were a part of yet had to escape before watching it fall.

I do try to do that sometimes, but I can feel you when you say that authors tend to think page-by-Page instead of a series of pages. I’m probably guilty of this. I’ll read through mine backwards and see how well it works, but I’m already aware of several mistakes. Thanks for these ideas, I’ve been reading through newer webcomics completely backwards and it’s fun!