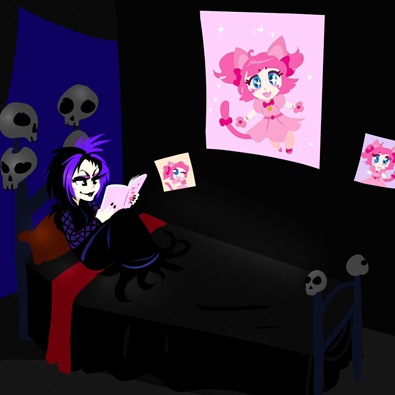 Sometimes you aim for a target and you miss– but you end up with a hit anyway in an unexpected place.

When starting a new project usually the target audience is clear, people like ourselves. After all, an author usually likes their own work and has a target reader similar to themselves in mind as the core audience. If you are doing things right however, you'll often pick up readers who latch onto your work in different ways than you expected. Lots of works have had ascended extras when a character clicks with the audience unexpectedly. However, it can be challenging and a lot of pressure when suddenly you find yourself with a broader and more diverse audience than you expected, so what should you do?

I think a good place to start is observation and research. Usually you don't need to do much of this when writing for your core demographic. If you are geek, you probably know a lot of other geeks, what they like and what puts them off. However, we all are limited to the life experience we lived, and it is a big world out there. Listen to what your audience is saying, try and read up on those people's experiences. Go soak up some media, read people's blogs and the like to soak up other people's experiences and help to inspire you.

I think it is good to examine your own work in any instance, because I'm a nerd. Even if you are not a nerd like me, it's really fascinating when it's on the subject of trying to discern the appeal to an audience you are not even actively catering to. I find it's more useful to find out what they don't like about a lot of other media than to search for meaning in the stuff they profess to love. Focusing only on what people love might tell you how to shallowly cater to people, but I think that is a dangerous game. You can quickly fall into cliche pandering and I feel like it is a good way to fall out of love with your own work. Learning what people don't like in other works can help you avoid tired, overly safe tropes. I want to get inspired to write my own story, not be told how to write someone else's. You don't want to end up being the “Mac and Me” to someone else's “E.T”.

I do find it fascinating when there are people who do find meaning and something to relate and connect to in a work that was not intentionally targeting that subject. I love the fact that people can relate to something in my story and find it therapeutic– the character's struggles reflect their own, and seeing them pull through the worst times helps instill hope in the reader. Just talking to people and learning about their life experiences and why a particular character, story arc or concept appealed to them in an unexpected way can be very rewarding and informative. Further, it can help you re-contexulaize thing from another person's perspective which can be very useful both in sharpening your work and just being more aware of both the implications and resonant themes of your work.

I have seen people utterly fall flat on their faces trying to appeal directly to the surprise demographic. You risk ticking off both your original audience as you forsake them for a major course correction, and you will come off as insincere to the audience you changed for. As soon as you're ostentatiously presenting the subject matter as “for them”, you risk sounding condescending, and you now have no excuse for little slip-ups, and the backlash will be savage! You at least have plausible deniability if your subject matter is unintentionally adjacent to the thing that people find relatable. Making it obvious you are trying to appeal to them and then just dropping the ball hard with a misaimed message just becomes insulting.

I think the best approach is to keep doing what you were doing and only worry about your unexpected audience in terms of trying not to directly insult them with either pandering or poorly executed subject matter. I think it's great to be mindful of the opinions of your audience, but I also think remaining true to your vision is very important and most people will respect that. The ones who don't will naturally move on, a little disappointed. Ultimately it's up to you who you want to write for, and you shouldn't overthink things so much that you sabotage yourself. However… you could probably use this opportunity to open your eyes to some new perspectives and enrich your story with fresh ideas that aren't the regurgitated cud that everyone else is chewing on in your chosen genre.

Have you discovered an unexpected fanbase for your comic?

Have you had a character that people attached to unexpectedly?

When I started my story it has a lot of fanservice (for guys) and then when I go to Webtoon I noticed that the main readers of my comic are girls. I was like WTF? So, I have to balance that sort of things equally.

WHen Pinky TA was updating a lot years and years ago I started to get fans who were into more traditional war comics, guns, all that sort of stuff... Pinky TA was never really that type of war comic... it wasn't even meant to be a comic initially. It was an art project, commenting on the portrayal of women in cyberpunk anime... Then it became a painting series focussing on the concept of narrative in painting... THEN it turned into a comic that focussed on things I like to draw with a theme about the seductive nature of war (cool weapons systems, fancy uniforms, a sexy lady soldier...), and the terrible, awful, realities under that exciting surface. The fans I picked up were the ones who were into that surface stuff, and that was weird to me because I'd been used to only dealing with other artists for years and years.

None of the characters seem to entice fandom any more than any others, leaving me free to kill them off whenever I feel like it.

With Webtoons I had a lot of extremely toxic BL/yaoi fans hounding me to making my two MCs kiss, everywhere else it's how they view the work. (aka: Some Smackjeeves readers think certain character interactions are cute, while Tapas users think the interactions are awful and/or dangerous.) You never get the same reaction, and that's really interesting! The feelings people have about my characters varies, which is natural given my intent to make them all awful in some way. Some voice that they hate all my characters, but hopes the MCs will grow in time. Many are attached to my one MC, Julian, a very sickly person with a temper. Others for Apollo, my completely stupid, and immature alcoholic. The POV everyone presents is always so fascinating. (2/2)

Personally I have a love/hate relationship with followers... well, more of a love/dismissive relationship. I'm very grateful for people who really like my work, or want to help me get better, but they're fleeting. The moment your work doesn't appeal, they'll move on, people who acted like your friends will treat you like a stranger. Anymore I see followers as a resource to study, to present them with a scenario to see their emotional response. When I started my current comic I didn't create it with an the intention of having an audience, but as a means to vent toxic emotions that were eating at my mind. Because of this the comic's reader base has been interesting, to say the least. It's different depending on the host site I use. (1/2)

Honestly, I am just grateful to have readers in general. While I aimed it at teenagers, I'm actually flattered that adults read it and love it. I was afraid that people would see it as another Jekyll and Hyde story, but they gave it a chance and love my take.

The reactions to some characters have altered courses a bit. I had a character I intended to kill off (Eric), and my sister was INCREDIBLY UPSET by my plan, so I didn't. She often doesn't like my plot ideas, but that upset her more than any others. I literally created him to kill off. So, it was surprising. I'm sure it happens in so many subtle ways when I create a character people react to. One-offs end up as recurring characters sometimes. It's not directly because of the audience but sometimes their reaction spurs my own interest in the character. For example, a one-off "bad guy" named Zack got an unexpected reaction, so I'm writing him into a key role in my finale.