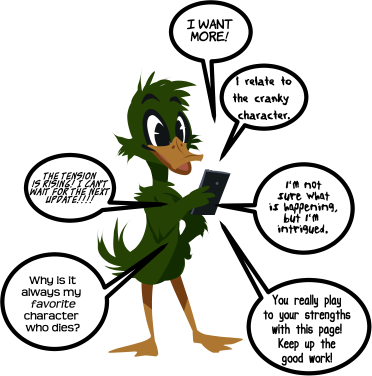 Hello, guest author Frost Fox here this week so buckle up! (Amy lost the original article thanks to a keyboard-surfing cat, so I hope you will enjoy this guest article from her husband!)

Feedback is the life blood of a comic. Comments & Fan Work are about the only payment most comic makers get and about the only thing most of us can do to help keep our favorite comics going. Sadly, with the implementation of “like” systems across the internet, comments often end up being in shorter supply than they used to. Further, I've never seen someone tackle the topic of how to leave good comments, and although much of it is common sense, I think it's worth exploring. So I'm here to discuss today how to be a good commentator and why comments are important. “Good” in this case being the sort of comments that help creators stay motivated, improve and foster a community of positive fandom which I would hope is the aim of most commentators here.

So what makes a good comment? Well, you probably know because they are the comments most people give: feedback and speculation. Feedback, not to be confused with criticism, is generally just talking about what struck you about a page. How it made you feel, what you noticed and the unique experience you had while reading. Speculation is discussing the goings on within the page and guessing where it goes next. Both of these can be hugely helpful to the artist. I don't think it is a big secret, but understanding how people are experiencing the work and learning what their trains of thought are is pretty much the way an artist can know if what they intended with a page, character art or chapter, successfully conveyed the experience they wanted. In short, a good comment shares how you are interacting with the comic in a way other people can understand and appreciate. Ideally a good comment allows someone to vicariously share in your experience, whatever that experience is.

What makes a bad comment? Well lots of things, but typically they come in a small handful of flavors.

Unsolicited Critique: Obviously media cannot and should not be insulated from criticism and some works indeed need to be critiqued. However I would say, like John Oliver recently discussed about calling people out, it needs to be appropriate, well timed and proportional. I see a lot of people give professional critiques where they are not wanted, nor helpful. Someone just starting out and making their learning mistakes, just finding themselves, is probably not going to benefit from a deep analysis of their work and being told things like “study realism” and such feedback at that stage is often not welcome. Yet I see many people offer critique like a college professor evaluating a final. A tip or suggestion, well phrased and offered casually, can sometimes be appreciated but typically people are not looking for an art student sort of breakdown nor could they really take advantage of it. Most comics are not intended to be professional works, but enjoyable projects of expression and evaluating them as professional works out of the blue is often misaimed and not helpful.

Drama: A good comic evokes passion. It draws feelings out of us. That is great! However we can possibly take those feelings too far. Generally a comment section should be celebrating the comic as a fan. Fans are of course going to pick apart and sometimes even complain about things, but those comments typically should come from a place of fandom. Comment sections are not typically a great place to court controversy. Further, they are not the best places to wage proxy comment wars on the internet to almost no effect. Sometimes a community member will really be out of line, but I would say it is best to try and give people the benefit out of the doubt and be inclusive if you can. If you cannot, I would beg you to try and diffuse situations rather than escalate them. Obviously that isn't always possible on the internet, but often I don't see people even try.

Excessive comparisons: A mistake a see a lot of people make while commenting is to always compare the comic they are enjoying to something else. “Oh this guy reminds of ”. These sort of comments are often both annoying and dispiriting to an author trying to do their own thing. Unless the character is a clear reference to another work, it is probably safe to assume the relation is a coincidence. I've see a lot of comicers become depressed by this sort of well meaning comment barrage. If you are talking more about another work than the one you commenting on, it is probably a bad comment to leave.

Gibberish: I don't see this one too often, but it can be frustrating when it does happen. Back when anime was first getting popular people would leave nonsense Japanese comments everywhere and once in a while I see a bad comment like this still, usually in the form of overly insular memes. It is hard for an author to make heads or tails of a gibberish comment and these days it might get you mistaken for a spam bot. This is not to discourage or disparage anyone for commenting in a second language where is might be hard for them to fully convey their meaning, but rather those whom needlessly make their comments more difficult to decipher, interpret and understand.

In the end. It is up to you if you want to comment and you can say what you choose to say. Your comments however are not meaningless, they often have real impact and consequence. What you say can not only impact and help continue, it can change the way other people experience and enjoy the comic too. A good comic can enlighten, stimulate and generally improve how other readers experience the comic. You can add to the community and better the comic you are reading. Or you can do the opposite, make a comic and the experience of that comic worse. Many comics keep going only because of their fans, and many comics end because of toxic fandoms, sometimes even whole comic sites. What you choose to say matters, so I would encourage you all to try to say it as best you can.

1. “I left a like, I don't need to comment.” While likes are not totally without value, they are not very useful or very fulfilling. A like tells little about what specifically people enjoyed about a page and when likes drop they tell people little about what they didn't or if it was just a slow day. Further, most artists I know just don't enjoy seeing likes tick up like an XP bar nearly as much as hearing people's thoughts and observations. Most artists want to know that their work has made some kind of impact, gotten some sort of reaction, and comments are a much better window into that than a like.

2. “I don't have anything new to say.” That is fine. You don't need to say the same thing every single page. However commenting once in a while, perhaps ever 5 to 10 pages, is still very helpful both in motivating a comic maker in letting them know they are still on track. A lot of artists are insecure and if no one mentions something for a while, many will start to wonder if they're doing something wrong even if it is just fine.

3. “The comic is good and popular so I shouldn't bother commenting.” Ah, what I like to call Usagi Syndrome. Stan Sakai's Usagi Yojimbo almost always gets very wide praise whenever it is brought up, Stan's been doing the comic for decades so it clearly remains popular so why is it no one ever hears about it? Well because it is so consistently good, people overlook it. I've read almost every issue of Usagi published and I can only recall one bad issue in all that time. Just because a work is good and even relatively popular doesn't mean it cannot be taken for granted, and if enough people take a work for granted the author might just decide that no one is reading the comic and start missing updates, which is often a downward spiral for comics. Even semi-popular and well done works really benefit from reinforcement from the audience, even just a “me too” on someone else's opinion.

I usually avoid speculating on stories because 1. If I'm right, I've spoiled something. 2. I've seen writers (even professionals) change their plot because someone guessed right, which usually tends to mess up the story and all the clues & foreshadowing they've been building up.

I try to comment on the comics I follow. I appreciate the artist sharing his or her work with us. Sometimes though, with a great drama I feel like I'm too stupid to comment. cant think of something intelligent to say.

I try to keep my comments in tone with the comic. Like, if it's an irreverent comedy comic with a blue sense of humor, then I'm likely to say something very blue and uncouth. It may not even make sense, but hopefully it'll be funny. But if something serious is happening, I'll try to leave a serious and thoughtful comment.

Naturally it somewhat depends on the creator's attitude to comments, too. For instance, some creators enjoy slightly silly comments, others don't, and as readers we should respect that once we found out. Personally, I like witty comments for their own sake, and just about all the others, too. Comments that give you honest feedback are of course the best by far, but even those that don't contain anything much at all show a creator that you appreciate their hard work. The one thing that's a definite no-go is the kind of comment that has clearly been written because the commenter is frustrated with his/her own insignificance. And spam. Fortunately, both are a blessedly rare thing here on the Duck.

The Bottom Left one is me, it's almost like magic in that the writer almost always zeros in on the character I like the most.

Reacting to the artist's comments is a huge plus. If the creator is asking questions or seeking advise in his/her comments answer! Or if the creator unburdens a ton of background information, say something.