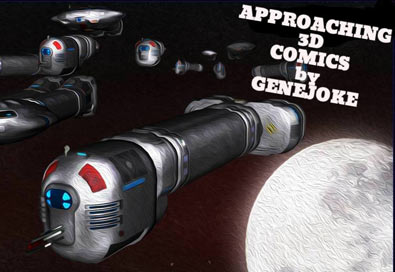 This is a tutorial by Genejoke, who agreed to share some of his knowledge for anyone who's interested in
starting a 3D comic!

He's turned his tutorials into videos, so we're reposting his tutorials for anyone who wants to check out the videos, read the written version, and wants a reminder of this approach to comic making.


When I started looking at 3d software for comic making I wasn't planning to go 3d, only to use it to aid my 2d art. I found some poses and angles on people challenging and I hoped to use a 3d mannequin to help. After looking into software and learning a bit I started thinking about making a short story with the software as a test. The rest I guess is history, well kind of. Before I ventured I to making that short story I asked for some advice from the arguably best 3d artist on the duck, El Cid. The advice I received was not to bother. Not (I hope) a reflection of my ability, rather that it's a lot of work and hard to get started. Still I persevered and here I am to give you a glimpse of what is involved.

I want to make a 3d comic, but where the hell do I start?

Drawing comics is fairly easy in a sense, you put pencil to paper and go from there. Gross over simplification aside, there's a universal starting point that everyone understands the basic concepts of, with 3d it's arguably a different kettle of fish.

3d comics are in many ways like making photo comics with dolls, or action figures if dolls sounds too girly for you. The advantage is that you have greater control over everything and it doesn't require so much physical space, your hard drive may disagree though.

My examples will be in reference to using Daz studio, it's free 3d rendering software that comes with base figures (dolls) that can be posed, clothed, customized and animated. The Daz business model is best described as freemium I guess. The software is free but you don't get much to customise with. They do have free items available and there are other places to get them from, or you can pay for extras. If you have the skills you can make your own, but I won't be touching on that here.


With Daz studio you get the genesis male and female figures and a tiny bit of clothing. You can modify them slightly and they have a few facial expressions you can apply.

They are limited out of the box. Not a problem if you're using them as artist mannequins, not so good for making unique characters. This is where you need morphs and different skin textures, which is where Daz make their money. There are free options though and I recommend anyone starting out to look at this first. Here are a couple of links with thinks to get you started.


That will get you started with characters, but what about environments and props? Again you get a couple of bits with Daz studio but you will need more, the same logic applies to this as with the characters. You can buy them or download freebies.


Essentially you need to build a library of 3D assets, this is a big job, but loads is available free and cheap. It can also be a cash sink if you invest in a lot of paid for props, but they will generally be of better quality and more complete.


In my case I started out downloading anything free that seemed like it might be useful. One thing to watch for is quality, free doesn't mean good, that said there are some excellent freebies available. Also check usage licences, some assets may have restrictions.


I've downloaded some models, now what?
First step, import it or add it to your runtime. Assets made for poser and Daz are usually packaged up so you can add the files to your runtime folder and it will be added to you content library. These will usually be to scale and have the textures set for you. If you download a 3d object (obj format for example) it may well be to a different scale and need the textures applied after.

3d models are made up of a number of aspects.

Geometry, or the mesh if you like. This is the 3d object.

The geometry will usually have a UV map, this is what tells it where to apply the textures.

Textures are the pretty patterns that almost complete the model. I say almost as the material settings can make a huge difference.
Think of it like layers in Photoshop. The diffuse is the coloured textures and patterns.
There may be other layers which will affect how light reacts when it hits the surfaces. There are specular, bump, normal maps for example. Each one could take a lot of explaining.


By now you're probably thinking it's a lot of work making a 3d comic, and it is, but it's largely front loaded. Once you have your characters and sets the rest becomes easier than drawing out and colouring individual panels. Sure you have to pose, light and render them but that's generally less time consuming than illustration and colouring.

The analogy of making a photo comic with dolls is spot on. Only the dolls are inside a computer and harder to pose.

Coolz. Will definitely check out the video; don't know that I've seen any comics-specific 3d tutorials.

Always amazing and impressive what some folks can achieve with the 3D comics.