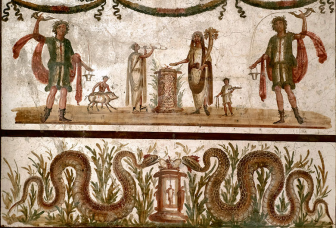 Based off of one of many suggestions left by DD member marcorossi in my last post of the Fantastic Bestiary, this one number 3 is gonna be about an aspect of ancient Roman mythology that you don’t come across all too often in depictions of Ancient Rome. When Roman spirituality is brought up it is usually focused on the main deities - Jupiter, Juno, Mars, Saturn, Mercury and so forth. The gods were believed to influence the state of prosperity for Rome and its empire as a whole, and there was indeed state-sponsored religious rituals and festivals being held to honor and appease these state gods, which where mandated to the citizens of Rome.

But the individual, daily life of any Roman was affected to a greater degree by the spirits of the earth, the spirits of the home and the spirits of those who’d passed on. The state of Rome did mandate people to appease these spirits as well, performing rituals and activities to honor them daily. But there really was no need as the people of Rome already had a good enough of an incentive to do so, knowing that displeasing spirits directly connected to your home and family was never a good idea.

Really, in the eyes of the individual Roman, it was up to the state priesthood - the pontifices (priests) the pontifex maximus (high priest), the rex sacorum (king of sacred things), the augures (diviners) and minor priests of the individual deities called flamines – to appease the gods, being the ones who organized the festivals and temple rituals in their honor. Meanwhile it was up to each individual household, especially the head of the household, to honor their own spirits. It seemed therefore to have been lesser of a spiritual botch, so to speak, to forget to sacrifice at the Temple of Jupiter than it was to eat a meal or leave the house in the morning without thanking the spirits which guided, provided for, and protected one’s family.

Jupiter, who may or may not take precedence at the time, might punish the state on a larger scale for such neglegence at a later time, but the spirits that took precedence in one’s everyday life would make their displeasure known immediately. Simply put, the closer a god or spirit was to one’s daily existence the more attention needed to be paid in order to secure one’s health and prosperity. Makes sense, right?

So it was therefore believed at the time that every household would function in accordance to how well the people of each house treated their spirits. A home where rituals were kept and the spirits were honored would thrive, while the home where these things were neglected would suffer accordingly. So if you were a Roman citizen living in ancient Rome, and you were a really succesful homeowner in your neighbourhood, you’d tell your neighbour like ”See this cool crib I got! That’s how much my home spirits L-O-V-E-S me, dude!”

There were many different kinds of spirits in Roman religous belief, but there were those who came the closest to the family, the home and the day-to-day life of a Roman. Here are a few of those:

MANES
Manes were what the Romans called the dead who inhabited the afterlife. A Mane was believed to be this spark of life that was thought to reside within the mind of a person. Anyone who died became their Mane who in the afterlife would be relegated to a spiritual role - which I’ll get to later. Roman families would have made these sculpted busts, depicting one’s diseased father or diseased mother or distant ancestor, not only to honor and remember said person, but also to have that person’s Mane inhabit that bust whenever it so pleased and make it feel welcome into the household.

These busts would usually be kept in the home’s atrium, the public room of the house where parties where thrown or really, important discussions were held, allowing the Manes to participate in whatever event was taking presence through their bust.

LARES
These were the guardian spirits and the spirits of ones dead ancestors in different eras. Originally they seemed to have been the offspring of Mercury and the gossiping nymph Lara (Who had her tounge cut out by Jupiter for revealing an affair he had with another nymph to his wife Juno, and was then escorted by Mercury to the underworld where he fell in love with her. I guess Mercury had a thing for women who can’t talk:/).

Alternately they were Manes who’d been assigned the role of guardian spirit by the family line in the afterlife. Roman families would have these cupboard shrines dedicated to their Lare, also kept in the home’s atrium. In this they were closely associated with Panes and Penates and rituals to all three were often combined. Lares were considered the protectors of the family and the home, but they were also considered protectors of the surrounding community.

Daily prayers and offerings were made to the Lares throughout the year, but more elaborate rituals would be enacted on special days such as birthdays, weddings, anniversaries as well as departures and returns from a journey. When a family moved permanently from one house to another, the Lares, Panes and Penates of the old household would move with them into the new one.

PANES AND PENATES
These were the spirits of the pantry and the kitchen of the house. It was Panes and Penates who kept the food in the house and also managed the good mood of the household. They protected foodstuffs from spoilage and even provided the means to procure food in the first place for the family. Statuettes of the Panes and Penates would be taken out of the kitchen cabinet and be placed on the table during all the meals of the day.

The family would give their thanks to them before eating and a portion of the meal would be set aside in their honor and would afterwards be burned in the hearth fire as an offering to them. The first fruits of the harvest were offered to them regularly and they were thanked at every significant event in a family’s life be it birth, a birthday, a promotion or the marriage of one’s children.

And with that I'll conclude this article with a few more words on the subject. Spirits of the household and the immidiate everyday life of people and their families has been a significant part of spiritual belief in many, many cultures throughout human history. The ancient Romans were obviously not the only ones who had this concept, but it felt like an interesting place to bring it up since we, or at least I, usually think of this concept the way it has been practiced in cultures such as in the far east and such, and not so much in cultures like the ones here in Europe.

And it’s been a really fascinating research looking into the everyday spiritual and ritual life of the ancient Roman. It is I think very enriching, if you want to learn about spirituality and its place throughout human history, to look into what practices, rituals and beliefs it was that went into a person’s spiritual world - where they lived – every – single – day - in their lifetime.

Let me know in the comments below. Now if you excuse me, I’m gonna take my Elk cane, that my dad made for me, out for a walk to honor my guiding animal spirit which also happens to be an Elk.

Great article again! I think household spirits are woefully underrepresented in fiction, as are daily religious practices in general. So fantasy characters sometimes say things like "By the abyss!" instead of "Damn!" to show that their religion is different and possibly more pagan than ours, and there's the occasional snake cult that goes all out with a show of a great public sacrifice of a virgin who will be rescued anyway... But that's normally it! Yes, there are exceptions, but most of the time I'm right, right? Roman household spirits (who I dimly remember from Latin lessons I took at school 25 years ago) could be a great starting point. Fun fact: the German word for "cheers!" (as a toast), "Prost!" (or "Prosit!" in the South), directly stems from Latin "pro sit" - "may it be of use" - which is what Romans habitually said when they poured the first sip of wine to the ground as an offering to the Penates.

It's so interesting to look at these historical practices. One of my favourites from Classical Roman times is the fascinum! But of course it is. They appear in some of my comics! I also must mention the song "Cities in Dust" by Siouxsie and the Banshees rather elegantly references the Lares and the disaster of Pompeii.