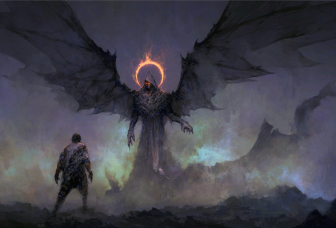 This sunday's EPIC poem is contributed by DD member TheDeeMan. This is “Beware the Necromancer”: Verse four, by Darryl Hughes aka TheDeeMan

On a vacant black morn, was darkness stillborn, a poor and fatherless bastard.

To swirl in the mass, of hell's foul warpath, and evil redeemed for it's master.

To wind winglets swirled, as to night hell unfurled, in search of souls left to plunder.

In the air winglets danced, as the soulless sat tranced, and black forms circled the thunder.

And then evil breathed, a wonderous weave, and spun the darkness like a spider.

Black threads laced the sky, if to beckon the fly, or the silhouette of a lone rider.


Prince Will rode, into evils abode, and darkness bowed head to young sire.

To tempt him it tried, to change the course of Will's ride, and lead him to death by hellfire.

Then from hell's darkest end, came a soul cooled chill wind, to taunt Will with words and dark laughter.

And with hellish delight, darkness tortured daylight, and from golden rays dripped disaster.

To earth the drips came, like the blackest of rain, to burn at the souls that did ponder.

Blackhearted souls, from still earth they arose, to bathe in the rains and to wander.

The swells that abound, on death's hallowed ground, and their voices did rise like the thunder.


Then the whispers of sin, took to air like the wind, and spoke to young Will of Jocasta.

Wind spoke of dark lore, of some vile demon spore, that tortured the frail for it's master.

The prince felt the chill, of goodness turned ill, and knew it to be fair Jocasta.

A heartbeat out of place, did change in it's pace, and pulsed in the darkness much faster.

And the bonds of still night, did but quiet her fight, against the darkness that did grasp her.

Like a whisper of air, Will was shown princess fair, and reached out in the darkness to touch her.

Then cried in his heart, watched the vision depart, and cursed at the darkness that clutched her.


Then before Will hung low, crucified in their woe, the children birthed by evil's power.

Yet plead they did still, for the soul of prince Will, and the light of his soul to devour.

Will pulled to his hand, the good blade Asrian, to ‘fend him ’gainst souls hell did sour.

“Dwell not on your woe, on what hell hath bestow, to settle in darkest and cower.

To accept it as fate, this evil mandate, as guilty as those who conspire.

To curse me with your lot, when t'was evil begot, the singe of your soul from hellfire”.

But the spawn of still night, screamed aloud of their plight, in praise of a darkened taskmaster.

Black souls echoed the screams, of what darkness redeemed, the wind answered with it's own dark laughter.

A single note cord, sang aloud by the horde, in praise of the vile Necromancer…