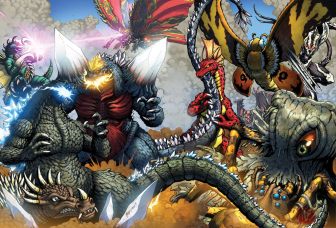 Thought I try to get back on doing Sunday articles with more meat to them. So! It’s fantastic bestiary time! And this time I’ve choosen a creature of pop culture rather then myth. The giant monster! Popularly known as the Kaiju! Who doesn’t like a good giant monster movie? You always know what you’re gonna get watching these films. A giant monster rampaging through a city, knocking down skyscrapers like they were bowling pins in a scrapyard.

Military throwing everything - including the kitchen sink – to take the angry giant down. Maybe another giant monster pops in and we have two or more monsters duking it out, leaving death and devestation in their wake as they royally rumble across the country. Kaijus, ever since the first appearance of the king of the monsters Godzilla himself in his first movie Godzilla (1954), have been used as allegories for the destructive side of human invention, particularly that of nuclear weapons, as well as our interference with the environment and the disastrous force of the natural elements.

Also giant monsters have been a theme used to explore the unforseen relationships between humanity and the animal kingdom, the strongest example of this of course being King Kong (1933). Some mentionable Kaijus - beside these two that I’ve mentioned that everyone knows already – are these handsome giants:

Mothra is a divine moth kaiju. She’s the first female kaiju and also the first to have a benevolent nature and good relationship with humans. While other giant monsters such as Godzilla frequently poses a danger to humanity with his very existence alone, Mothra will fight to protect humans from any and all giant monsters that means them harm. She’s accompanied by her two smaller twin priestesses called the Shobijin who always speak to humanity on her behalf.

That said though, Mothra has brought destruction herself though only in certain cases where her Shobijin are in danger or when she’s being controlled by some outside force. Since her introduction she’s become the most popular and prolific Kaiju next to Godzilla himself, granting her the title queen of the monsters.

Gamera is an ancient, flying turtle kaiju who was disturbed from his slumber under the Arctic ice by a nuclear blast. He then turned up in Japan where he began his rampage across the country, but was trapped inside a rocket and launched into outer space heading towards Mars. After being freed from the rocket by a colliding meteor he immediately returned to Earth where he would battle the giant monster Barugon.

This battle would establish him as the lesser of two evils compared to other giant monsters. Gamera would return to fend off against more malevolent monsters and entities, be they ancient reawakened evils or extraterrestrial invaders. Eventually Gamera would become viewed as a fully bonafied hero and a friend to the children of the world, rather then just a rampaging monster.

This three-headed dragon of a kaiju came to earth from out of space inside a meteor. A soon as he hatched out of the meteor he immidiately decided to destroy everything on Earth just like he’d done with planet Venus (Or was it Mars?) prior. Widely considered to be the arch-nemesis of Godzilla, King Gidorah is an absolute juggernaut of a kaiju that often takes a whole team of kaijus to take down or chase off.

King Gidorah, though acting on his own accord on several occasions, often acts as the subservient ally of numerous alien races that seeks to dominate or annihilate earth. In most appearances he is portrayed as pretty much just evil through and through, destroying civilizations on planet after planet just for the fun of it.


There isn’t that much to say about these giant monsters collectively. They bear similarities - the strongest one of course being that they are all very, very big - the other that a lot of them are of the reptile kind. Some of them are benevolent, acting as protectors of humans and the environment, others are just rampaging monstrosities destroying everything in their path. And - very much like pro wrestling – many of them have their face- and -heel turns.

Depending on the situation Godzilla can be either a villain, stomping and blasting Tokyo to cinders, or a hero, fighting off the alien kaiju King Gidorah from initiating his own firey rampage on the world. Personally my only experience with kaijus comes from the movie Pacific Rim (2013) which may just be one of my absolute favourite popcorn films of all time. I do understand that a lot of things have happened in the genre of giant monsters that I’m unaware of and perhaps, if there are any giant monster movie fans reading this article, you can add your own wisdom to this topic.

So what do you think of Kaijus? Are you a Kaiju fan? Where and how would you do your inevitable stomping if you yourself was a Kaiju? What fantastical creature or entity of fiction or myth, any fiction or myth, would you like to suggest that I bring up in the next installment of this series?

Comments below. Now if you excuse me I have an armed helicopter to pilot. Darn frost giants!! I’ll send you all back to Jotunheim with my rockets!!!

Mothra is my favourite of all time! And is much more complex than can be briefly touched upon. King Shiisaa is also wonderful!

Yay for old monster movies! Some people might say "Know one, know them all", but I love them all anyway. For some reason, many of these monsters - and especially these Kaiju - are ones where CGI just doesn't sit right if you know what I mean. Rubber suits and paper maché may have been a necessity way back, but they've also always been a way of stylizing. I once heard that Kaiju monsters reflect the ambivalent relation of Japanese culture with all those natural hazards over there - but whether that's true or not, they're just awesome. @hpkomic: Your students can count themselves lucky! I won't say anything against my lecturers back in the day, but I'd have loved something in that vein.

I have a whole week of lectures in my English class devoted to Godzilla and other kaiju. We look as monstrosity as a theme for analytical writing and we watch Godzilla (1954) and read a couple of essays. It's always fun. I am a huge Godzilla fan.