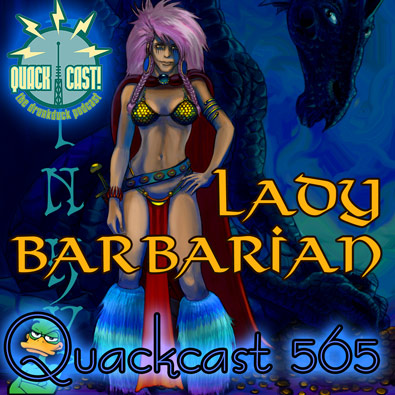 “The Girl Boss in the sausagefest”
Pitface and Tantz chat are here to chat with me about the subject or lady Barbarians: What they look like, where they originated, why they originated, what they mean, and the logic behind them. They're often overshadowed by their male counterparts (e.g. Conan), and often dismissed as simply an erotic male fantasy, but they've been around just as long and they've also had just as much of a role to play in the traditional “barbarian” mythos as the male versions. Sure, the sexy versions are abundant, iconic, and visually striking, but they're not the be all and end all!

This Quackcast was inspired by the topic of my 8th Fashion Spotlight and its focus on the barbarian woman Rose Red, I go into a lot of detail there and it's linked bellow if you're interested. for a little bit of a recap: lady barbarians go back at least as far as the Roman empire, even older possibly. In Rome they took the form of “gladiatrixes” (female gladiators), who were dressed as and promoted as barbarian fighters from exotic, uncivilised lands (Africa, all over Europe etc), as a way to excite the interest of the paying public to pay to see the fights, the same as we'd do today with wrestling and MMA. Many influences were behind this: the myth of the Amazons, the myth of Atalanta, red haired Celtic queen Boadicea, even early ideas for what was behind the myth of Medusa - she was thought to be based on the queen of a barbarian tribe rather than Ovid's much later idea that she was a virgin temple priestess.

But of course most of us know female barbarians because of their modern incarnations. They've always been around in the history of art but they had a spike in popularity with the Italian “Sword and Sandal” movies of the 1960s, then the art of fantasy art master Frank Frazetta in the 1970s. They found their way into things like Dungeons and Dragons and with the success of Conan the Barbarian and the Robert E Howard inspired Valeria in that film a whole host of lady barbarians got their own films, often exploitative and sexy. The most famous lady barbarian of the time was Red Sonja, loosely based on another Robert E Howard character called Red Sonya, but turned from an armoured fighter against the Ottoman Turks into a scale-mail bikini wearing comic book barbarian woman from prehistory.

The most famous lady barbarian to come after her was Xena, the warrior princess, played by statuesque New Zealand sketch comedian Lucy Lawless. Xena was simply a female spinoff from Hercules The Legendary journeys. The really cool thing about her is that not only did she achieve extreme popularity and her show totally eclipsed its originator, she was also an original character AND she got that popularity without leveraging the sexiness of the premise or character!

Some notable lady barbarians I can think off… Virginia Hey's Warrior Woman, Tina Turner's character, and Furiosa from the Mad Max 2, 3, and 4 respectively; Lady Death; Red Sonja; Grace Jone's character from Conan the Destroyer; Valeria (Sandal Bergman) from Conan the Barbarian; Queen Boadicea; Xena; Betty Paige's Cheetah woman (her look was probably an inspiration for Xena in some ways); Ygritte from Game of Thrones; Atalanta; Princess Merida of Brave; I even created my own version in a Barbarian Pinky TA!
Who are your faves from the this genre?


This week Gunwallace has given us the theme to Creeping through the desert ruins, not wearing overly much, heat hits like a wall, golden sun dazels and mystifies. From plucked strings to creepy atmospherics, the sound bursts in a bombastic wave of high energy multilayered noise and exotic sounds, with pounding percussion.

I think of Athena more as the archetypal Paladin than a barbarian warrior... A different sort of proposition. Not wild but civilised, holy and superior. I don't know about Camilla

Add on to my previous comment about Camilla: it turns out that camillus (female form: camilla) in latin means young boy/girl who helps the priest during holy rituals, so Camilla used as a name literally meant "consacrated girl".

I'll add Camilla from the aeneid ( https://en.wikipedia.org/wiki/Camilla_(mythology) ), she is a virgin warrior and is consacrated to Diana/Artemis, who is also close to the lady barbarian stereotype; Athena too (while not barbarian still a female virgin warrior). I wonder if there is/was some connection between virginity and warriorness.