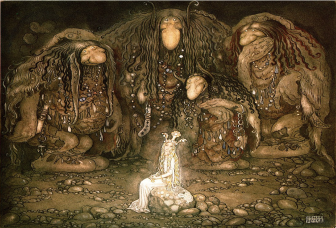 So! Back to mythology. And we are going back to my place again, good ol’ Scandinavia. In the summertime no less when the color green is everywhere, the fields are high and trolls come sneaking down from their magically hidden caves and mountain kingdoms. To me the Scandinavian depiction of trolls will always be the one accurate depiction of trolls and that is where this article is going. J.R.R Tolkien, in my mind, got trolls and ogres mixed up.

Ogres are the big, hulking brutes swinging clubs, munching up all of the hobbits in your neighbourhood - and potentially teaming up with a talking donkey voiced by Eddie Murphy. Trolls are more mysterious and more elegant then that. I’ve always considered how they are depicted in artwork by swedish artist John Bauer (the pic on top of this post) and norwegian artist Theodor Kittelsen to be what trolls looks like. Either a humanoid frame out of hills and mounds or elfish-looking fellows with big round noses and long pointy ears - each having a wild, long hair and a long slender tail with a hairy tuft on the end - being either large and whimsical, like the ones you see on the pic on top of this post, or small and cute like Hugo and Hugolina over here. 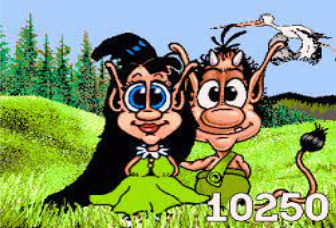 But they are also shapeshifters who will take on any looks that is convenient for them at the moment. Sometimes in old days past they would look like ordinary humans, only more beutiful and more well dressed. Often times they would make themselves invisible wearing magic hats. In days past they were considered thievish and very cunning. Objects of steel or cross shapes or reading a prayer was the way to protect your home from a troll burglary.

It could be quite difficult to tell wether you had a real human being in front of you or a troll in human form. But the trolls could give themselves away by avoiding saying certain words for magical reasons. For example if a person in a conversation would say ”mastiff” instead of bear, or ”earwig” instead of a pair of scissors, that could be a troll. The trolls were said to live in the mountains and inside big rocks and there were many tales going around about people being ”bergtagna” which is swedish for ”taken by mountain” in literal terms, I believe the english version of this word being used would be ”spirited away”.

Personally I would use the word ”Mountaken” – which I just made up mixing the words ”mountain” and ”taken” because I have a fetish for mixing words. People could be lured into a magical gate appearing through the mountain wall and would then be kept captives in the mountain for either a short time or a very long time. Inside the mountain kingdom were walls made of silver, gold and precious jewels.

The human captives would be treated fairly but still had to work for the trolls, and anyone who came back from being ”bergstagen” – or ”mountaken” - would never be quite the same again. Another peculiar habit of the scandinavian troll is to snatch human babies from their cradles and put their troll babies – haven taken on a human baby guise - there in their stead, believing they’d have a better life among humans.

A thing in the days of old was that a baby was considered a heathen up until it was baptized, and was therefore believed to be more vulnarable and desirable to supernatural entites and creatures, including the trolls. The signs of a baby being a troll changeling was that it had an abnormally large head or very thin arms, or that it didn’t grow normally, or had an unusually large appetite. Other then that it would look like any human child. Now a way to prevent your baby from snatched away was to put an item made of steel, or a psalm book, into the baby’s cradle.

If however there was a suspicion that the real baby had been snatched away and that this was a troll baby you could reverse this by treating the baby badly, by whipping it (Yikes!) or pretend that your going to throw it into the oven. You did this and mama troll would come for the troll baby’s rescue and return the real baby in its stead. And if you had a good hearing you might even have heard mama troll mumble to herself ”Those mean humans! We trolls have never been so mean to our children ever!”

Scandinavian trolls would always consider themselves the aristocrats of the forests and very much preferred to be treated as such. They were after all very, very rich, always having a chest full of gold and silver stashed away in an underground vault somewhere under a rock or under the root of an old tree. They possessed powerful and ancient magic and had their own kingdoms hidden inside the mountains. So in many ways they really are the aristocrats of the nordic wilderness. And they’ve always had their own weird sense of elegans, manners and charm to them in these parts of the world. Often being bizarre and schemeful and sometimes spiteful and dangerous, but always very intelligent and very open of heart and mind. And this is where I conclude this rundown.

So what do you think of trolls? Do you agree with me that the troll of scandinavian folklore is cooler than Tolkien, or do you think I’m being a huge snob about it? Would you whip your baby if you thought it was a troll baby? What fantastical creature or entity of fiction or myth, any fiction or myth, would you like to suggest that I bring up in the next installment of this series?

Comments below. And I have no pun to go out on this time so… happy summer, ducks😉

I think Marcorossi and Bravo might have the right of it here in a way- All the tings you mention are very much part of the description of Faerie folk and elves in the British Isles and Ireland so it's fair to think the stories probably had a common origin at some point... Though we're talking a couple of thousand years of history here so the cultural influence could have gone back and forth all the way up to recent times rather than an idea that just developed many hundred years ago and then went on separate streams in different regions.

That these fairy folk should all have great similarities shouldn't be surprising. After all Scandinavians did settle in England and Ireland and brought their stories with them. Then there's the close relationship among the Scandinavian and Germans and English as indicated by their languages. The populations did mix before the Middle Ages too and some argue for a common origin of them all coming settling to the north where Celtic speakers didn't want to go though leaving alone a much older Indo-European speaking group; the Finns. To a large extent similarities in folklore can be traced through similarities in languages.

[...] but mostly they where the same stuff in a (slightly) different sauce (e.g. one abducts to the mountains, the other abducts to the forest). With the advent of christianity, these figures were mostly interpreted as the Devil, so for example many of the legends of the Devil Bridges (there is a truckload of "devil bridges" in continental Europe) probably reflect the same legends that previously where attributed to the Faerie Folks (request for the next installation of the bestiary: the Devil Bridge, not exactly a creaturre but still cool).

My opinion is that originally all populations had a rather vague ideas of "faerie people", with local variations, but not that big, so that in reality trolls are similar to elves, baut also to leprechauns (the pot of gold), but also to dwarves, goblins etc. With the passing of times these vague folkloric ideas become stabilized, so that one sees a big difference between "elves", "dwarves" and "trolls" but in reality these were the same people, just one the british, the second the german, ant the third the scandinavian version. For example Tolkien called the same guys "goblins" in the hobbit and "orcs" in LoTR, and also on some writings called the elfs of Gondolin "gnomes" (since the elfs of Gondolin lived under the earth thei are perhaps the ispiration for the DnD Drows). The fact that today we have a lot of fantasy videogames, RpGs etc., and the influece of Tolkien who tended to sistematize his own world, create the illusion that these creatures were very diofferent, but mostly [...]

Here's another idea that just popped up: draugar -- Years ago I used to confuse them with trolls for some reason, which seems a bit stupid in retrospect. In LoTR (the first novel, that is) one of them appears as a "barrow-wight", possibly using some artistic license, but still close enough for me to notice. Unless I'm mistaken, they're something quite unique, rather than just a variety of the usual run-of-the-mill undead that haunt fantasy and horror everywhere.

This is another great, educational article that does a lot to clear up some misconceptions about trolls, some of which I didn't realise I had. I think it's not at all snobby to say that Tolkien either uncharacteristically didn't do his homework there or took a lot of artistic freedom - they behave and look like French ogres and the turning to rock into sunlight thing is nicked from the Edda (as he often did) and was actually about dwarves - just like Gandalf was originally a dwarf name. I used to think the Elfquest trolls might be closer to the original, but I'm beginning to realise now that they, too, appear to owe at least as much to dwarves than anything else and little to classic trolls. From your description Scandinavian trolls seem to have much more in common with Celtic sidhe, but are still something quite different. Also, that way the ballad of Herr Mannelig finally makes sense - I mean, imagine an ugly fantasy troll trying to entice a noble knight into a romantic adventure...