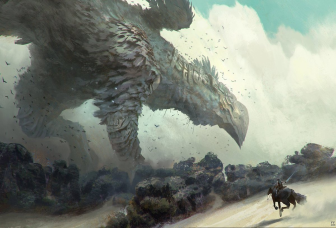 Gonna take another pause from the fantastic bestiary on this Sunday’s article and instead talk about wonder in fiction. First off, what is wonder? If you put the word wonder into google translate it is described as ”a feeling of amazement and admiration, caused by something beutiful, remarkable or unfamiliar”. Wonder is more often then not what we creators strive for when we aim to create our own fictional world, distant and foreign to the world that we know in real life.

It should always have something about it that causes the audience’s mind to go ”Ooooh” and ”Aaaaah” in astonishment of what is being visualized. A far away landscape, untouched by civilization spreading itself pristine and alluring towards a gentle sun rising. Or perhaps the opposite, a grand and alive city of ancient or foreign origin that strikes and shines in every detail of its exotic aestethic and mysterious conventions.

Or it can be something of a much smaller scale, but a no less remarkable element of the world. It can be a strange enviromental condition, or an exquisite object like a piece of architecture, or a vessel, or an item such as a mask or a jewel or a dish you’ve never seen or eaten, or it can be a person or a creature that is strikingly beutiful or unusual in some way.

It can be some sort of unexpected event like you watching little faries doing a soldier’s march across the meadow just outside your house, or it can be a scientific procedure conducted by aliens at the hospital you visit, or it can be a grand wedding cermony held in a magical dimension inhabited by high elves, or it can be a larger then life battle between two armies of post-apocalyptic metalheads – Mad Max Fury Road style - or it can be a miracle – something wonderful that should not have happened and yet it did anyway, fortune triumphing over misfortune.

It should always be a thing that brings something that the familiar world don’t, or rarely do.

The opposite of wonder, and what kills wonder, would be to ground everything into the workings of the world we know. That wonderous landscape you saw was just a computer simulation in a VR lab. That magical item you held on to for so long was never actually magical, it just appeared magical due to your own imagination and your belief that it was magical. That otherwordly creature or person that you saw was just a mirage you saw on your way through the desert. The miracle was just a dream all along.

What makes and breaks wonder can be very different from person to person. The enchanting and hopeful universe of Disney may be absolutely wonderous to one person because it is this dreamlike world of magic and epic romance that always leaves with a: Happily ever after.
Yet it can be a boring universe to another person simply because it deals with already familiar fairy tales.

The grimdark and disastrous universe of Warhammer 40k may be absolutely bereft of wonder to a non-fan simply because of how dystopian and unforgiving it is.
Yet it may be a universe bursting with wonder for the 40k fan because it has these incredible battles going on, all with a scope and scale that would be absoultely inconcievable in the real world, that always leaves with a: Live to fight another day.

Like most things in life wonder comes down to taste and preference, but unlike most things wonder will always leave someone with some sort of feeling of the far, far away or the impossible made possible.

So what do you think, dear Sunday readers? Do you strive for wonder in you own creative works? What makes and/or breaks wonder for you?

Comments down below. Take care of youselfs out there.

Even the news use a sense of wonder, if you think about it. Crime, politics, war, natural events or disasters, annual meeting of the dachshund breeders' club - unless you're already involved (which is the one other reason for news to be interesting) it's all outside of your day-to-day experience, even if it may affect it at some point. Granted, in some cases it's something you really need to know on moral grounds and because it affects everyone's safety (e.g. the Ukraine war or China's claim over the Taiwan strait), but what about a volcano eruption on the Kamchatka peninsula? Why would you want read about that? What about whatever probe they're planning to land on Mars next? You can happily live your entire life without knowing about these two, but you still want to know. The point I'm trying to make is: a sense of wonder has nothing to do with whether it's fiction or real, and it's both more ubiquitous and important than people tend to think.

There are people who equal a sense of wonder with escapism and go on to act as if that was a bad thing. They are so wrong on so many levels! The sense of wonder is actually a trope from Romanticism, when writers discovered that nature, old ruins, exotic cultures and everything with an aura of mysticism are all really awesome in both the old and the modern sense (dragons usually more so than daffodils, but that's all part of the learning curve). Ever since the 19th century, there has been a debate about how much of wonder is the ideal amount. I honestly don't know - I like both stories where the wonderous part is completely over the top and stories where it's hidden in some subtle details. I only know it has to be in there somehow or whatever it is isn't really worth bothering with.

@Ozoneocean - It's concept art from the PS2 game Shadow of the Colossus:) I own that game and have played through it many times:) And if I were to describe that game in a single word it would be "wondrous"8)

The title image provokes wonder, as it's meant to :D That's from that game about giant monsters right? I can't recall the name :( Scale always provokes a sense of wonder... Be it tiny scale models or the gigantic scale of skyscrapers and huge ships.