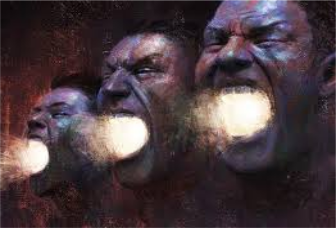 I’m pretty busy this week so I thought I’d just try out this idea I have for a new series of articles that I’ve chosen to name Poetry Time, where I will be sharing a poem I’ve written and see if it is to anyone's liking. Your opinions and suggestions are as always welcome in the comments down below. So without further ado here is my first poem titled The Outer Silence:

“My mind stepping ajar into a place previously unsensored. Uncharted, Unamed. Unknown.
I am the creatureless feature of a parallell seizure, persisting the law for a self-procedure
That part of the mind which names itself human is but that.”

“A part. Humans are but mere loose parts walking the perimeters of an illusionary parlor. Setup to become pawned by an unconscious afterfair. What is hope other then righteous despair. Scarred minds aligned to greet salvation that is not known. Not named. Not charted, nor sensored.”

“Silence is the true sound of reality. The world is but one of many tiny, little echorooms trapped inside a void of silence. All sound reverberates from silence. Silence bading, an echo fading, til silence comes again.”