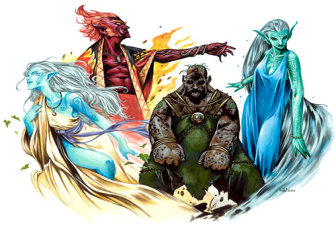 Well, look! It’s Sunday again! And for this here Sunday, Sunday, Sunday article I thought I’d start this new little series of articles that the awesome Quackcast 575 inspired me to do. I shall call it the Fantastic Bestiary series, which will be a series of articles where in each of these newsposts (that I might make every Sunday, or every other Sunday depending on my mood and depending on your response) I make a rundown on a creature, race or entity from any kind of fiction and/or mythology. And I also thought I’d involve you readers a bit extra in this, by letting you leave suggestions, in the comments, on what creature, race or entity from fiction or myth you’d like to see me make another Fantastic Bestiary article about in the future.

So for this Fantastic Bestiary number 1 I’ve chosen the mysterious and, at least from my point of view, not even nearly, fully explored race known as the Jinn (Popularly known, primarily through Disney’s Aladdin, as the Genie).

Depending on belief system the Jinn has been said to either have been a race of people of extraordinary abilities created by Allah, or just magical creatures that isn’t associated with any particular creation story. According to islamic tradition the Jinn was a mighty race of people said to have been created by Allah from a mix of fire, or smokeless fire, on a Thursday, the day after Allah had created the Angels.

It has been speculated in modern times wether the Jinn’s origin of smokeless fire is to be interpreted literally or as a metaphor for some type of energy. In any case the Jinn were a people very similar to humans, but made much more powerful and more capable then the humans, not to mention given a far longer lifespan, living thousands and thousands of years of age, and having a constitution that makes them invisible to human senses, a trait they share with demons and angels. It is a thumb of rule according to this tradition that all angels and demons are Jinn, but not all Jinn are angels and demons.

Jinns, like humans, have the need to eat and drink and also have the ability to give birth. Also like humans they have the choice to be believers or non-believers in the power that be and are thus also subjects of being sentenced to either heaven or hell. Even though humans generally lack the ability to detect Jinns with only a few having the rare gift to do so, including notable figures such as the prophet Muhammed and King Solomon, stories speaks of interactions and even relationships between humans and Jinns, and according to some stories even relationships that bore half-human, half-jinn offspring.

The Jinn was said to have walked the earth over a thousand years before humans were created. During this time the Jinn became drunk off of their own power, filled with unbridled vanity and pride, bringing forth an era of widespread corruption and injustice much to the sadness of their mighty creator. After ignoring all of Allah’s warnings the reign of the Jinn would meet a bitter end, as Allah saw no choice but to send down his Angels to fight the infidel Jinn and cleanse the Earth of almost all of the Jinn.

Then, when Allah created humans out of clay on a Friday, he would show his new creation to all Angels and remaining Jinn and command that they all bow before the first man, named Adam. Most angels and Jinn obeyed, but one named Iblis refused to bow before Adam. He argued with Allah that because he was created from smokeless fire, and not clay like Adam was, he was superior to Adam and shouldn’t have to bow for him.

For this arrogance Allah banished Iblis from heaven and condemned him to hell, from where he would thenceforth tempt humans from walking the rightous path and share the same faith as him (So Iblis became Satan then basically). It is yet unclear wether Iblis was an Angel or a Jinn. The rule of thumb was after all that all Angels are Jinn, but not all Jinn are Angels. However, Angels according to the tradition was not created with the choice to disobey Allah, but Jinn was. So it would be more sensible that Iblis was a Jinn who choose to rebel.

Here’s the fun part. Though there are many beings that exist within the definition of Jinn, the Jinn in of themselves consist of several subspecies. Here are a few mentions:

IFRIT
This subspecie of Jinn lives in societies much like humans, following the example of arabic tribes and clans. The Ifrit have the power to grant wishes and are also known to be able to take humans as husbands or wifes and even have children with humans. Most of them are thought to be rather wicked and malevolent however, and are best stayed clear from. The Ifrit are believed to dwell around ancient ruins and are also said to be protectors of the egyptian pyramids, as well as burial grounds.

MARID
The Marid are one of the most well-known types of Jinn and are also thought to be the most powerful. The word “marid” itself means “giant” speaking of their large size. They have the ability to shapeshift and, you guessed it, grant wishes, though extracting these wishes from them come with a high cost, either by having an epic battle with them, or imprisoning them with magic, or performing a ritual in their honor. An extraordinary amount of flattery might also work. As you probably figure by now, they are very likely the source of the lamp and the three wishes legend, and the jinn that the modern day genie is based off of.

JANN
Jann are shapeshifters that roams the desert and are said to take the form of whirlwinds and white camels. They are some of the most friendly and open-minded Jinn and were among the first to come in contact with humans. They can however be rather mischievous as they have the ability to hide or reveal an oasis in the desert, depending on wether or not they like the travelers that they encounter in these places. The Jann are also enemies to the Ghoul.

GHOUL
The Ghoul are the most horrifying and most feared among the Jinn because of their ability to shapeshift and because of their craving for human flesh. Most of the time they are content to feed on the corpses of dead humans, but will sometimes prey even on the living, making them a great threat to humans. Ghouls are thought to dwell near and around graveyards, ruins and areas that are mostly uninhabited. They tend to attack people who travel alone or travel in a small group that can be overun by a Ghoul pack. Female Ghouls are especially feared for their ability to appear as normal, beutiful women, who will tempt men to marry them so that they later on can devour them.

There has also been types of Jinn who’s been designated by their color:

Oh, and did I mention that the Jinn not only roam and dwell here on earth. They also have their own plane of existence known as Qaf, or Mount Qaf, which is a range of mountains made of emerald, hence why it’s also referred to as the Emerald Mountains. Qaf is said to encircle the earth outside the ring of ocean, invisible and inaccesible to humans, and is also said to be the place where ALL creatures and entities of myth and legend hangs out. And it is said to be ruled by the most ancient Jinn, from whom all Jinns are descended from, named Jan ibn Jan.

There’s a lot more, but this is where I choose to conclude this rundown. Overall I think the Jinn is a fascinating, mythic race with a vast spectrum of lore behind it, of which I've seen very little of out there in works of modern fiction. I find it rather disappointing that the Jinn as this multi-faceted race of people, with their own mythology, landscape and society, hasn’t been more explored and more expanded upon beyond the story about the genie, the lamp and the three wishes. There is Soooo much more to the Jinn then what Disney and most outlets have showed us, as I’ve displayed with this article. There’s enough material here to make a fantasy epic based on the Jinn, and Jinn society, alone. And so I hope this will inspire storytellers reading this to take a bold and adventurous dive into the mysterious and ever so expansive world of the Jinn.

So what do you guys think of Jinn (The race not the drink^^)? Do you like this new series of articles I’ve started? What fantastical creature, race or entity from fiction or myth, any fiction or myth, would you like to suggest that I bring up in the next installment of this series?

@cdmalcolm1 - Awesome! Glad that I could contribute with some new ideas for you with this. That is part of what I try to do with many of my articles, and I think now that doing these might do that job even better. That last part you wrote there sounds like a hint to what fantastical specie or creature I should research next. Something about singing voices and searching. Hmmm...🤔🤔🤔

Well. I learnt something new. I never thought of Jinn As a species let alone Angels. I always thought that Genies were humans cursed or tricked into being a Genie. Something to look into. Coming from this I might even create another hero and or villain for my story. I think it’s cool that you are doing fantastical creatures. It leaves my imagination running wild of a new storyline I may use when I get writers block. So, I guess… what type names are used for these ppl? {singing voice} Oh google…?!

@Ozoneocean - Thank you, Oz^^ I've researched the Jinn before in the past. It is such fascinating stuff, really gets your imagination going. I absolutely recommend fantasy writers to look up Jinn mythology if they want some cool ideas👍👍👍

@kawaiidaigakusei - Thank you, kawaii:) It glads me a lot to hear:)

@bravo1102 - I see. I can see the myth of Jinn going as far back as Mesopotamia. Right there at the dawn of high-culture and probably even prior to that. I've read through some of the book of Enoch. Very unusual depiction of the angels in that page of the old testamentental days:P

@Bravo- The idea that Aladin or any part of the story was Chinese is in error... The "China" was used as a name for a far away place to show that particular story was happening on the eastern borders of the Persian world, but the story itself had the same Persian settings and characters as the rest because the author had no knowledge of that region. It was just a placeholder for "way east of here".

Ifrit reminds me of Final Fantasy 8; Djinni remind me of American Gods. This is a very interesting topic of discussion, excellent writing, Andreas!

A lot about the jinn goes back to Mesopotamian demonology and Zoroastrian lore. So it has roots deep in human story telling and myth making. The story of the jinn not bowing to Adam is from Hebrew apocalyptic tradition and versions appear in Enoch and gnostic works. You would be surprised how much of the jinn lore appears in old Hollywood Arabian Nights movies and the TV sitcom I Dream of Jeannie. A lot more than in Disney movies. Aladdin has also been told several times including a great version in a TV miniseries which portrays him as he was originally presented. Chinese. One traveller's tale told that the Chinese were great sorcerers who had mastered the jinn and that is how they created their great empire far on the other side of the world.