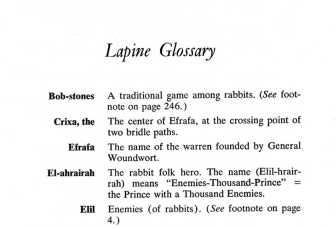 As a compulsive - and rather obsessive – writer I often find myself tinkering around with language. And I’ve always found the creativity and imagination that can go into the language within a fictional world to be similar to that of an illustrator. When done well it can bring color and flavour to what otherwise would be a rather generic experience. One example of this that comes to my mind is Watership Down.

In his 1972 novel Richard Adams created Lapine, which is the language of the rabbits of Watership Down, which was also used in the 1996 sequel Tales of Watership Down and has appeared in both television and film adaptations. The language cannonicaly consists of a few dozen words that are mostly used for describing names and roles among the rabbits, as well as the creatures and objects of their world. Words such as ”Elil” and ”Efrafa” – both words mentioned in the glossary above – grew organically and piecemeal out of the story as Adams wrote it.

Adams once commented that the idea he had regarding the language of Lapine is that the words should sound ”wuffy, wuffy” as in the word ”Efrafa”. Now, I’ve personally never read the novel or its sequel. My experience of Watership Down came from the animated series that appeared on Netflix. The rabbits would use these words that I didn’t always quite make out what they meant, but I loved that it was there.

I loved that the rabbits had their own words and terms for things that reflected their mindset, their worldview and their culture. It made the world of Watership Down - as I saw it in that animation - come more alive and feel like it had its own personality. And this is a concept I’ve been tirelessly trying to establish in my own fictional works. I may not have invented a language (yet) but I have created some terms and slangs that are thrown around in my little webcomic universe.

Slang terms such as ”All cheek and no shake” is something you’ll see in Molly Lusc, which is Port Hommerond street slang that is a response to someone being brutally honest or keeping it real in the manner of the moment. In Idfestation and, particularly, Imsies: The Imthology you’ll have names such as ”Imsy” and ”Amsy” pop up a lot. ”Imsy” being the name of these tiny, magical fairy-like races that are native to the Isles of Helix – where most of my comics take place – and ”Amsy” is the Imsies name for those who aren’t Imsies - this includes humans.

Now, as much fun as it is to come up with these things I have been taking a few steps back with it lately, so not to try to reinvent the wheel with it too much. After all I still want my stories to be comprehensible, and to do that I can’t exactly push any and all kinds of words and adjectives onto the reader. I feel like that if your gonna push new words onto your reader, the words should be as specific, and as descriptive if possible, as they can be in order to not confuse and derail things for the reader down the line.

In my case it was words and terminology regarding supernatural powers. What I decided to do - after endlessly struggling with naming and defining these elements – was to have it all simply be commonly referred to as magic, while giving some alternative linguals to it used by the Imses and those involved with the world of the Imsies. Magic used by Imsies would be referred to as ”Imsay” by the Imsies, rooting back to the origin word ”Im” which is the Imsy word for the ”being” or the ”essence”, or the “soul” if you will, of an Imsy. For Amsies it would be the same except you switch out ”Im” for ”Am”, which means the same but for Amsies.

The source of all magic would be called – once again by the Imsies – the "Um”, which is a name I took from the expression of hesitation or pause of speech (ummm?), referring to how the Um is this metaphysical place – or alternative reality if you will - that does exist but cannot really be described by the senses or named by language. So that’s some of my own fictional language that I’ve been tinkering forever with and probably will tinker some more with in the future

So what about you guys? Have you been experimenting with language in you own creative works? What are your thought regarding the process of creating a fictional language? Do you agree with me that it can aid in bringing personality to a setting or do you find it excessive and/or pretentious?

Let me know! Comments below! And I’m done rhyming! Til’ next time!

This was fun to read. Watership Down's use of language actually inspired me as well to develop the languages in my own work. There was something wonderful about getting to add an extra layer of world-building AND character with that addition.

A great article and fascinating to read too. A Clockwork Orange by Anthony Burgess was the first to impress me with his clever use of new slang. I've often been surprised that following it's cult status some of the expressions didn't carry into the real world. 'A pain in my Gulliver' is one that often makes me smile when I have a tummy ache or lower! ---But apart from that I totally agree with what you say about using words in the same way an artist would use their paint palette. A single word can make so much difference to a sentence, especially if it seems to contradict the meaning or suggest something more personal about the character. When I read Catcher in the Rye it was the amount of times Holden used the single word 'really' that conveyed how deeply insecure he was.

Interestingly, my last world-building project, which has yet to see the light, consciously does the opposite (kind of). Instead of having an assumed language that is "represented" as English (or German in the German version), it is made plain that everyone actually speaks the language the story is in. There are snippets of other languages in there, all of which exist (or used to exist), and it's been fun to play with them so far, whether I actually speak them or not. I just hope the final result won't put off those who do.

I've always thought of language as a highly interesting plaything rather than a pure means of communication. (After all, most of your really essential daily communication could be achieved by pointing and grunting, so language must have been developed with something more in mind.) I'm not a professor - thank Heavens! - but I did take linguistics courses while becoming an English teacher, and they do kind of help, if only because linguistic knowledge keeps you keenly aware of one or two things you'd normally just use without a second thought. Linguistics also requires you to look into other languages you don't actually speak and don't plan on ever learning for real. As a writing tool, it gives me a lot of variety and makes world building so much more fun. Language, culture and their surroundings are inextricably linked, and if you don't keep that in mind both the characters and the world may lack a certain something.

Creating language stuff is a LOT of work. It's fun and rewarding though because if you do it right it makes your world more immersive and it makes you more invested in it. If you do it badly though you're just giving your audience homework. XD Even if you use real existed words that are just super obscure it can be an issue. I remember Stephan Donaldson loved to do that, just drop in ULTRA obscure words that are so rare they're no longer in any dictionary in their original form, and they didn't have adequate context to work out them meaning from his text so they were little black holes of mystery. But yeah, you don't have to be a linguists professor like Tolkien to make a decent language, but it's not easy.