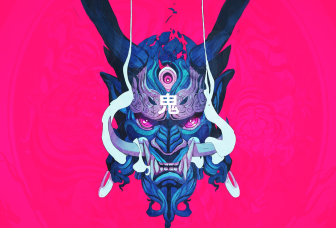 And we’re back with Fantastic Bestiary number 6. Being the number 6 in this series of articles I thought I’d bring up a mythic creature of a particularly devilish kind of aestethic. And as this week’s featured comic, featured by our beloved Ozoneocean, happened to be about an Oni, I’d thought it be fitting to have the Oni be the subject of this Sunday’s newspost. Being depicted as the quintessential demon or evil spirit in Japanese tradition, the Oni is one of the more mysterious creatures you can come across in Japanese folklore, that also serves as a common feature in the annual Setsubun spring festival in Japan.

The Oni is a type of japanese Yokai, which means ”supernatural- or -strange creature” and is often likened to creatures such as demons, ogres, orcs and trolls. The name Oni comes from the word ”On” which means ”something to hide” or ”be hidden”, which refers to the Oni being a monster that typically don’t like to be seen by humans, that can also take on the form of humans or animals or be completely invisible. Oni are known for their hideous and terrifying visage, as well as their wrathful and uncontrolled nature, being associated with disease, calamity and misfortune.

They are typically portrayed as variably large and having a ogre-like frame - with one or more ox-horns growing out of their heads, sometimes having three eyes instead two and/or having extra fingers or toes. They come in many different colors of skin and are stereotypically dressed in loin clothes made of tiger pelt, and carrying around iron clubs which they swing with superhuman strenght and power. They are typically male in the old traditions, but more and more female Oni have made their appearance in japanese storytelling with time.

According to japanese Buddhism Oni constitutes one of the six orders of life in the cycle of birth, death and rebirth known as Samsara. When a particularly wicked person dies it is believed that they will be either reborn or transformed into an Oni. In some stories a person can be so wicked that they transform into an Oni even before they die. According to the myths of Shinto, which is the indigenous nature religion of Japan, a part of the soul of either a deity or a mortal – known as an Aramitama – can become an Oni if that deity or person has been insulted or wronged in some way.

Oni are said to reside in Jigoku – or buddhist hell – where they serve its ruler, Enmna Daio, punishing the souls of those who’d been wicked in their past life, but not wicked enough to remanifest as an Oni themselves. Oni will even rise as spirits from Jigoku to capture the souls of dying wicked people and drag their souls down back with them to be tortured for an eternity. They are also said to be able to possess people and cause natural disasters – like mudslides and earthquakes – as well as spreading deadly sickness.

The different skin colors - similar to the varying skin colors of the Djinn - plays a huge significance as each color – red, blue, yellow, green and black - represent one of the five worldy desires in Buddhist philosophy. The most popular Oni being the Akaoni, meaning Red Oni in japanese. The second most popular being the Aooni, which is the Blue Oni. Which of the five Buddhist worldy desires each color represent – and what their japanese names are - is as follows:

Oni are popular characters in japanese art, litterature and theater, where they usually play the villain, such as in popular fairytales like ”Momatoro” (Peach boy),” Issun-boshi” and ”Kobutori Jissan”. The Oni have however been depicted in a less malevolent light in modern stories about them such as ”Oni Mask” and ”Red Oni Who Cried”, sometimes depicted as protectors instead of evil monsters. The Oni that is regarded as the most famous and most powerful of all Oni is the one named Shuten-doji, who’s legend has been told and reiterated in various pieces of art, litterature and traditional performance arts since the 14th century.

The oldest version of this story recounts how - during the reign of Emperor Ichijo (r. 986-1011) – a huge number of people were reported missing in the capital of Kyoto, most of them being young women. It is determined that the Oni-king of Mount Oe had abducted these people. So the emperor then commanded the warriors Minamoto no Raiko and Fujiwara no Hosho to gather a travelling party, go to Mount Oe and slay the Oni.

On their journey the party encounters a group of four men that are four deities in human form, who gives Raiko and his party the recommendation to dress up as Yamabushi priests – who were these ascetic hermits living in the mountains. They also encounter an old women doing laundry by a river who explains that the kidnapped women were being forced to act as maidservants to the Oni, who would then wantonly murder these women eating their flesh and drinking their blood.

Disguised as priests they arrive at the mountain lair of the Oni and convince the Oni-king to give them lodging. The Oni-king treats his guests with sake while telling the tale about himself, how he’s name was Shuten-doji – being known as the ”sake-drinking lad” by his Oni underlings due to his love of drinking Sake – and how the Oni had long ago been displaced from their ancestral ground in the Hira Mountains when the Enryaku-ji temple was built nearby.

Raiko then offered Shuten-doji the sake that was given to him by the four deities, which upon drinking it left the Oni-king weakened of his strenght (pretty similar to how Odysseus debilitated the cyclop by getting him drunk on all of his wine in the Odyssey). The warriors then did away their priestly clothes, revealing the armor and the weapons they’d kept hidden underneath and stormed the Oni-king’s sleeping quarters.

The four deities appear onto the scene and aids the warriors by holding down the Oni’s limbs. Raiko then cuts off Shuten-doji’s head with a swift stroke of his sword. The severed head was still alive though and came descending down onto Raiko snapping its jaws at Raiko’s head, but this attack was repelled due to Raiko wearing two of his men’s helmets on top of his own. The party then returned triumphant back to Kyoto with the Oni-king’s head which was laid to rest in the treasure house of Uji in the Byodo-in temple.

Last thing I want to bring up about the Oni is their role in the Setsubun festival. A festival that the people of Japan celebrates to welcome the healing and vitalizing forces of the new year’s spring, while driving out the lingering evils and ailments of the last year’s winter. This is were Oni and soyabeans play a key role. Crops such as soyabeans have since ancient times been believed by the japanese to possess the power to drive out evil spirits.

During the festival adults will be wearing Oni masks and the children will be throwing soyabeans at them. People will throw soyabeans all around shouting ”Oni wa soto, fuku wa uchi”, which in english translates to ”Devils out, blessings in”. As you can imagine, at the end of the Setsubun you’ll have your house full of thrown soyabeans – and no La Befana to sweep it up with a broom for ya’^^

All of this being said though, it should be noted that the Oni are not generally considered intrinsically evil in japanese folklore. Generally they're just considered to be very wrathful and uncontrolled, and are more often then not acting as a by-product of the more ruinous actions and conditions of mortal beings and the powers that be. Something that could be considered to be the deal with demons in western folklore as well, depending on how you look at it.

And with that I’m finally done. So now to your thoughts. Would you throw soyabeans at an Oni? Would you as a storyteller portray the Oni as stock monsters, or would you do something a bit different? What fantastical creature or entity of fiction or myth, any fiction or myth, would you like to suggest that I bring up in the next installment of this series?

Comments, and no soyabeans, below! It’s good to be doing these again!

I vote next to do Goblins. Or if that was already done, Gnomes.

Oni were, in days of old Japan, often identified with mountains and regarded much as gods, but they came to occupy a variety of different roles heavily influenced by Buddhist mystic mythology and plenty of other interesting things! They're very interesting, as are all youkai -- I encourage anyone to read more about them. I also am obligated to point out that they have become gay comic icons, because they're usually big muscular men who don't wear a lot of clothing, so they're a popular subject and pretty well-loved, in their modern form. Interesting how things develop with society and culture.

There actually is an Oni emoji. 👹 So it is a well known trope. Lots of great Japanese live action horror in addition to manga and anime. If you watch it in Japanese you'll often see them say Oni but it'll be translated as demon. If anything demonology has been made very dualistic in Western culture and differences aren't so clear cut elsewhere in the world.

Thank you so much for another very informative post! I've never really been into mangas and anime, which is probably why I'd completely missed out on the topic of Onis before (I just thought Oni was a Finnish first name (which is actually spelled with two n's) and found it slightly puzzling in the context ;) ). But they're fascinating!