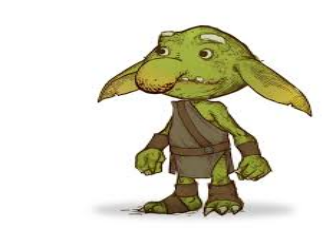 So it is Sunday again. Following up on the suggestion left by Kou the Mad in my last article, today’s Sunday’s Fantastic Bestiary post is gonna be about Goblins. We’re pretty much all familiar with goblins. Ever since Tolkien they’ve become a common stock creature in the fantasy genre, high-fantasy in particular, and it has been part of european folkore for quite some time. The english version of the Goblin, being the one we know today, originated from anglo-norman folklore in the 14th century. The origin of the word goblin is disputed, it may derive from the german word ”Kobold” or the medieval latin word ”Gobolus” or the greek word ”kobalos”, which means ”rouge”.

Traditionally the goblin is depicted as a wandering sprite that is usually just mischievous, but can be unpleasant, vengeful, greedy and outright malicous. A small portion of goblins have a kinder or more neutral temperament to them, but most of them are mean troublemakers. Goblins are believed to live scattered among the mountains or inside dark caves and mines, but may attach thelselves to households, where they will perform mischief such as banging on pots and pans, snatch away the nightclothes off the bodies of people who are asleep, move furniture around and rap on walls and doors and be gone out of sight when people come to investigate.

However, they are also believed to help parents discipline their children, by given the children presents when their good and punish them when they don’t behave (yes, apparently even goblins wants to have the job of Santa Claus). Living in the mountains they are said to lay in ambush to snatch away anything of great value, such as gold and jewelry. Goblins possess magical abilities of varying nature. Some possess fairy-like powers similar to witches or wizards, others possess more demonic abilities that they only use for evil ends.

We commonly know the goblin as this figure that is green of skin and has an unruly hair, but different depictions of the Goblin in varying countries and traditions have spawned many different types of Goblin, often referred to as sub-races of different appearance and abilites. Here are a few mentions.

KOBOLD
This is the type most of us think of when we think of Goblins. Being this magical, house-elf looking creature similar to that of Dobby in the Harry Potter franchise.

TROW
Trows have the ability to shapeshift into human form. They are often depicted as small of stature and usually very ugly in appeance.

HOBGOBLIN
This is one of the more mischievous type of Goblins. The ones that likes to preform practical jokes, but usually has a good relationship with humans.

KNOCKER
Knockers are similar in temparement to the Hobgoblins. They dwell inside mines where they will befriend miners as long as they stay on their good side.

Now, the thing about the Goblin and everything I’ve brought up in this rundown is that depictions of the Goblin and its related types is very variable and is often conflated with other creatures of myth such as Faries, Trolls, Ogres, Gnomes etc. The Goblin to me is one of those strong examples of just how topsy-turvy european folklore can be, especially the folklore from the middle ages. So I think I’m just gonna settle this article from here. I’m sorry if it doesn’t feel as in-depth as the previous articles. My energy hasn’t been in top shape lately.

But if you wanna fill in the gaps you can do so by telling me what you think. Should Goblins be Santa Clauses? Do you find Goblins exciting regardless? What fantastical creature or entity of fiction or myth, any fiction or myth, would you like to suggest that I bring up in the next installment of this series?

Comments down below. And let us be assured that you’re not some mean, green thing who’s tapping on the commentors key board while the commentor is outside taking out the trash^^

IIRC in AD&D 2nd edition kobolds were described as reptiles with a doglike face, hence the confusion.

@Kou the Mad: That's also thanks to D&D! They were lizards, then dogmen up until AD&D when they were officially made lizards again and dragonkin. I'm still of the opinion that they should have made up their own names for their bestiary, but the fantastic fantasy webcomic "Dear Rider," has an explanation for this so brilliant that I've accepted the INO D&D kobolds. At least a little. :)

@Amelius My first version of Kobolds was from Suikoden, so I still think 'Dog Men' when I hear the word Kobold.

Thanks to D&D though, people have the wrong idea of what a Kobold is and think they're dragon-people, so it pleases me to see this. There's also the Klabautermann, a Kobold of the sea. :) Though, Kobold and Knockers also have similar attitudes haunting mines, we get the word "cobalt" from Kobold because miners insisted the toxic mineral was used to trick them into thinking they'd found a copper vein. Other goblins I like: The Scottish Redcap and the Japanese Tengu. I really love goblins, but I hate people who use them to push hateful messages like a certain author of a certain overrated YA fantasy series.

Watch "Goblin Slayer" and I bet you wont like these little guys.....hehehe

Personally I think that people in the past had a general, fuzzy belief in fairy people, and these fairy people got many different names in various cultures, but where religion didn't formalize these beliefs there is a big confusion and overlap, so that goblins, kobolds, dwarves, fairies, elves, leprechauns etc. fundamentally were the same thing with different names, and we just see them as different today because modern fiction tends to differentiate them.