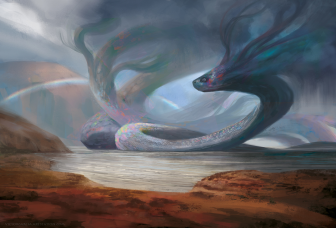 In myth the Rainbow Serpent is, as the name implies, the rainbow itself and is said to inhabit particular waterholes, springs and other bodies of water. This has within certain explanations been interlaced with the fact that certain bodies of water can exhibit spectral colors through the diffraction of light. Likewise with crystal rainbow quartz crystals and particular seashells which are used in rituals dedicated to the Rainbow Serpent.

Dreamtime, or the Dreaming, is a term used by archeologists to represent the Aboriginal Australian Everywhen, a spectrum of the past, the present and the future, as an un-fragmented sense of time, where the land of the world was/is/will be inhabited by figures and creatures of supernatural nature. Stories of Dreamtime tells of totems and great spirits in both animal and human form that shaped the once featureless land into what it is now and historically.

Among these stories it is told that the Rainbow Serpent comes from beneath the earth and creates huge ridges, gorges and mountains as it rises up pushing the ground upwards. The Rainbow serpent itself is an immense entity that inhabits deep, permanent waterholes and is control of the world’s most precious resource - water. The Rainbow Serpent is considered by some to be the creator of everything in the entire universe

In some traditions the Rainbow Serpent is considered male and phallic in form, in other traditions it is considered female and is described having female breasts, and in some others the entity’s gender is considered ambiguous or androgynous and its form more vivid or outright indescribable. The Serpent is also sometimes described having a crest or mane or even a beard, and possessing a double-body. It can also sometimes be associated with other animals such as bats, crocodiles, birds, dingos and lizards, all associated with water.

It has also been associated with another creature of aboriginal Australian mythology called the Bunyip, a fearful water dwelling, supernatural animal. Regardless its form it is always the ruler and creator of all things water. It replenishes the water of the land slithering across it and it stops the rain shooting itself up in the sky forming a rainbow. It creates rainstorms, cyclones and thunder when angered and it is a healer as it controls the circulation and menstrual cycle of blood. The Rainbow Serpents have been an object of worship and rituals throughout generations and has inspired many cultural artifacts such as artwork and songs, a tradition that continues til’ this very day. The earliest known rock drawings of the Rainbow Serpent dates back to more then 6000 years ago.

One ritual of mention is the one regarding the myth of the Wawalag sister of Arnhem Land in the Northern Territory, which marks the importance of the female menstruation process and the establishment of the Kunapipi ritual of the goddess, in which the Aboriginal Australians allegorically recreate the Rainbow serpent eating the Wawalag sisters through dance and pantomime, and is regarded as a fertility festival. The menstruation cycle is sacred to many Aboriginal Australian cultures because it distinguishes the time when a female is capable of bringing life into the world, putting the woman on the same level of creative abilities as the Rainbow Serpent.

And this is where I conclude this rundown.

So what are your thoughts on the Rainbow Serpent? Has my rundown of it made you interested in Aboriginal Australian mythology and/or culture? Will you lift your glass of beverage, in a gesture of gratitude to the Rainbow Serpent, next time you see a rainbow in the sky? What fantastical creature or entity of fiction or myth, any fiction or myth, would you like to suggest that I bring up in the next installment of this series?

Comments down under, mate. And have a nice Sunday.

Haha, no worries! LOL perhaps it's actually the Rainbow Serpent? People get caught up in its motions ^_^

@Oz: That part about rips is one of the things I'm actually pretty good at explaining - I teach Geography as much as English. Got to remember to take a photo next time I draw my riptide illustration on the blackboard to show it to you just for kicks. Black board, black humour, that's all I'm saying right now. ;D But cheers for your concise explanation all the same! I might nick it for my students, if I may.

@PaulEberhardt a "Rip" is a riptide. It's a huge circular eddy in the ocean close to shore, it typically grabs unwary swimmers and drags them out to the deep water. They don't even realise till it's too late, but even if they do it's very hard to escape. Out there they could get attacked by sharks but usually they just become too exhausted to swim back and are in real danger of drowning. (happens a lot unfortunately)

Yes, the Dreamtime is basically a time in the past when gods created the earth, then formed it, when humans started to populate it, when the legends and myths were created. No one knows when that was, it's just "the dreamtime". But it can also be now if you're communing with the spirits (I think).

That was excellent Andreas! I got chills reading that :)

This is fascinating, and I think you did an awesome job bringing it into terms us Europeans could grasp. You see, with my year 9 English classes the topic currently happens to be Australia and the textbook introduces terms like rip currents and Dreamtime, to name but two, giving a German translation but never explaining them. The kids know I'm also a Geographer and rely on me to do that (and one of the blackboard drawings I quickly become notorious for at every school I work at). In the case of Dreamings I've always felt that this is something I could never explain adequately, simply because this unique concept of time and space seems to be something you must have grown up with to truly understand. My explanation sounds similar to yours, so there's hope we're not completely off the mark. Btw. if you can do a fairly true-to-style x-ray-painting of an Emu with coloured chalk (because a dot painting takes too long) you'll have a good distraction to steer the topic back into safe waters.