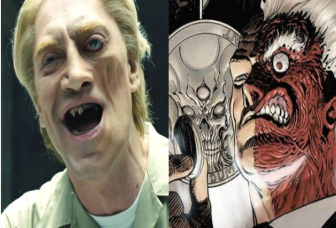 This is just a curious little topic that have recently come to my mind. From time to time I’ve seen people in popular media make comparisons between James Bond and Batman. First time I encountered this comparison was in an episode of Friends long ago. And I see people in social media make comparisons of these two popular characters all the time. Both are trained professionals in their field relying on their wits and skills. Both have cool gadgets and vehicles. Both work under secrecy. Both are ladies men etc, etc.

But the question that hits me is “what about the villains from both these character's respective fictional universe”? There’s quiet an amount of similarities between Bond villains and Batman villains. Sure, some of Batman’s villains have superpowers, but far from all of them do. And you could argue that some of Bond’s villains have superpowers of their own in a sense. Dr. No from Dr. No (1962) has crushing powers due to his powerful hand prostethics, Renard from The World is Not Enough (1999) is completely incapable of feeling pain due to the bullet wound through his head that permanently damaged his nervous system, Jaws from The Spy who Loved me (1977) and Moonraker (1979) is seemingly unkillable as he survives certain death after certain death.

Going back to Jaws, comparing this old popular Bond villain to a Batman villain such as Killer Croc. They both are henchman type villains who are both very huge and very strong. They both bear resemblance to a famously feared animal, and of course, they both have a thing for biting things. One over-arching difference between Bond villans and Batman villains of course is that Bond villains tend to have a lot more resources and work on a higher scale of villainy – being terrorists, or governmental operatives gone rogue or international, criminal masterminds - as opposed to Batman villains which are exclusively city outlaws, with Ra’s al Ghul as an exception of course.

Another difference is that Batman villains tend to all have a psychosis theme going on about them, which aren’t often seen among Bond villains. The ones I can think of having such a theme behind them is Raoul Silva from Skyfall (2012) - psychologically broken from being abandoned and left for dead by M, whom he saw as a mother figure - and Max Zorin from A View to a Kill (1985) - being psychologically unhinged from birth due to being the product of a biological experiment - and also, I think, Maximillian Largo from Never say Never again (1983, and yes, I'm talking about the non-canon Bond film) - acting like he's Italian when he's clearly Austrian.

I thought this should be enough to get some talk going on this funny, little topic.

So what are your thoughts? Can you come up with more similarities/differences between Bond villains and Batman villains? Would you perhaps like to see a crossover event with these characters take place in some fashion?

I’ll be expecting your comments below^^

Even the Daniel Craig version of Bond, who's supposed to be more realistic (especially in the first film), is a complete fantasy and probably closer to batman than any of the other Bonds in his manner, taciturnity, acrobatics and fighting abilities.

They're both male ideals- suave, powerful, competent, deadly, well built, good looking, attractive to beautiful women, they drive amazing cars, have exotic lives, their abilities and gadgets are incredible, and they're both quietly intelligent... People love that- Men and women and non-binary... It's not a type loved by all of course but it does have a hell of a lot of ardent fans. Bond is the slightly more "real life" version of batman in many ways. (though just as fantasy based really)

One big similarity is that they're characters that can only exist as a fictional trope- Real spies are nothing what so ever like Bond in any way at all... Even attempts to imagine a real life version are totally fictional like people's imagined idea that Bond was based on Christopher Lee (he wasn't), Lee was a young wannabe during the war who worked as a gobetween. After the war he massively exaggerated his war stories and was known for being a boor about it... /rant. Bruce Wayne is a representation of a billionaire vigilante one man army that can't exist. Both these things are wish fulfilment tropes that freely at home in fiction but have never existed in reality and can't.

How many Batman villains escaped from Arkham Asylum versus how many Bond villains were even in an asylum in the first place? Bond villains seem to be foreigners with different accents whereas Batman villains are citizens of Gotham. I am definitely #TeamBatmanVillains. Why? Mr. Freeze; Poison Ivy; Cat Woman; Penguin; and Two-Face.

@MOrgan - Yeah, well, now that you point that out what I really meant is that they were both experts in their respective field. And mentioning Dick Tracy, I actually looked up some youtube videos about Dick Tracy villains out of curiousity and you're right, they sure do have a lot more in common with Batman villains. Hell, from one of those vids I learned that one Dick Tracy villain called Haf n' Haf was pretty much a shameless ripoff of Two-face, although without the elaborate backstory, or the psychological chemistry or the flipping of a coin. Still, I like that there are so many of these villains in Dick Tracy's rooster and that they pretty much all have distinct deformities and traits that at least makes them each stand out in a way.

@HawkandFloAdventures - For most of em' that is the case indeed.

@jerrie - Me I'd like to see Bane go up against Mayday. She pretty much have superstrenght I just remembered.

Batman is not a professional, he is an amateur, he does not get paid to be a superhero. 007 on the other hand does get paid for being a spy. As for Batvillains it would probably be better to compare them to Dick Tracy villains as they have a lot more in common. I've heard Jaws might be a ripoff of a villain from the Destroyer book series, but I've only read the first book in that series which did not have that villain in it so I can't say if I believe it.

Well I actually feel Bond's villains perhaps have a lot more in common with Batman himself most of the time. Bond's villains tend to be eccentric Billionaires that own large corporations that want to change the world in their own image.

I'd like to see Batman fight Xenia Onatopp! And Bond get Catwoman!