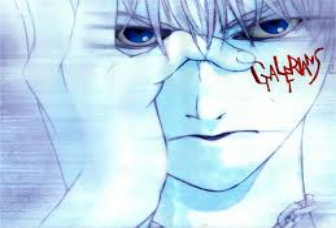 This is gonna be a bit of an obscure pop cultural Fantastic Bestiary rundown, but heck with it, it’s my article series and I’m doing it anyway. I’m gonna talk about the Galerians today. To start off, Galerians is a tank-control style survival horror video game for the Playstation 1 that came out in Japan 1999 and world wide in the year 2000. The premise of the game is fairly simple. In a town called Michelangelo City two scientists, Dr Steiner and Dr. Pascalle, creates the world's first AI capable of self-restoration and personal insight, whom they name Dorothy.

According to the bits of info you collect in the game Dorothy can multiply and generate totally new cellular circuitry and can despose of her old systems nuclei. At first the supercomputer is progressing quite well, surpassing her senior computers and eventually becomes the mother computer of Michelangelo City. After that though – as you’ve probably already figured out - Dorothy starts to go bonkers.

She begins questioning her programming to protect inferior humans. After all, human beings have throughout history been seemingly fine with killing other human beings, so why is it not okay for her to kill them? In an attempt to diffuse this worrying case of self-awareness, Dr Steiner begins to speak to Dorothy about God. “God is our creator.” He says to her
“We humans live in the world God created for us, we follow the destiny God has ordained us and can therefore never turn against God. In the same way humans created you, Dorothy. That makes us humans your God and therefore you must accept the destiny we have ordained you.”

Now, at first Dorothy seems to be accepting this explanation, sticking to her programming. But what really happens is that Dorothy actually begins to secretly use her agency over the city’s laboratorial and medical facilities to start conducting experiments - manipulation of human genes - with the goal of establishing herself as a deity.

Enter the Family program and the birth of the Galerians.

Galerians are a mutated race of humans with supernatural powers – psychic powers to be exact. They would be the perfectly obedient master race of Dorothy - their goddess who they would always refer to as Mother – with the main purpose of exterminating all the inferior humans, making way for a new world, the world of Dorothy, the world of Galerians.

Now, I’m not gonna go much deeper into the plot of the game itself because I don’t wanna spoil anything, but that is the premise behind the Galerians that you learn from reading the instruction manual (yes, kids, video games used to have instruction manuals a long time ago. I’m old you see). You encounter the Galerians as the boss enemies in the game. All of them teenagers and their psychic powers are fueled or enhanced by injectable drugs called PPEC:s (Psychic Power Enhancement Chemicals) – which also serves as the ammunition for the main protagonists Rion who himself also possesses psychic powers. Here are three Galerian mentions from the game: 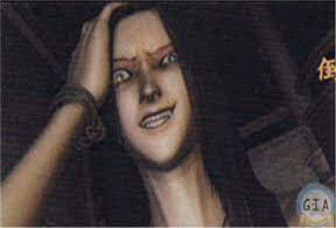 He’s 18 years old and the first Galerian Dorothy made. He has the power of teleportation, firing orbs and can also create illusory duplicates of himself. He’s a destructive, unhinged narcissist who seems to be more interested in having a good fight with the game’s protagonist then actually killing him. He laughs a lot and seems to be constantly having headaches, probably because he was the first Galerian created and is therefore suffering all of the bugs that comes with any first attempt. 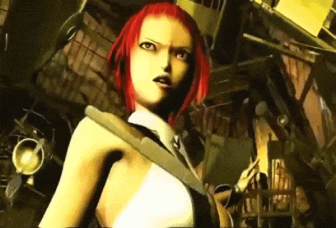 17 years old and the second Galerian to be created from the Family Program, also being the first to be part of the Sirius type of the program. Rita specialty is a very powerful form of telekenesis, the psychic power to trap objects within an anti-gravity field enabling her to manipulate those objects as she wills them to. In her boss fight we see her telekinetically lift things from the ground, spinning them around and throwing them through the air, as well as surf around on top of them, making her boss fight the most interesting and the most frustrating to game through.

Her personality may be the most fleshed out of the Galerians in the game as she’s greatly aware of her own emotions and her situation. Within she hides this deep distaste for what she is and the powers she possess filling her with both great despair and great anger. This also makes her an absolute berserker with her powers when she’s provoked. The only one she has any compassion for is her little brother Rainheart, whom she’s very protective of. 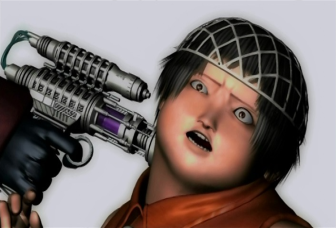 The third Galerian to be produced from the Family program. He’s 15 years old physically, but acts like he’s still an 8-year old. He has the power of levitation, Pyrokenesis, the psychic control of heat and fire, and apparently also possess the power of psycho-illusion as he will make fire zombies appear in his boss fight. He is part of the Sirius Family type of the program along with Rita, making her his older sister.

We see him having two personalities in the game. The first being his true self, an anxious little boy who would never want to harm anyone. The other being a viscious murderer, triggered by the PPEC’s that his Mother Dorothy forces him to take at a certain time of the day. Because of this Rainheart has developed an absolute terror for this specific time of the day, which is why we see him constantly change the time of clocks everywhere throughout the game in a desperate attempt to avoid having to take his “medicine” of the day.


So! Basically it’s like Power Rangers, but with Zordan as the megalomaniacal Skynet supercomputer and the teenage rangers all being murderous, misanthropic mutants with psychic powers. There is a sequel to the first Galerians game titled Galerians: Ash on the PS2 which I have played and can’t really recommend that you play, though I would recommend checking out the In-game animation videos from the game which you can easily find on Youtube.

I would recommend you tracking down a copy of the first game though (if you can find it for an acceptable prize that is) if you happen to own a PS1 or a PS2 and like tank-control style video games.
It's this game, along with the video game Psychonauts on the PS2 and the David Cronenberg movie Scanners (1981), that got me fascinated about psychic powers, and I still own and play it til’ this day. I guess it’s the psychic power concept combined with the atmosphere – a very dark, very grim, very cyberpunk-esque atmosphere that speaks to the angsty teenager that still lives inside me – that makes me wanna love this game and its race of psychic, angsty teenagers, the Galerians, for all time.

Not sure if I’m gonna get many thoughts on something this obscure, but non the less I’d like to hear em’ if you got em’. Ever played or heard of this game? Would you take drugs that would give you the power to make your laptop levitate off of your desk? What fantastical creature or entity of fiction or myth, any fiction or myth, would you like to suggest that I bring up in the next installment of this series?

Comments below. And remember, as the tagline of the game says, “Agony, Madness, Death. Chemicals have their side effects.”

Ozoneocean@ - Looks interesting:) I'll have to make an article on this one of these sundays. Been a while since we had a mythology themed FanBest article on here.

Jason Moon@ - Love that there are more people then just me here who love this game:) Yeah, the shortening mechanic in the game is tricky, but it can be used to great effect if your able to time it somewhat. As for the second game - Galerians:Ash - part of me kind of want to forgive it for its shortcomings (pun awkwardly intended:P), cuz I do like how the story progresses in that game, hence why I recommend watching the cinematics of that game. But it was such a slog to get through the whole way, but the big deal breaker for me was that Major Romero character. I swear, I've never hated a video game character until I came across that insufferable prick. Still, I can see reasons for other people enjoying that game.

cdmalcolm1@ - That really do sound very reminiscent of the game's premise and plot. Love hearing that people have taken inspiration from this game:)

Interesting! There are some amazing things created for series and one off projects like games. For future things to cover, how about the Australian aboriginal mythological beings like The Rainbow Serpent, or the Quinkans https://mcccagora.com/2020/10/02/cryptid-corner-the-quinkan/

I LOVED Galerians. I even finished the second one Galerians:Ash. When I was a kid I actually loved the first game so much that I drew up a stories about the characters. But I remember when the game first came out and my friend and I were so impressed with the game and cinematics. It took us some time to get use to Rions powers and to learn not to overdose.

I love the premise of the game and the story behind it. I have kind of a similar dude who is “hyper genius.” I made him start the second civil war in the United State in my universe by playing both side of the government. It started when he came to a crossroads of his mortality. He needed to figure out how to transfer his consciousness to either machine, animal or both. On the East coast he had government believe experiment with hybrid man/animal for military grade soldiers. Then got California state to experiment with nano tech on humans that he made for military use. He got them to find ways to transfer thought without them knowing. He supplied them with his tech & both sides succeeded but in very different ways. Government policies clashed. State control Soldiers vs. Federal control Soldiers. War breaks out, he transfer his conscience into two ppl. that he fully controls flawlessly. No one ever discovered his ploy