1. So the idea is that you sign up here to be part of this and submit your ONE or TWO page comic scene with your MAIN character in it (that's already drawn and been published on DD or somewhere else).
2. THEN we'll assign you someone else's scene.
3. Then you redraw that whole scene but with YOUR character replacing the original main character.

The exercise is for you to work out how your character would handle that unfamiliar sort of situation if they were facing it as well as adapting their outfit and hair to fit the setting so they fit in with it correctly: like if they were a time traveller and didn't want to look out of place.

DON'T make them go “Hey, where am I? what am I doing here?”. NO None of that fish out of water crap.
They have to act as if they ARE the natural main character in this new setting, as if they have always been there.

You guys will swap scenes to put your own characters in.
This order was achieved by random. I had myself in there even though the number was odd, but Ironically my number never came up :(

-edit-
Bravo has dropped out so I'm up!

What sort of timeframe are we looking at? I'm going to have to get a couple of pages up in order to participate. >_>

EDIT: Actually my first couple of pages are probably too slow moving to be useful for this anyway. :/ Still interested tho, if possible.
Tales of the unpredictable Chaos
last edited on June 7, 2016 12:24AM
link
Ozoneocean at 12:27AM, June 7, 2016

(online) posts: 28,325 joined: 1-2-2004
When (if) we get enough people to make it a thing then we'll just start assigning pages. :)
If this moves sow and we only have a couple of people participating then we'll start anyway. There doesn't have to be a huge group :)

Deciding on a scene will be tricky.

(offline) posts: 5,780 joined: 1-21-2008
So if I like submitted the opening of Tales of SIG where Aura arrives on the ship an example could be Oz having Pinky arrive on board the Starship Surprise?

Errr… are the swappings going to be randomly selected, or are y'all gonna try to mix up what would be the most potentially interesting/hilarious?!

@Irrevenant: No, just one or two pages with enough of a role there for the character to react/adapt to.
I'd say One page for preference.

(offline) posts: 5,780 joined: 1-21-2008
The single page could be the set up for a situation. Like beaming aboard a star ship or turning into a blind alley or any other easily adaptable situation a character could find his or her self in.

You could almost consider it like one of a scene improv piece like Second City or Whose Line is it Anyway?

Another example to use a recent page from Typical Strange: your character walks into the video store he/she works in and discovers it is closing what do they do?

(online) posts: 28,325 joined: 1-2-2004
Yeah.
My thinking is that In order to make it fun and doable that would don't fork over too much work onto people- redrawing one page isn't so hard. They could take on more if they wanted.

Tonight I'm ill with a cold and too tried to think cleverly.

(online) posts: 28,325 joined: 1-2-2004
Still sick with a cold but I randomly assigned partners. :)
I had myself included but my number never came up…
I might have to wait for someone else to come along.

(online) posts: 3,342 joined: 2-24-2007
You could have done it more like the secret santa to allow for the odd number. Like, instead of pairs, character B in A scene, Character C in B scene, A in D scene, etc. Might make things more interesting.

This will work too, but you shouldn't be left out. :-P

(online) posts: 28,325 joined: 1-2-2004
Hmm, we can do that next time. I though of that but then I wanted to know how a straight swap switcheroo would work so the viewer can directly compare how things change, you know?
Bravo dropped out and graciously gave me a space so it's me Vs Ashtree now.

And we can always mix this up and have multiple shots at the idea if we're inclined. Especially if it's just one page scenes- they're already plotted out and drawn so it's way less effort to draw them than it is to create from scratch.

(online) posts: 3,342 joined: 2-24-2007
Another interesting idea (maybe for the future) is to have the other person pick the scene. Like, “Oh, my character would do that differently.”

The direct trade will be neat. :) Just pinning up some other ideas as they come to me. (So they don't vanish into oblivion.)

(offline) posts: 5,780 joined: 1-21-2008
I am sorry for any misunderstanding, but I only ever intended to explain the idea clearly, not to participate. Besides I don't have any applicable recurring characters or scenes worth anyone redoing.

What's due in the next two weeks? The initial scenes or the redrawn versions?
Tales of the unpredictable Chaos
link
Ozoneocean at 9:35PM, June 17, 2016

What's due in the next two weeks? The initial scenes or the redrawn versions?

The re-draws, but if you can't get a scene ready in time, just have a word with Usedbooks and you two can talk about what to do.
There's no penalty for breaking any deadlines here. It's just an arbitrary number to encourage people to start :)

(online) posts: 795 joined: 5-15-2012
My swappee never responded to my PQs, so no scene-swapping has occurred for me, and now some RL stuff has came up so if I do get a response it's gonna be delayed…

The writing exercise is really fun. It's much the same process as normal script writing. Character in a scenario -> reaction. Someone else's scenario makes it more interesting.(It makes me want to insert my characters in everyone's stories. I have a feeling they'd get killed off at least half the time.)

I scripted out everything too and I was making good headway. And then I realised I had no idea how to draw panel 1, page 2. xO I'm kinda tempted to work around it and come back to it later…
Tales of the unpredictable Chaos
link
usedbooks at 9:41PM, July 12, 2016

(online) posts: 3,342 joined: 2-24-2007
I have only half done, but it's going to be a while before I can get onto the second page. (Fitting in time between working on UB updates.) I figured I'd post what I have and keep this thread moving.

Irrevenant provided this scene from Tales of the Unpredictable Chaos: 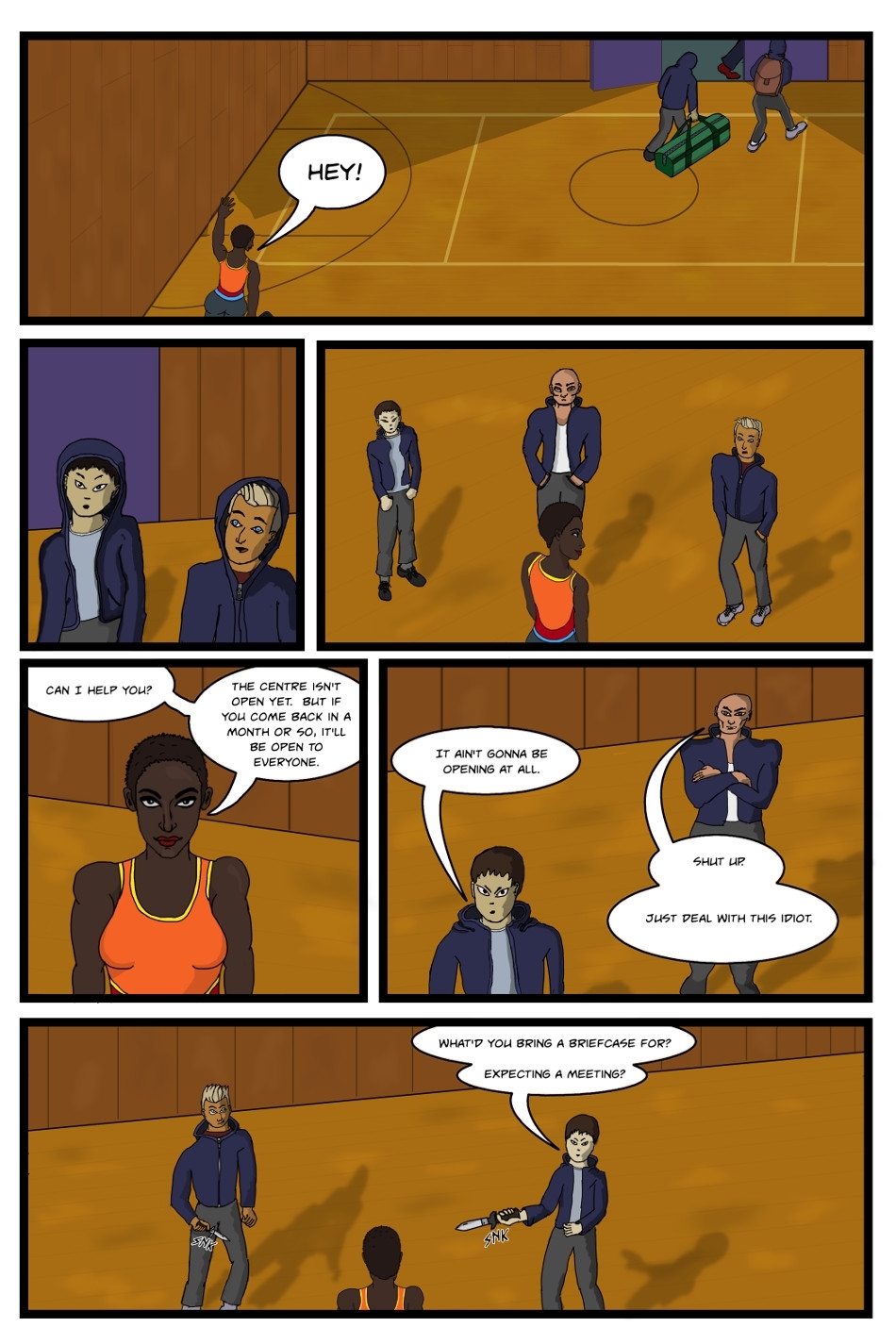 I inserted Seiko from Used Books, a fair protagonist with pretty much zero physical prowess. – It took me an embarrassingly long time to come up with how she could/would react to the situation. In her native comic, “bad guys” rarely see her as enough of a threat to initiate this type of confrontation. 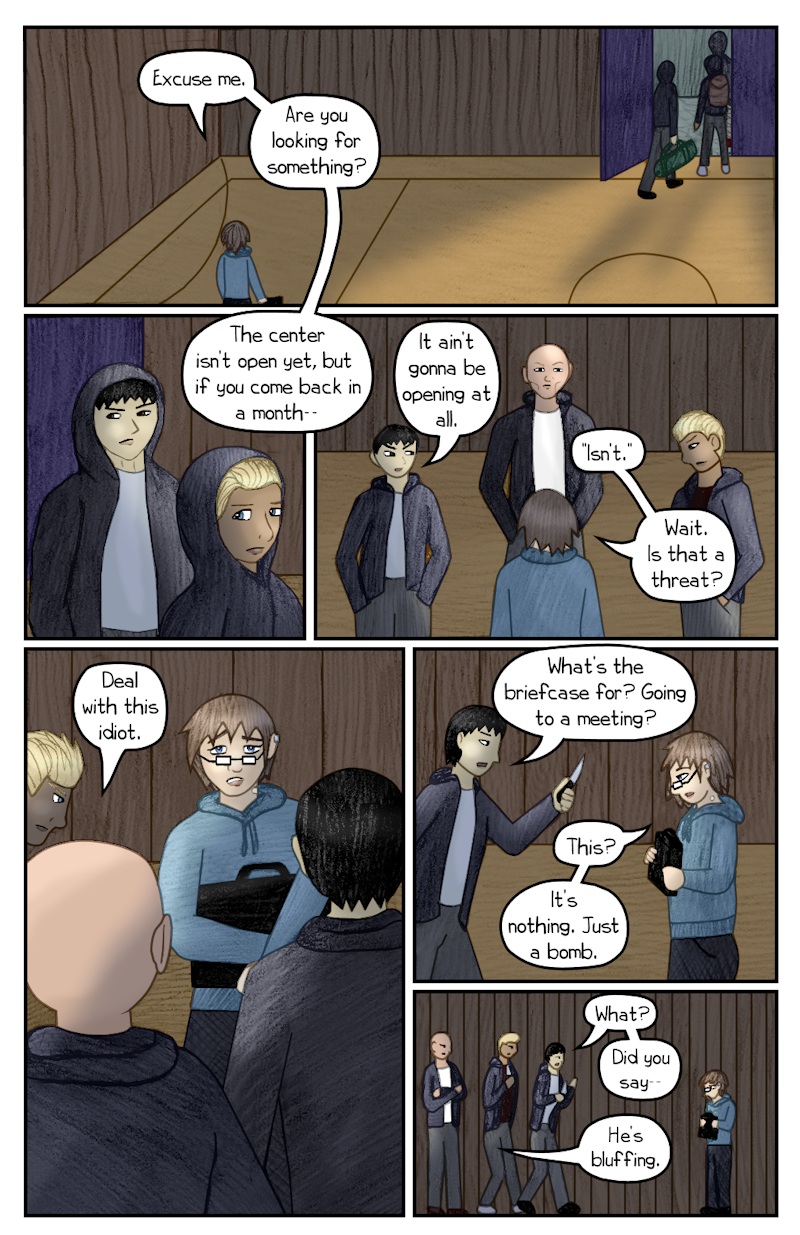 I'll get the next page done when I can.