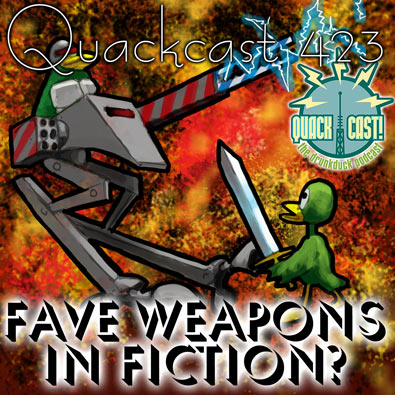 What's your favourite weapon in fiction?
Mine are ridiculously giant swords, huge anti-tank rifles, and mecha. There are a lot of complex reasons for weapon choices in fiction, a Kalashnikov assault rifles for example signals certain things about the person carrying it: They're usually a bad guy for a start. This originated during the cold war, with certain types of bad guys using AKs. First it was Soviet Bloc soldiers, then it was Viet Con and rebels from South East Asia, then it became the “terrorist” weapon. The sub machine gun is the weapon of the bad guy. Terrorists used to use Uzis (before they turned to AKs), bank robbers used to use Mac 10s, now it's the HK MP5. Good guys carry an M-16 or AR-15 rifle. In historical fiction traditionally the bad guys carries curved swords while the good guys had straight swords, this came from crusades. Minor characters carry spears and heroes carry swords. Women, weaker characters and rebels carry bows. Giant swords and guns are often given to smaller characters in anime (usually female), as an obvious contrast with their small size. It's meant to emphasis the fact they're sort of a “mighty mouse”.

Weapons technology can also be used to signal things about the society using them. In fiction the Nazis are highly mechanised, with their huge Tiger tanks, sleek half-tracks, and fighter panes. It shows a ruthlessly efficient fascist state with the power of high technology on their side. The Empire in Star Wars was directly influenced by them. In reality the Nazi forces were largely horse drawn, their air-force was limited and they had very, very few tiger tanks. But they lent us the “empire” trope where the bad guys have better weapons and the goodies have to beat them with pluck and improvised tactics, as in Avatar.

So what are your fave weapons in fiction and why do you think they're used in stories?

This week Gunwallace has given us the theme to Bottomless Waitress. This is such a happy sounding, Southern, joyful track, filled with banjo and layers of guitar, twanging away… bringing notes of sunshine, natural wood, the light glinting softly through tree leaves and making dappled shadows on the ground… Perfect for an advertising jingle!:
Slip into a comfy booth, get your butt comfortable on our soft cushions, and enjoy a plate of down-home cook’n in this fine establishment, filled with a cast of friendly ladies. Try a plate of our famous bottomless fries, a cup of our delicious bottomless coffee, and the sight of our lovely bottomless waitresses!