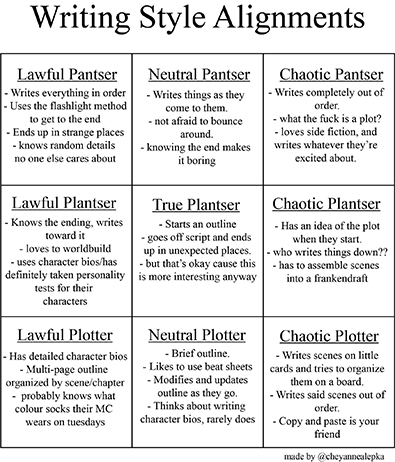 Some time ago I found this writer alignment chart on Twitter, (or maybe it was Facebook?). As a casual player of DnD I found this very amusing and began to spread the meme around and was pleasantly surprised by the results.

Myself? I am a True Plantser. Most of my stories start with an outline but try as I might, I always find myself off script. Sometimes it is more egregious than other times. It really depends on characters. I have always believed that despite all the well laid plans you might have, the characters, once they have gained a mind of their own, will eventually defy you. But if you’re willing to roll with it and listen to their pleas, it can provide interesting results.

Of course, you can come down on them with your righteous anger yelling, “This is your fate!”

There are some stories though, where I take a Neutral Plotter approach. These stories tend to be done on the fly because the scope of the project allows for that freedom of movement. The outline is there but the details can be a bit lacking. Usually that is because the characters have hijacked the train.

What is your writing alignment? Let us know in the comment section below! And join us on Sunday evening for our Quackchat at 5:30PM(EST)!

This is interesting. I start out in my head as Chaotic Plaster then moves to Chaotic Pantser or Neutral Pantser,(depending on the story). However, When I start to write, i jump to Lawful Plantser based on the outline in my head. I create keystone outlines about whats going to happen so i don't forget. Writing the script leading to those keys is what makes me excited to write.

Depending on the story I switch types fairly often, sometimes even halfway through, but I admit I do have a strong tendency to the three on the top right.

Nice chart. I'm not sure where I fit on it, as I've tried multiple approaches with my writing and usually just gotten stuck and/or lost interest. The webcomic I have on this site was historically whatever I thought up when making a given strip (as it's really a drawing/lettering exercise) but now is done from a written script... which is basically the same thing except now I know what's going in the panels before I start drawing. I write it in order, but that's as far as I go with "lawfulness". [pretend there's a paragraph break here] A nitpick (to whoever created this): if you're not using the word "neutral" for the middle row, you don't have to avoid it for the equivalent of "True Neutral". There's no obvious reason for the phrasing of the original D&D term except to avoid the awkward *"Neutral Neutral". PS -- some piece of software is removing line breaks from my comment. It's meant to be two paragraphs.

This is hilarious, I love it. I'm another True Plantser, though sometimes definitely a Neutral Plotter!

I think I’m a Lawful Plantser AND a True Plantser...and sometimes, maaaybe a Chaotic one, because I don’t write scenes down, though I do usually plan them at least roughly ahead of time

Neutral Panster but with lawful tendencies, as I do, mostly, write in order. I have a vague idea of the end, but nothing firm, as I like the characters to 'tell' me how it ends. So Lawful-Neutral Panster who hears voices in their head?

Neutral to chaotic plotter. I did one story as a lawful plotter.

Lawful Pantser. The more I write, the more it's like I can look behind the curtain of plot and recognize that fiction has a finite number of plot variants. Characters and settings can be unique. The goal is build compelling characters, put them into an interesting place, and keep them motivated to work towards the ultimate ending. The ending may change a bit as I go, but if I don't have some sense of where the story is going, I have a very difficult time continuing to write.

Slide back and forth between lawful and true plantser but I guess it also depends on the story.....I've answered personality test questions as my characters.. I have the ending written I know who the hero real ends up being in the main plot. And how they get there. . but am ok with side trips...Lan and warmwind often direct the way the story goes .but .if you find my ink bunny stuff you have found the random and out of order. Pages done just cus I need the energy of that page need something only lan and warmwind can give and that means stepping out of the story...and how to be homeless has no plot its chaotic.. pages cover everything from what it feels like when I get depressed and suicidal.... to sleeping in public place and what's on my play list.. so if we look at everything then pure chaotic plantser..

Unfortunately, I am too chaotic for cards to organize my script segments. I have them on spiral notebooks, looseleaf paper, margins of menus, word documents, notepad app on my phone, emails to myself... Frequently lose them and have to rewrite.

I am the Chaotic Plotter.

I am definitely Lawful Panster

I think I WANT to be a Lawful Planster, but I'm really a True Planster. I know the ending, and the goals for characters. I know what I want them to evolve into, but I'm always altering the steps in-between. Maybe if I was doing something that was either shorter, or I could complete in a shorter amount of time I'd be more of Lawful Planster. I just find that it's hard to plan too much too far ahead, by the the time you've gotten the comic to certain points, you'll have a different opinion about certain details.