Talking about your comic to others (and why you should) 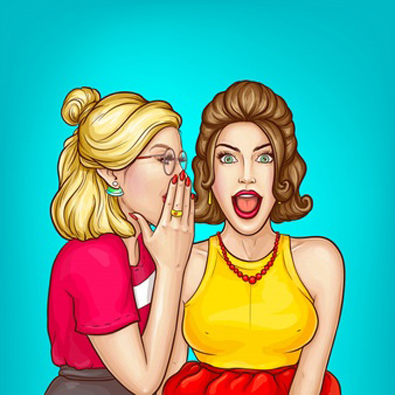 You have a comic! You love it! You think it's amazing! But when faced with explaining it to other people outside of the webcomicshpere, you feel yourself deferring, prefer instead to shuffle your work under the rug, hoping that you don’t find yourself looking too weird. At least, that is something I struggle with all the time.

I came to notice it last year when my partner and I were overseas for a spell and we stayed with some really nice people for a couple of weeks. When asked what I do, I deferred and merely gave my job title as a graphic designer, not even daring to admit that I draw comics as well. A few days later, my partner actually began talking about them to other people. I only found out that he had done this when they actually came up to me and asked, to my horror, to actually ready my comic!

On one hand I was very flattered and heartened by the amount of faith my partner has in my work, but on the other I was dying on the spot. The idea that my super, secret double life would be revealed to people I barely knew made me unbearably awkward inside.

But here’s the thing. When I finally began to talk about it and why it is I make comics, the enthusiasm was hard to hide. I was excited to talk about it in the end and lo and behold, those people were, in turn, excited to read the comics I was drawing. They even began exploring others on the sites we hosted on and thus, we inducted more people into the fold.

Talking about your comics is hard to do, because being dismissed is a difficult pill to swallow. I know. I’ve been there. And with every dismissal, it has made me more and more nervous about talking about them. However, when I pushed passed that and tapped into the feeling of why I draw comics, talking about the work itself became easier.

So if you are struggling to talk about drawing comics with others, try and approach it as why you draw comics. Your enthusiasm will get them excited about checking out not yours but other people’s works too!

How have your experiences with talking to others about your comics gone? Let us know in the comment section below! And join us on Sunday evening for our Quackchat at 5:30PM(EST)!

Yeah... do an adult comic and there's practically no one you can tell about it. I once told an old friend I hadn't talked to in years about it, and I was telling some of the things that appear in it and his reaction was, "Oh. If that's what you're into..." and I had to explain that it's comedy, not my fetish/fantasies.

I only translate a comic, and in the beginning I had problems talking about that, especially since said comic contains porn. Not just nude people (which aren't that much of a problem in germany), but explicit sex scenes. You can't just walk up to people and say 'here. read my comic'. Next thing you know you're about to get sued for sexual harassment. But almost everyone I know is pretty open minded so over the last year I told more and more people about the comic. Most of them liked it, some told me it's not their cup of coffee, some even loved it. Now even my parents and siblings (all adults!) know about it.

As DaniBoy says, negative reception isn't bad, the bad thing is having no feedback at all. I think one problem (I'm not sure if it's the MAIN Problem) but people around me see comics as a "child thing"...

What kinda sucks about the negative reception, aside from the things I mentioned, I never get good feedback on why. They just say "I didn't like it." Super useless info.

When it comes to generally telling people I draw comics it's not a problem, explaining the premise if the story is always tough. Half the time I get people who seem interested, asking to read it, but once they do it's hardly ever well received. Mostly due to the dark nature of the content, or because they don't understand the mental health stuff, or it has queer characters in it(A lot of the people I'm around are religious). Despite always giving very clear warnings that it's has heavy themes people on the outside always assume the comic is going to be something like an edgy gag-a-day comedy or something. Because of the poor reception I've grown very stingy about letting people read my webcomic, my "pitch" is very blunt "this isn't a happy comic, it has a lot of bad stuff in it, you won't like it", if they still insist I'll send them a link. I think the only two people who've claimed to like it was my psychologist/therapist, and one of the Dutch pilots I work with.

Once in awhile, the fact that I do comics pops out - I don't go out of my way to share it. I don't feel the desire to have my 'outside' friends and family look at what I'm doing. When they ask I usually just say "Oh yeah, I'm still doing them! Here and there - slowly!" But you mentioned the investment and excitement we have in making comics - the hidden excitement will sometimes burst out and I'll start chattering away enthusiastically about them. Then I fear I'll never stop talking!

Ha, even my friends and acquaintances who are into comics have no interest in anything I've ever done. Then my family totally dissing and dismissing them? It's really not worth mentioning it to anyone anymore. Not self deprecation, just hard experience. I have to sit through long discourses on other people's interests and I bring up my comics and the subject is changed very quickly.

It also helps to make up and carry "business cards" with info on your comic and where to find it that you can hand out to people you talk to about it.

Good idea about the enthusiasm! It's always so hard to chat about your work with strangers...

I ALWAYS feel weird trying to talk about my comics to others who arent doing comics themselves. A lot of my associates think I'm a friggin whacko.