QUACKCAST 485 - For your eyes only 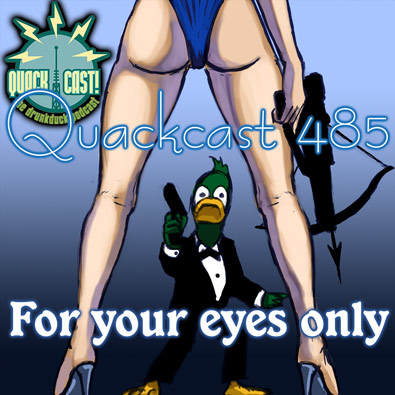 This week Gunwallace has given us the theme to Pious: Glide into white sepucheral stillness and venerate at the holy altar in the glowing light of purity as it shines down from the heavenly firmament high above… or worship in a far more Earthly fashion with an angel in red latex and leather wings…


Banes Newspost on the topic! - https://www.theduckwebcomics.com/news/2020/jun/01/what-if-nobody-ever-sees-it/

Hahaha, he was a very smart man then XD

@Ozone: Yes, he did seem to think the sun shone out of his arse.

@Gunwallace Were other other Bonds? I wasn't aware because the bright light of the supernova that was Moore outshone them all ^_^

@ozoneocean - Oh, that is totally what I'm doing😁 Its just not in the same format it used to be^^ The problem with the old format was that it was fun, it was a fun smutty comedy, but it didn't feel quite clever enough for me. I want the things I create, even my smutty ideas, to have an element of cleverness to them, to make them interesting as well as entertaining. Something that sort of turns you (or at the very least me) on in more then one way, if you catch my drift😜

Thanks Banes! :D Inspired by the best Bond ever: Roger Moore

Hahahaha, Skreeeeeeeeeem! You're the master.

Why would anyone put hours of work into something and then delete it. Crazzzzzzzzeee.

I still have the analouge-drawn pages of this porn superhero comic series I once began and never finnished, tucked away in a folder somewhere. In its original form the idea would never see the light of day. However--I have over time developed a format through which the scenes and ideas from that comic can be reinvented and showcased to an audience. I can definitely relate to having all of ones ideas, past and present, conform to this finalized vision. That's what's been happening to me recently. I've currently put my current comics on a definite hiatus, up until the end of summer, and I'm going to use that time to sort of reinvent my comics. The overall stories themselves, as they've been told so far, will remain mostly the same, but the setting, the style, title names and some parts of the character designs will be somewhat different. It really feels to me now like a last farewell of the old, random idea hatching days, which feels like a great gain and a great loss at the same time.