Archetypes Through a Psych Lens: Humanistic

The last of the “big four” personality theories is that of the Humanistic school of thought.

I usually only pick one of the big contributors in each of the major schools of thought to give you the gist of the approach, but for this one I want to include two, because I think they complement each other really well in how they explain how human personality develops and what factors play a major role in that development.

Don't worry, I'll do it in two articles. I'm not that cruel.

The ones I'm going to talk about are, as you might have guessed from the gif, Abraham Maslow and Carl Rogers. 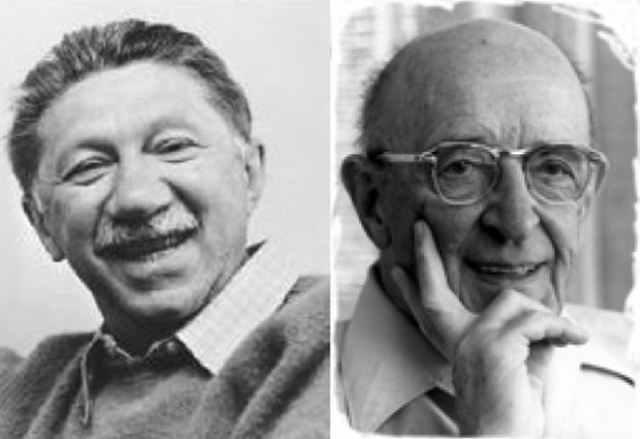 Maslow on the left, Rogers on the right

Carl Rogers built on Maslow's frigging amazing theory, so I will start with Maslow and his famous theory of Hierarchy of Needs.

According to Maslow, we are shaped by our needs, and these needs are what motivates us to do, and become, anything.

The needs have a hierarchy, in that certain needs must be fulfilled first before the individual feels any other ones.

He arranged the basic needs of an individual in a pyramid, now pretty ubiquitous and famous: The lower the tier in which the need is categorized, the higher the priority it has for satisfaction before the person can move on and become motivated to fulfill a need in a higher tier.

That means that, if, for example, you are a little hungry, you may not want to risk stealing the dopperman's food from his bowl. But if you become hungry enough, you won't have a need for safety or a need for taste or a need (potentially) for dignity, and you will risk the dopperman to get to his food.

Which brings us to another point: you don't have to have a need being FULLY met to get to the next tier. But you must have it met at least a bit. How little a need has to be met in order for the individual to move on to the next tier varies BUT his/her behavior will be affected by all unfulfilled needs in various, often complex, ways as he/she interacts with the environment.

Lastly, all the needs from the Self Esteem tier and below are “Deficiency Needs”: the bigger the lack of satisfaction, the stronger the need is felt (e.g. the longer you don't receive food, the hungrier you feel). The needs above the Self Esteem tier are “Growth Needs” which means they become stronger the more you satisfy them (e.g. the more knowledge you have, the more you want to learn).

How does that factor into personality?

For Maslow, our personality never truly manifests or blooms unless we satisfy all our needs and reach the top tier, or Self Actualization: the state where our personal growth and self discovery is our key motivator and major need (and which, according to him, very few of us ever reach).

If you are building your character based on the humanistic perspective, I'd advise you to wait until I've talked about Rogers. But if you only base the OC on Maslow's Hierarchy of Needs, then you will need to answer the following questions:

1. What needs has the character currently satisfied, and to which extent? –> which tier does he/she place at?
2. How pressing are the needs he/she has? How does he/she go about satisfying them?
3. Who/What does he/she depend on to keep his/her needs satisfied?
4. If all his/her needs were satisfied, what would he/she want/need in the Self Actualization tier?
5. Which deficiency need was the most prominent while he/she was growing up? How does this affect him/her now?

Using Maslow is a great tool to build a character in such a way that they are already integrated organically within the setting you are creating for them, since you will be building them alongside it, and with it as a frame of reference.

Again, the usual disclaimer applies. I invite you to read up further on this theory (which Maslow kept refining virtually until he died, and others then picked up the torch) but make sure you apply it with prudence on yourself.

I know I've been a fairly regular dissenting voice with a number of psychological theories, but I do think that the hierarchy of needs is a much simpler way to look at things, and I think most writers would probably be able to do it more easily, to shape their characters and those characters' motivations. In any case, I'm glad you've worked so hard to present these various theories to us. You've written masterfully (of course, since you're an expert on these studies!) and I'm very grateful that now, more people here at the Duck have many different options to understand their characters better as real people. Thank you for all of your work!

I agree on everything you said Paul! And I'm so glad you've pointed it all out. That was the purpose behind this series (two posts in it left!). Personally I'm very much a Bronfenbrenner + Maslow/Rogers cognitive approach psychologist, more inclined to look at things holistically (as social psychology tends to do) so I totally believe that interactions within and in between the individual and society are more important than anything that can be ascribed to predisposition (i.e. temperament, etc) without implying that knowing about temperament and trait theories is unnecessary. I'll be talking about that in my last article on this series :D

Last week, there was an article by Emma_Clare about building stakes, where she also wrote about internal stakes. This ties in nicely with the topic at hand, as Maslow's pyramid can help figuring out how to make them high enough to be interesting. It can also help explaining how the stakes for characters can be quite high even if from an objective point of view they're not. If you don't believe this can work, read any Wooster & Jeeves story by P.G. Wodehouse - he was a master of building this kind of stake on what Maslow would file under psychological needs.

Another great and very educational post! Unfortunately, the 3rd image doesn't load, but the article is still great. For some reason I've never fully realised before how much psychology basics for character creation parallel the psychology basics needed for teaching (respectively, how useful it can be for making comics), although it makes perfect sense, since both are very much about developing characters at various stages. This perception might be a cognitive bias on my part, of course, but if you move on at some point to social psychology like, say, intergroup conflicts according to Sherif or Mead's role theory I may start believing it. ;) Anyway, it's a great opportunity for me to brush up on all of this again.