Character Design Brainstorm: The Man (or Woman) of the Cloth

There are many tropes and many archetypes that we use for character designs. I had a couple of years go (have I really been at it this long!?) done a series of articles on the standard character type/functionality archetypes.

I'm thinking it's high time to explore archetypes in class, category, or specifications rather than personality or functionality in the story.

And what better way to start than with the Man (or Woman) of the Cloth?

A person of the cloth can be anything from a deacon to a patriarch, a novice nun to a mother superior, an initiate templar to a master templar, a druid or a voodoo priestess- the main and most important thing is that they are members and active practitioners of an established religion.

People of the cloth come in some standard versions:

They may be actual believers

Or they may be skeptics

Or, they may be master manipulators, using religion for their own benefit without any faith or belief 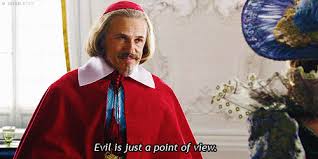 Or they may just BE the devil, or have some kind of juicy pact with it.

It may make them go rogue, bucking the established hierarchy or system of religion they are in, or try to ascend the ladder like in a corporate dog eat dog world. They may have many faces, or they may try to withdraw from the world or their peers.

It also isn't necessary for what their true colors are to immediately show OR stay the same: a priest might come across as insolent and audacious and actually be pious and a true believer, and the reverse. Or, they may start off being skeptics or non-believers and end up being believers and vice versa.

The priest is important as a character type because they command authority no matter what their religion, era, type, or look. From cleric to televangelist to shaman, people will look to them for guidance, comfort or even the miracle they desperately need.

Whether a main character or a side character, they will be a presence- or, if they have no presence, that too will make a statement for either your character or the world they are in.

Have you had a man/woman of the cloth in your story?

I have the basis of a story, and the main characters are members of a shamanic faith that can draw power from their Gods and totems (and have learned to draw power from other peoples belief in themselves) The thing is, they follow their faith to protect innocents, and see no wrong with offering up people they would have to kill anyway to demons as part of deals to get their work done. Nor do they mind working with one evil group against another, or even a goodly group that is doing too much harm that the group doesn't admit to themselves. They also only call on their gods and totems when needed, and prefer to use arcane magic instead, in order to not drain their Gods, saving their power for more important things. Their leader is always the best student of the last leader, and they have only two benifiets: 1) carry an relic from their founder and 2) declare interdimensional warfare in a very specific circumstance.

Cool article! I love some characters like this, I feel like the bishop from the Zorro movies was a really fun example of a believer. My comic is about a lot of different people (or at least it will be in the future) but one family in the story is devoutly Christian, the young lady of the house in particular being someone of strong influence on others, so maybe she counts as a “person of the cloth“ without being an actual priest or anything. I really enjoy showing more “logical” viewpoints alongside faith-based ones for variety and a good balance.

What a great article!!! I’ve enjoyed a little religion in my Drako the Barbarian comix; dealing with various religious fanatics and beliefs. As far as movies, one of my favorite men of the cloth was the Templar, Hospitaler's character played by David Thewlis in “Kingdom of Heaven” (2005) calming Balian de Ibelin (Orlando Bloom) in his self doubt about his faith. Although Hospitaler was a Templar, he wasn’t drinking the coolaid of that group, or how the Templars were portrayed in this movie.

I should watch that Joan of Arc movie again. Big inspiration for one of my characters. My man of the cloth character is based off a drunkard priest whose lost his faith from the show House MD. Everyone approaches religion differently, and every religious person has their own goals, from maintaining social structures, repressing ones own undesirable personality traits, to genuine charity. It's not religion that makes them do things, they're doing the things and using religion as a framework or justification.

My favorite is Friar Tuck. The priest from Trigun was cool too.

The movie Eric the Red had a lot of fun with belief. Where they go to Valhalla and meet the Norse gods and the token Christian sees nothing and wonders who they are talking to.

Frollo is an excellent example which I forgot! He actually is a believer on the surface, but a hypocrite. Great stuff.

A good example is Frollo from Hunchback of Notre Dam, so very complex.