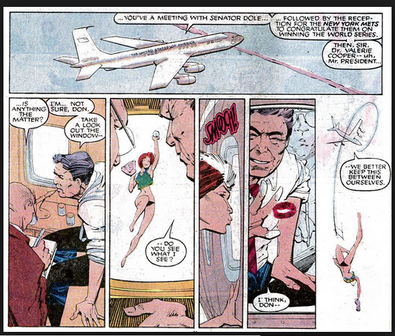 Rogue from the X-Men encounters President Ronald Reagan!
(…who???)

Some comics are very much “of the moment”, while others are more timeless.

Connecting to the events of the moment can be a worthy endeavor. Webcomics are well suited to this kind of approach, too, with our ability to create and instantly distribute our pages. South Park manages to do animated shows very quickly, delivering commentary on current events with less turnaround than most shows, especially animated shows.

On the other end of the spectrum would be comics or series that make no mention of current events, and do not seem to exist at any specific point in time (or exist in a time outside of the contemporary, like a fantasy world or a futuristic scifi setting).

The parody films by Seltzer and Hamburg (or whatever their names are) are sort of famous for the lame pop-culture references/jokes that are just a little bit too old to be relevant.

On the other hand, when I've watched old Daily Show or Colbert Report episodes, they often hold up. The self importance and hypocrisy of the powerful and the insincerity of politicians is eternal. Plenty of political discussion or comedy shows DON'T hold up so well, because there's not a larger point of view behind them.

Then there's the problem of technology - things are moving so damn fast; the long-running tropes we always see in movies, shows and comics have got to change to relate to modern audiences.

It can be distracting to revisit old comics or series and catch old pop culture references or dated technology. They usually take me out of the story. Anything that was cool or meaningful about shallow references is now completely meaningless, and exposes the true holes in the thing.

Unless it's a GREAT story, that is. Chris Claremont's X-Men is always great, no matter how “dated” some parts of the stories are. Let alone Asimov, Mark Twain, and others.

A great story that doesn't use its place in time as a crutch is timely AND timeless.

Or maybe I just made that up. I like the sound of it, though…

I prefer stories that don't announce a year too prominently. It's just creating a built-in expiry date. Of course, this doesn't apply to period pieces, or far-future pieces (at least, it doesn't apply yet. I'm looking at you, old dystopian stories set in the 90's!

Of course, what really matters is the truth within the story, to whatever degree the story needs to work. Is there real humanity in there, regardless of the time period it was written?

Are your stories timely, timeless, or somewhere in between? Do you have a preference on this with the stuff you read or watch?


see you next time!

I am watching GATTACA right now and in the first ten minutes, Pluto was referenced as a planet. Waa waa.

I tend to make a wild anachronistic mix of old and new things, myself. The main reason is that I choose props according to what kind of things I feel like drawing at the time, and I happen to like old stuff. When drawing Master the Tiger, which is set in whatever year you happen to read it, I realised at an early point how this makes it more or less impossible to fix it to a year or even a decade, so it became a conscious style element over the years.

The problem with timeless works is that you won't know they are until some time has passed. For instance, in the 1950s political correctness was a thing, too, but it meant something completely different than today, meaning that little jokes and (then) innocent throwaway lines by characters can betray the age of anything instantly. However, it only really matters when there is a lot of them. Also, when I read old science fiction I sometimes mentally replace the planet names Mars and Venus with some other name, and voilà: the story is as good as new. Some of the old authors suggested to imagine their stories play in a parallel universe of something (e.g. Joe Haldeman in his 1997 introduction to "The Forever War", which is a timeless science-fiction treatment of the Vietnam war set in 1996 where there is an interstellar war). I guess timelessness is also a bit about how we readers approach it.

That said though, this retro-future standard only applies to the continent that all of my comics take place in, namely antarctica. Everyhere else in the world people have moved on with tech, which makes for some rather fascinating culture-clashes between antarcticans and the foreigners coming to the continent from abroad.

The common everyday tech of my comic universe is admittedly very pre-2000's and cultural style is kind of all over the place to be honest. Not trying to make a period piece in any shape or form, my comics are set in the future, the very next century to be exact. It's more, partially, because the creator (that's me) have problems relating to contemporary tech and culture and would rather have this fictional world where things like VHS:s tapes and stationary phones stayed on vogue. And it is also partially because this is meant to be a alternative sort of retro-future with a "what if tech and culture never quite catched up to where it is now in the real world and what, within the context of the world and the way it functions, would advance in its place".

I remember two media items that I liked a lot although they were weird because surpassed by time: the Shadowrun RPG manual, that had a future history that still relied on the USSR (I bought it after the collpse of the USSR); Patlabor the movie (1), a very cool sci-fi movie IMO but they made it in 1989 and it was set in 1999, I probably watched it around 1996 so it was already quite weird. Also I remember that before the year 2000 everything that was set after the year 2000 was supposed to be super futuristic.

Really interesting news post. The time period and technology in my {future} projects aren't set in stone, but I made a flip smartphone product that my characters can use (with a physical keyboard and a "slide" mode in case they'd like their phones act like a be a slide phone). That way it can look 'in-between' when it comes to timelessness.

One way I got around this is the technology in the future in my comics are physical digital holograms. That merely take the appearance of old tech because people like the aesthetic, it's true to life it looks nostalgic and it doesn't date anything. In fact it makes me realise how much more we have yet to accomplish as a species.

When I wrote "Girlsquad X" in the early 90s, I deliberately crammed it full of vapid superficial pop-culture references that could only be meaningful during roughly the years 1990-1992. It was my intention that the comic would become embarrassingly dated and irrelevant within a scant few years of its publication.

I remember watching a Saturday Night Live rerun about 10-15 years after it originally aired. The really sad thing was that the political jokes were still valid, you just had to substitute a current politician name for the old politician named. Sometimes the more things change the more they stay the same.

If it's a situation like bravo1102 mentioned, a reference can be handled in a timeless way. Rogue seemingly endorsing the hideous, hateful goblin above was a super cringe misstep that they thought (incorrectly) would be cute, but it comes out of nowhere and doesn't make any sense to an audience removed even slightly from its frame of reference. It can sometimes end up putting things in a different perspective, though. Recently I watched Wrongfully Accused, a parody of the 90s film remake of The Fugitive. A number of its references of the day were lost in terms of the specifics, but it ended up making the overall work seem better because the larger mechanism was accessible and easy to engage with. It's hard to tell when things will age well, or not well at all. Best to just focus on writing a compelling story, then anyone anytime can enjoy that part of it.

You mean like the 1970s classic Soylent Green taking place in 2022? Or Marty McFly visiting the far future of of October 2015? As a history buff I find the current events references of old shows very funny. I'll occasionally go research them if I don't remember the reference. Recently I've been listening to radio shows of the 1940-50s. Some of the references are timeless, but dropped names can be obscure this many years later and the special guest stars are movie icons of another age. Like a whole routine about Ann Sheridan as the umpf girl. Its a universal concept, the person who is irresistible. Therefore it still works even though the actual names are obscure.