Pets are intimate companions that get us through the day. Cats, dogs, rabbits, rats, snakes, fish, you name it- they help us in their own way. And yet not many characters in fiction or comics tend to have them. I for one don't include animals at all in my comics if I can help it.

It's not just that perhaps they are tough to draw (that can change with practice). It's that they are a silent character that might not help the plot or might highjack it into something that isn't the original concept or author intent: an animal that is too clever in human ways might disrupt suspension of disbelief in a mostly realistic story (or at least shooting for realism). Or an animal might get scenes that hurt the plot's pacing.

On the other hand, animals in comics and other visual mediums can be a great way for showing sides of the character that otherwise wouldn't easily manifest. Tintin had his dog Milou because without the interaction with the dog, he would have nobody to talk to for a lot of the stories before Captain Haddock was introduced. Milou is also a great way for commentary to be run on a range of situations, including bewilderment or indignation at what is happening, as well as a source for humor or comedy without disrupting the plot.

The great thing about how Herge handles a character with a pet (especially towards the later books) is that while we read what Milou is thinking or saying, Tintin doesn't, because Milou is a (very intelligent, very well trained) dog, not a magical dog. This almost makes Milou able to break the 4th wall without actually breaking it.

Pets also can bring more attention to a character's mannerisms or allow for their rumination to hold more illustration thanks to the pet's expression. They can even underline that the character is a villain.

Bonus points if the pet is also evil.

Pets might have issues and logistics that get in the way of plot (like transfer, travel, maintenance, etc) but a strategic choice of animal could resolve everything or, alternatively, illustrate the length a character will go for a pet's wellbeing. 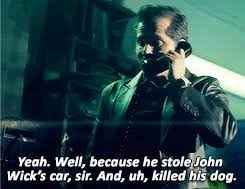 Are there pets in your comic?

I thought about this but for very advanced bots, sentinels or magic golems. They don’t really talk back but is loyal. It’s this odd emotions that they give off that is kind of attractive to me as a story. A real pet I think would be a little hard for me to write. A lot of things my pets do is repetitive and cute. I just don’t know how to expand beyond their way of life indoors. What I do plan on doing is introducing an advanced android that only do a few things. I just haven’t decided if it should be humanoid or animatronic pet of some kind. Interesting that it never crossed my mind to have pets in my story.

Don't go for the "revenge" angle. Pets should not be brutalized, that's the quickest way to turn off a huge amount of your potential audience forever, and you will not get them back. However, I think companion animals and pets and the like usually do add a great deal to stories. Whether it's subverting the trope, like Nanny Ogg's cat Greebo in Discworld, or being an active member of the main cast, like Bandit in Jonny Quest, it can say a great deal about a person if you look at how they deal with animals and how animals react to them.

I love pets in comics. Dogmatix in Asterix and Obelix, Garfield, Snoopy, Krypto in Superman, you name it. The purpose of a pet is to bring out another dimension of the owner, and be something cute in the background. Dogmatix brings out more in Obelix than just the big guy who punches. Garfield gives Jon Arbuckle a lot. Read Garfield Minus Garfield for proof. So, my favour is FOR pets. All of my comics have pets. My current comic, Phantasos is pet-heavy, in a digimon/pokemon kind of way. It's so fun to draw them, design them and fill the background with emotions.

At some point in my own comic I started to include a squirrel for no other reason than that (although it does sometimes serve as a foil for Tiger). I know it tends to puzzle some people when it doesn't appear to have any real function in terms of plot (such as there is), but that's simply because this is not the main point of putting in a pet. Both Blofeld and Gaston would work perfectly well as characters without any animal company, only the scenes would be that much poorer. A pet doesn't have to be Chekhov's pet! Would you trust your pet to a guy who thinks every gun has to be shot just because it's there? I don't.

Are there pets in my comic? ... uh, yes. Tiger has got quite a number of human pets and they also talk. ;) In fact, that's what most of the comic is about. In other comics, pets are a great supplement to a character - and if it's just to bring some character traits into focus, e.g. like Blofeld's white Persian cat to highlight his deceptive calm, deviousness and penchant to show off. In cartoons, no matter if it's a villain or a good one, the expressions of pet and owner mimicking each other does the same and it's always good for a laugh, too. Even if they don't do any of that, pets are a very effective means to bring more (background) action to the pages, livening everything up. If your main character is rather chaotic or sloppy, pets do a lot to enhance this aspect - think Gaston with his cat, seagull and other assorted critters.

One of my main characters have a rather unsual pet, a ringtailed lemur, which always have been one of my favorite primates, and she is also the mascot of my comic, and in my figurative art that I do on the side, having a watermark of her as well. Lemurs are in critical danger of going extinct and I use her to create more awareness of these amazing animals who origins from Madagaskar. (Since lemurs aren't suited as household pets I made her more magical and gave her more intelligent personality so she would be not so familiar to real lemurs, also she can have a mischiveious streak to her with stealing and biting, which is fairly mild compared to real lemurs who become rather vicious once they reach puberty in captivity.)

I watched Gene Kelly for his smile, for his energy. Vittorio Gassman for his movement. Clark Gable for his mustache. AND I WATCHED LASSIE WHO WAS HAPPY AS A DOG.

One of the first ideas I had and worked on for a comic strip revolved around a family dog. Oddly enough I've never done any of those comics for my webcomic. (I'd have to dig through my old papers to see if I can find my ideas and designs.) As for my webcomic I can only remember Hogan the duck in the Rhymes With Witch subseries who doesn't speak or think in words, but sometimes stares at the readers when the characters say or do something ridiculous.

My original inclusion of Jiro was actually because of an anime/manga standard since that was the original inspiration behind my story. A lot of animation (US and Japanese) and JRPGs have a "mascot character." Sometimes they are more of a main character or a comic relief, sometimes a pet. Always nonhuman with a relatively simple "cute" design. The main function is franchise recognition and marketing. You turn them into keychains and happy meal toys. You put them in the commercial bumpers. Final Fantasy has moogles and chocobos. Trigun has Kuroneko. Sprited Away has the soot sprites. Frozen has Olaf.

I have animals in my story, pets included. They do pet things. Dogs assist people. Cats help define spaces. Both help define characters through how they interact. Sometimes they can be plot devices. They are recurring characters but distinct from human ones. Jiro is a cat that lives in the bookstore. His favorite human is Tristan (who is not his owner). Puck the dalmatian is one of the most plot active because he is independent and a bit of a wild card, so human characters have to give chase sometimes. Two antagonists have dogs. One has a well-trained Doberman who is basically the most reliable "henchman" (the others can't be trusted). The other has a fat elderly beagle that helps define him as an empty nester. Used Books also contains working dogs like bomb detection and search and rescue. Conrad's castle is full of cats. Brad has a betta fish he dotes on in his little apartment. My world is full of pets, so the story isn't real to me without them.

Put them in as color. Like a character will have a cat in their lap, or a dog will be standing nearby. Acknowledge that there are pets, but they're not central to the story.

I think pets are more common in kid stories because kids tend to identify with them. There are also many stories where the pet is the hero, like Lassie.

In my novel, a kind of pet of Giselle will take a leading role. However, it is not a biological one, and it shall not remain a pet. One strand of the story will be about the evolution of this creature.