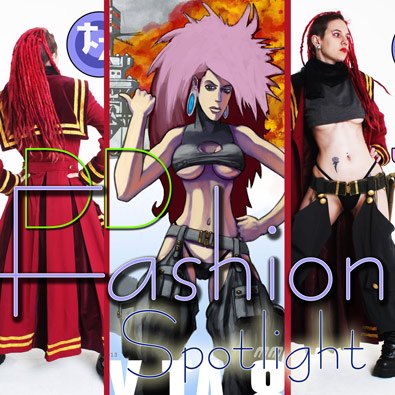 This week it's my own comic character, Pinky. I practice what I preach when it comes to designing outfits for comic characters… Pinky was designed in the late 1990s and it shows. At that stage ultra-violent, sexy anime was massive, the “riot grrrl” movement and it's watered down commecialised version “girl power” were in the air, Cyberpunk was hot, Industrial metal was popular, and alt-culture was big! Pinky was born out of that cultural soup.

Late 90s fashion was all about the bare mid-riff and crop-tops. Riot Grrrl gave us aggressive, in-your-face feminine sexuality. Alt-culture was typified by piercings, tattoos, body modification, and dyed hair. Industrial metal had black chunky clothes with straps and buckles, like the heavy duty version of Goth…
Military influence was popular in fashion at the time- This started with camouflage EVERYTHING worn as club wear and high fashion (NOT bearded men with guns as it is now), epitomised by camouflaged combat trousers which eventually morphed into cargo pants in the early 2000s. Everything was pockets because the cargo look was king. I even saw a pair of tight, hipster, pinstripe flares with cargo pockets on the thighs- which must have been the peak of the style.

You can start to get a feel for the firmament from which Pinky emerged… It's also important to remember that body modification wasn't as mainstream or as common in the 1990s as it is now and certainly not all together in the combination Pinky sports with dyed hair, tattoos, and piercings, which would have been seen as a little extreme. It's all a lot more acceptable and less unusual now, Pinky can be seen as individualistic and fashionable (which is actually what I originally intended), instead of slightly shocking -She was never meant to shock. Though her large ear plates were designed after looking through a book on Zulu tribal practices rather than a part of alt-fashion at the time. 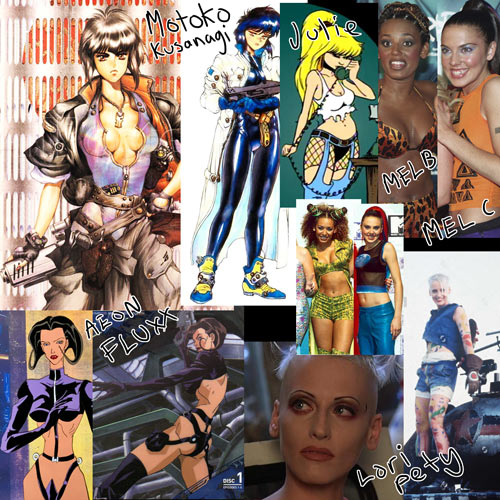 A few specific influences were Aeon Fluxx, Motoko Kusanagi from Ghost in the Shell, Lori Petty as Tankgirl, and Mel B and Mel C from the Spice Girls- all people and characters known for their edgy, sexy looks, confidence, and attitude. Pinky's trousers were inspired by those worn by Julie in the early scenes from The MAXX, though they're attached at the back as well as the front. Many of those characters wore large boots and I now realise that Pinky's combat boots are her true trademark: above all other items of clothing, whatever she wears, the boots are ALWAYS there! 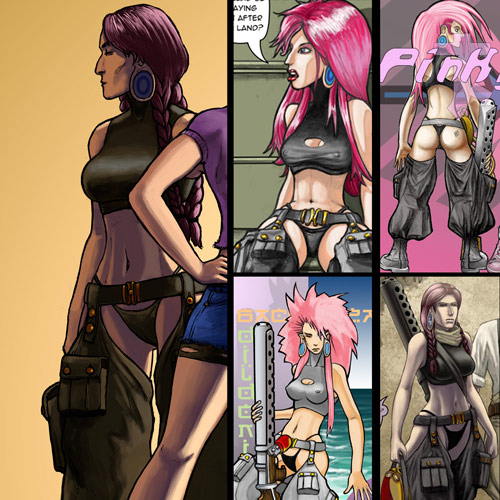 Pinky's coat was inspired by my love of military fashion. It has no direct influence though, it was simply a combination of things I liked all combined into something new: A military great-coat, box pleats with velvet inserts, gold accents, the cape from a sailor's smock, huge turn back cuffs, all done in rich crimson. Its extreme modesty is a great contrast to the immodesty of her standard outfit. 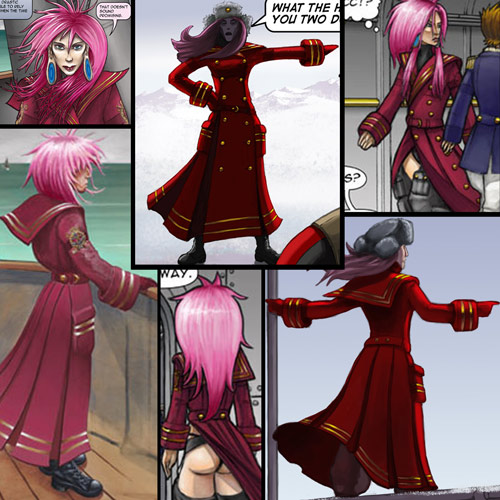 On the other side I was super into the styles of the 1920s, which is why I set the comic in that period. I shoe-horned some of that in, giving Pinky a “Flapper dress” and cloche hat. The outfit is nothing like a real flapper look, but it was my attempt to adapt it to the character. Pinky shares a similar outlook to a flapper- self determination, agency, independence, individuality, contravention of established norms, but in her own way. 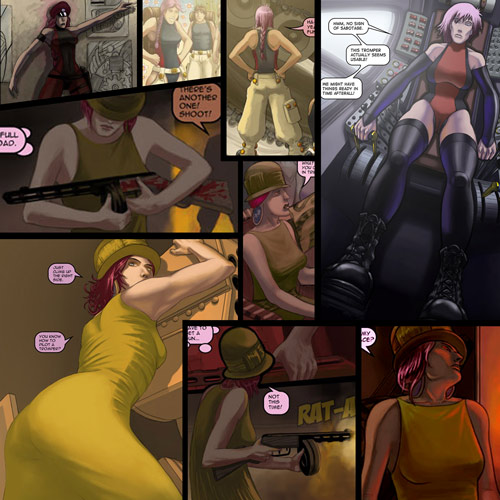 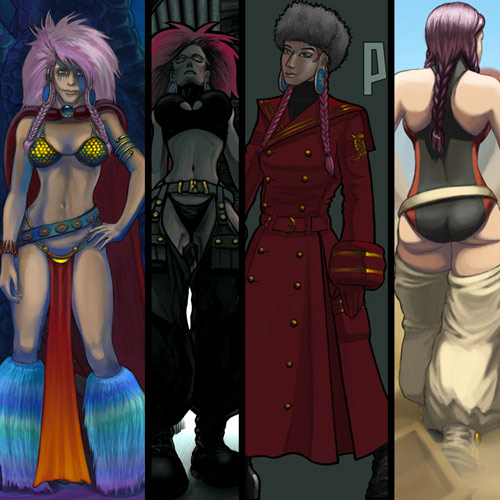 As the 2000s wore on Pinky's look has often been updated (particularly the bodysuit plus sand coloured trousers and gaiters with large buttons), but I always go back to her original look…
In an effort to promote my comic and have more fun with it a friend and I had Pinky's outfit made for real, which she cosplayed at San Diego Comic Con back in 2011. The outfit has since been modeled by others but the current “Pinky” is my friend Alexis Dawn, pictured here. 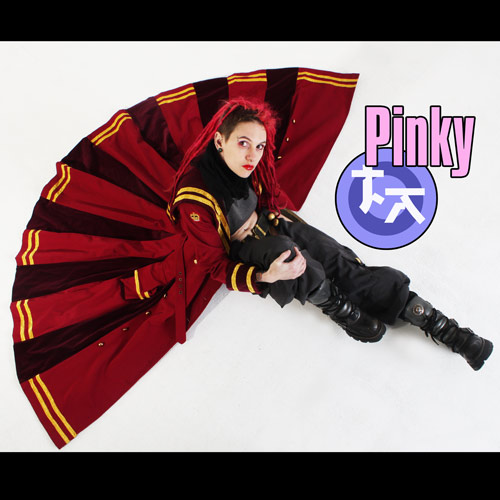 Alexis sports many of Pinky's traits- Tattoos, piercings, dyed hair, even small ear plates! What was once an unusual, alternative look is now normal, which is great! The present has caught up to Pinky and her style.
More of Pinky here - https://www.theduckwebcomics.com/Pinky_TA/.

@Amelius- My own fave combat pants from the 90s were Army surplus, ex Australian army. I cut them up in 2010 to serve as the prototype for the actual Pinky leggings as worn by my models XD

Thanks Amelius! If anyone wants to contact me with a breakdown like this of their own fashion influences in their comic I'll make a fashion feature of it :D

Gods I really miss 90's fashion. I remember the camo era! I got some camo pattern pants from a Goodwill, and I still have them as part of my wardrobe because new fashion has been major suck lately. Pinky's coat is incredible and I'm chuckling at the panel were it's blowing over and it's BUTTCHEEKS HI! XD Man I love seeing collages of artist's influences, you distilled a lot of cool elements into your character, it's just enough that you can see where things influenced but it never goes so far that she looks exactly like any of them, and as a character designer that's the sweet spot ya want.

I love Julie from THE MAXX!

You have a big archive of super-looking art to draw upon.